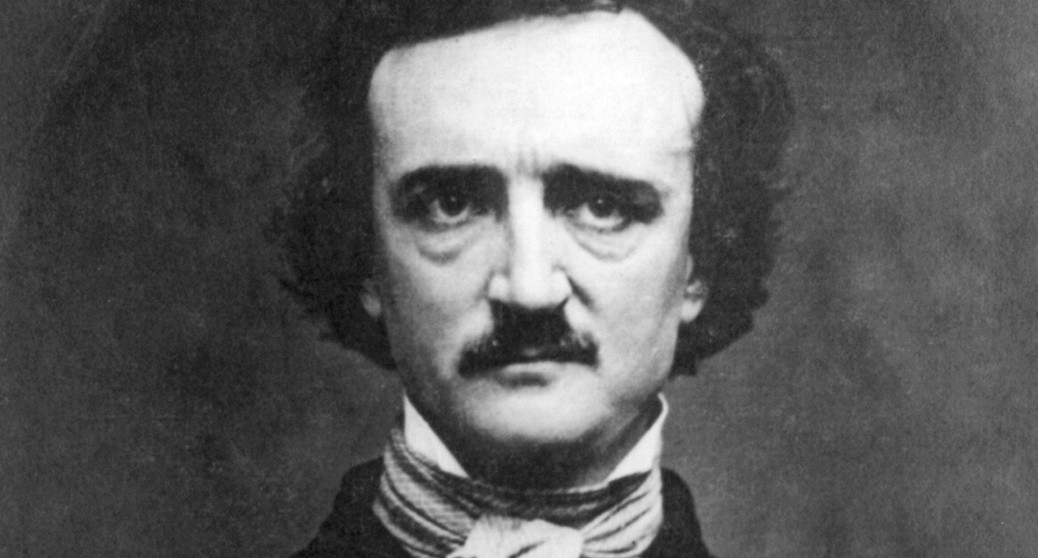 A fictionalized account of the last days of Edgar Allan Poe, James McTeigue’s 2012 thriller The Raven finds Poe (John Cusack)  in pursuit of a killer who is inspired by the author’s own tales of terror. Certainly, McTeigue takes liberties with the facts of the poet’s life (and death), but as fantastical as the film’s premise may be, the real circumstances surrounding his final few days are even more intriguing and — as would be expected from him — bizarre. Exactly how did Edgar Allan Poe die?

Heartbroken following the death of his wife, Virginia, Poe was physically transformed after 1847. His health was clearly in marked decline following her passing; one need only compare Poe’s life portraits to see the dramatic change in countenance. When the six daguerreotypes taken during the last eighteen months of his life are viewed in sequence following all other known life portraits of Poe, the rapid decline is startling. The almost unrecognizable robust man in his early thirties becomes haggard and wan by age forty.

Could the physical characteristics apparent in just these eleven known life portraits shed some light on the mysterious death of Edgar Allan Poe?

The most famous image, the “Ultima Thule” daguerreotype of November 1848 (taken four days after a suicide attempt), shows a man beleaguered and beaten. We are familiar with the haunting eyes and solemn expression. But a closer examination of the face reveals three distinct features not seen in earlier images of Poe: 1) baggy eyelids; 2) a drooping of the left side of the face; and 3) possible temporal arteritis, a condition in some men over 40 that can lead to headache, malaise, fever, weight loss and visual disturbances. The basis of the disorder is an inflammation of the lining of the temporal artery (in the scalp over the temple).

Its causes are many, but among them are two of the more plausible causes of Poe’s death put forward over the last couple of decades: diabetes (argued by David Sinclair, a Poe biographer, in 1977) and brain tumor (most recently put forth by Matthew Pearl, conducting research for his novel The Poe Shadow); this theory of a  tumor / possible brain cancer is based upon 1) a contemporary physician who concluded that he had “lesions on the brain”; and 2) eye-witness evidence of calcification of the brain following an exhumation of the body 26 years after his death).

Despite popular opinion — now and at the time of his death — Poe almost certainly didn’t die directly from alcohol poisoning; re-enforced by continued character assassination by both his own publishers and the many detractors who found Poe, the critic, less than kind with his reviews, that image has stuck. His contemporaries, however, while admitting that the man drank, did not find Poe to be someone who drank to excess. Yet consumption of even the smallest amount of alcohol resulted in apparent stupor and confusion. And in the weeks preceding his death, Poe had  joined a temperance movement.

This is not to say that Poe did not have his problems with alcohol.

In a letter to George Evelth, a medical student who wrote a fan letter to the poet in 1845, initiating a correspondence, Poe writes

“…I am constitutionally sensitive — nervous in a very unusual degree. I became insane, with long intervals of horrible sanity. During these fits of absolute unconsciousness I drank, God only knows how often or how much. As a matter of course, my enemies referred the insanity to the drink rather than the drink to the insanity. I had indeed, nearly abandoned all hope of a permanent cure when I found one in the death of my wife.” (January 4, 1848)

Later, the next month, on the wagon, Poe tells Evelth that

“I rise early, eat moderately, drink nothing but water, and take regular and abundant exercise in the open air.” (February 19, 1848)

This period of health was not to last, however; a year and a half later, writing to Maria Clemm, his mother-in-law, Poe says

“For more than ten days I was totally deranged, although I was not drinking one drop; and during this interval, I imagined the most horrible calamities. All was hallucination, arising from an attack which I had never before experienced — an attack of mania-a-potu.” (July 19, 1849)

A violent alcohol intoxication without having had a drop? Poe was no doctor; he used the language he could to express his condition.  But clearly, barely three months before his death, some other malady was at play.

Earlier that year, in writing to Annie Richmond, a close friend, Poe writes that he

Could the headaches and hallucinations have a common cause?

Certainly, a brain tumor could be responsible for these, and other symptoms. And while I won’t dispute the possibility of such a thing, a brain tumor would not explain years of sensitivity to alcohol nor would it normally result in the weight loss in his thirties then sudden weight gain evident in the daguerreotypes taken in Poe’s latter years. Excess cortisol in the blood, a result of stress (of which Poe had more than his share) can occur in both situations, but diabetes can certainly explain the sensitivity to alcohol throughout his life.

At the University of Virginia, for example, as early as 1826, Poe (as most young people do when away at college) may have overindulged. But curiously, one contemporary classmate, Thomas Goode Tucker, recalled that Poe

“. . . would seize a full glass, without water or sugar, and send it home at a single gulp. This frequently used him up; but if not, he rarely returned to the charge” (Letter from Tucker to Douglas Sherly, April 5, 1880)

A lightweight, so to speak, Poe’s intolerance for alcohol may have been rooted in his blood sugar. Untreated, diabetes could, over time, progress to nephrotic syndrome and damage to the kidneys, resulting in acute confusion from hypoglycemia — or even contribute to and/or trigger severe depression. In the November 22, 2010 issue of the Archives of Internal Medicine, one study showed that psychiatric disorders can be a risk factor for, as well as a complication of, type 2 diabetes. Perhaps his melancholy contributed to developing the disease.

Few who read the man’s poems, fiction and letters would be surprised to find Poe suffered from depression. The death of his young bride Virginia two years before his own could definitely bring on stress that would lead any man to drink; but in Poe’s case, the stress may have aggravated by pre-existing medical conditions that ultimately lead to his mysterious last few days: missing in the streets of Baltimore, disoriented, and found in clothes not his known (mostly likely due to the practice of “cooping”, whereby unwilling participants, some mentally ill, some drunk and most vagrants, were forced to repeatedly vote, often after a change of clothes).

So many factors may have contributed to Poe’s death that an accurate differential diagnosis — based purely on letters, a few (questionable) eyewitness testimonies, and some physical evidence that may or may not be apparent in a few photographs — may forever be impossible. Comorbidity of a number of health problems is more likely than any single smoking gun (metaphorically speaking, as there are many a theory as to Poe being murdered!).

In the end, whatever his afflictions, the popular image of Poe as little more than tortured soul, hopeless romantic, and terminal drunk  is ever more confounding. He deserves more than caricature. His life was hard. His enemies were many.

One such detractor, writing in the Knickerbocker Magazine in 1846, took a jab in a mock poem that questioned whether Poe’s so-called talent —a talent finally being recognized widely with the publication of “The Raven” the year before — was “excessive genius or excessive gin!”

I would argue it was all that and more. Excessive genius? To be sure. Excessive gin? Possibly. A touch. One drink would clearly intoxicate him. And to this, I add glucose. “Constitutionally sensitive,” Poe suffered from some medical condition — arguably type 2 diabetes — that, to the medical profession of his time, all but meant a death sentence.

Sad, then, that all that Poe may have needed in the hours before his death may have been a simple glass of fruit juice.

Look for yourself at the images of Poe made during his lifetime. See the dramatic changes in his appearance (and his apparent health) in the photographs linked below; they are presented in chronological order.

Note that where necessary, daguerreotypes have been “corrected” laterally. Daguerreotypes show laterally-reversed (or “flopped”) images. Everything in a daguerreotype was flipped: left was right and right was left. I have horizontally flipped images where necessary to show Poe’s face properly so that signs of age, stress and possible diabetes are oriented correctly — as if you were looking at the man.

For a complete visual study of the author in art and photography, see Michael Deas’ Portraits and Daguerreotypes of Edgar Allen Poe (1989), presented online by the Edgar Allen Poe Society of Baltimore.

For the Letters of Edgar Allen Poe, courtesy of the Internet Archive, click here » »

UPDATE: as of January 1, 2022, “Genius, Gin and Glucose” has logged 25,000 unique pageviews. By far, it’s the most read piece of anything I’ve ever written. Thanks to all of the Edgar Allan Poe enthusiasts out there!