Equal parts horrific, dated, gothic, stately and sometimes silly, Hammer Horror is a brand like none other in the world of genre cinema. For fans and devotees, it is almost religious. For directors like Martin Scorsese, going to the movies and seeing one from Hammer meant “it was a very special picture.”

Founded in 1934, but known primarily for its horror films of the  60s and early 1970s, Hammer all but collapsed into obscurity in the 80s and 90s, only to be gloriously resurrected recently with the infusion of new investors and the success of Let Me In (the English language version of Låt den rätte komma in (Let the Right One In)) along with the spooktacularly atmospheric Woman in Black starring Daniel Radcliffe.

For children of the 70s who spent their Saturday afternoons behind closed doors, glued to the tube while others played out in the terribly bright sunshine, Hammer films were the stuff of dark secrets — the cinematic equivalent of Playboy magazines hidden under the mattress. Hours were spent staring at blood run red and breasts laid bare.  This wasn’t your grandparents’ Dracula: no Bela Lugosi staked off-screen with a anti-climactic thud. This was the towering threat of Christopher Lee, writhing in agony as Peter Cushing’s vigorous Van Helsing pulls a Douglas Fairbanks, and with one great leap, yanks the drapes that strip the flesh from the vampire Count, exposing a toothy skeleton — one that pops and fizzles before dissolving into dust.

Tame by today’s standards, Hammer Horror kept the British censors busy with X certificates for decades. At it worst, the studio could be and, in fact, was accused of poor taste (even exploitation). But at its best, Hammer re-interpreted — even re-invented — many of Universal’s classic monsters for more modern, mature audiences. Dracula. Frankenstein’s monster. The Wolf-Man. The Mummy. Re-imagined. Made more menacing. All in vibrant color. Crimson wounds gushed. Dark green forests loomed. And flesh? Skin tones of the scantily clad Hammer stable of beautiful women lit up the screen.

Still, what made Hammer films all the more memorable — immortal even — was that good always triumphed over evil. The nihilism that so saturated genre film in the post-Vietnam period that followed Hammer’s heyday was as much a world away as the amalgam of unnamed eastern-European towns that were so often the settings of many of Hammer’s greatest films. A handful of them are explored in detail below; their trailers are included in a YouTube playlist:

The first of Hammer’s gothic horrors is also its first foray into re-imagining Universal’s monsters. Also the first pairing of director Terence Fisher with actors Peter Cushing (as the Doctor) and Christopher Lee (as the monster). Here, Hammer would establish its trappings: castles, costumes and a decidedly British sensibility that at the same time never existed yet was always there. Cushing’s charisma is captivating. And Terence Fisher, who would go on to make four more movies with both Cushing and Lee, sets the tone for every Hammer Horror film to come.

Lee’s Dracula is aristocratic, powerful and sexual. He would go on to play the Count more times than any other actor (10 total; 7 for Hammer), but no performance is more (un)dead “on” than Lee’s first. The aforementioned ending, with Dracula crumbling to dust in the sun, may very well be the best ending of any vampire film ever made.

Another successful reboot by Hammer directed by Terence Fisher and starring actors Peter Cushing and Christoper Lee, The Mummy is the least radical of Hammer’s overhaul of classic monsters, but its mashup of Universal’s many mummy plotlines (primarily The Mummy’s Hand and The Mummy’s Tomb) coupled with a very modern attitude regarding respect for antiquities makes it more than the standard moan and stomp fare.

Loosely based upon Guy Endore’s seminal novel The Werewolf of Paris (1933) and far superior to any of the Lon Chaney Jr. movies — from sets to cinematography to a gripping performance by an overzealous Oliver Reed — Curse of the Werewolf curiously did not spawn a franchise for Hammer. The studio’s only experiment with lycanthropy, it remains one of the better werewolf movies ever made (the best, of course, being An American Werewolf in London).

While not the best of director Fisher’s work with stars Cushing and Lee, The Gorgon is interesting for its odd choice of monster from mythology that turns the villagers of a middle-European town to stone. Ignore the sillier scenes where it’s clear that the lady is wearing a wig of rubber snakes and enjoy the creepy atmosphere and solid performances, once again, from Cushing and Lee.

Christopher Lee’s return to the role that made him famous finds the actor with nary a line of intelligible dialog nor a foil as compelling as Van Helsing; still, the formula works.

Two years before George Romero gave new, um, life to the genre, Hammer produced a zombie picture with something uncharacteristic for the studio: a political message — one of the aristocracy abusing and exploiting the working class. Oh, and it’s scary, with iconic images of limbs erupting from the ground.

Directed by Terence Fisher. Based on a Dennis Wheatley novel. Scripted by Richard Matheson. Starring Christopher Lee (in what he considered to be one of his best roles). About a satanic cult. Culminates in the evocation of the Angel of Death. What more could any Hammer fan want?

Inspired by Sheridan Le Fanu’s novella Carmilla and the first of three Hammer films to feature the Karnstein family of vampires, The Vampire Lovers made overt the sexuality that was always at the core of Hammer’s vampire films. Relaxed rules by the British censor and changing attitudes towards sexuality as the 1970s began meant all bets (and clothes) were off.

If Vampire Lovers opened the door for Hammer to explore the intersection of horror and sexuality, Dr. Jekyll and Sister Hyde broke through its wall. While at times silly (from the immortal power of female hormones to some of the film’s promotion via trailers and posters [EXCEPT the cool French poster shown here), it stands as one of Hammer’s most original offerings. From its script (which incorporates both Jack the Ripper and the body snatchers Burke and Hare) to its oddly look-a-like stars Ralph Bates and Martine Beswick, Dr. Jekyll and Sister Hyde ultimately succeeds because — as he did with The Vampire Lovers — director Roy Ward Baker plays the sexual themes, for lack of better words, straight.

No studio before or since more radically redefined gothic horror than Hammer. Though their reach may have exceeded their grasp, Hammer’s producers, directors, writers and actors pushed the limits of what horrors could be explored in cinema while still retaining that magic of film that is created when more is left to the imagination than on screen. By the mid seventies, audience tastes towards more explicit (Texas Chaninsaw Massacre) and big budget horror (The Exorcist) found Hammer scrambling to find its place. Ultimately, the studio stopped making as many features, explored other genres (kung-fu and urban thrillers among them), turned briefly to television, and then, finally, went into receivership.

The brand, however, survived, and with its recent successes among 21st century moviegoers, the “studio that dripped blood” (a title of a 1987 Hammer Films documentary) may possibly be back with a vengeance.

Fans can only hope.

Those wishing to explore the world of Hammer films further will find the following books invaluable: Marcus Hearn’s The Hammer Vault: Treasures from the Archive of Hammer Films along with The Hammer Story, also by Marcus Hearn with Alan Barnes (including a foreword by Christopher Lee).

For the die-hard Hammer fan, there’s also Hammer Films: The Unsung Heroes, a limited edition by Wayne Kinsey (with a foreword by Barbara Shelley) that goes into great detail about the many people that comprised “the team behind the legend.”

All titles are available from Amazon.com (along with this blogger’s book of fiction). Excuse the shameless self-promotion. 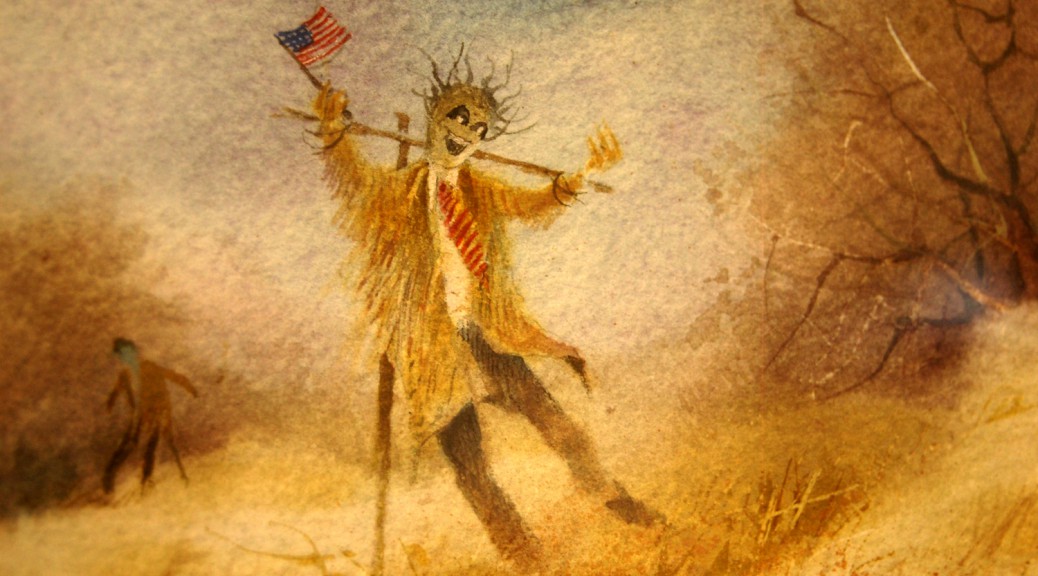 Scarecrows. Ancient Egyptians hung tunics on reeds to scare quail away from crops that grew along the Nile. Wooden statues of Priapus, a well-endowed rustic fertility god, likewise frightened birds from planted fields in Greece. Even the Japanese, as early at the 8th century, had the Kuebiko to keep sparrows from the rice; in Kojiki (a Record of Ancient Matters) (circa 712), it is written that “though his legs do not walk,” Kuebiko knew everything.

Known as bootzamon to German settlers and Tattie Bogies to the Scots, scarecrows, culturally (if not etymologically) have long been tied to the supernatural boogeyman, a monster of legend who is, curiously enough —like the scarecrow — often depicted in tattered clothes. To a superstitious agrarian society, it would seem that there was utility in not only frightening birds, but scaring children as well. There are strange things out there among the rows. You’d do best to avoid them.

Yet monsters need not always be evil. Many, in fact, like the creature in Mary Shelley’s Frankenstein, simply want to be human.

Others believe they are human.

Take for example the title character in Nathaniel Hawthorne’s 1852 short story “Feathertop.” A scarecrow brought to life by a  witch seeking revenge on a judge, Feathertop appears human — and believes himself to be so — as long as he puffs on a pipe given to him by the old crone. He falls in love with the judge’s daughter Polly, only to have her recoil in horror when the couple gaze into a mirror and Polly sees Feathertop in his true form. The daughter thus made despondent, the witch has her revenge, but the cost is the despair of her creation: a “wretched simulacrum.”  Aware of rejection, Feathertop dejectedly drops his pipe and falls into a lifeless heap.

“There are thousands upon thousands of coxcombs and charlatans in the world, made up of just such a jumble of wornout, forgotten, and good-for-nothing trash as he was!” reflects the witch. “Yet they live in fair repute, and never see themselves for what they are.”

Two months before the unimaginable happened on 9/11, Florida artist Win Jones created his “Patriot Scarecrow Series.” Simply meant to be a scarecrow with an American flag — painted for its color — the image became a symbol that the artist did not intend.

“I was listening to this guy talk, a young man, college age, he was telling me, look, they’re all dressed up, fit to kill,” Jones said of his scarecrow, brandishing what by then, in late 2011, was draped over every window and rising on every pole. “Oh, my God, am I thinking that? I don’t think that I am, but subconsciously like a lot of these… you react to them. But that’s where I am at now with the scarecrows, and all these ghosts that are coming in and out of space, you’re not too sure where you are.” (Win Jones, taken from FlagerLive.com, “a news source for Flager, Florida and beyond”)

Deep within our psyche, we need the scarecrow — and this need exceeds the utility of frightening birds. He is, in Jungian terms, the shadow: an archetype that is the inverse of the ego. He is supernatural.

Be it the self-aware Feathertop or the all-knowing Kuebiko, the scarecrow is at once less than and more than us.

He is Dorothy’s clumsy companion from the Wizard of Oz and the terrifying  villain of the Batman’s rogues gallery — a psychiatrist who preys on our fears.

In the end, he is whatever we want him to be. He is truly a straw man: a distorted, exaggerated version of ourselves — foreign and familiar.

Dress him as you like. He will take on a life of his own.