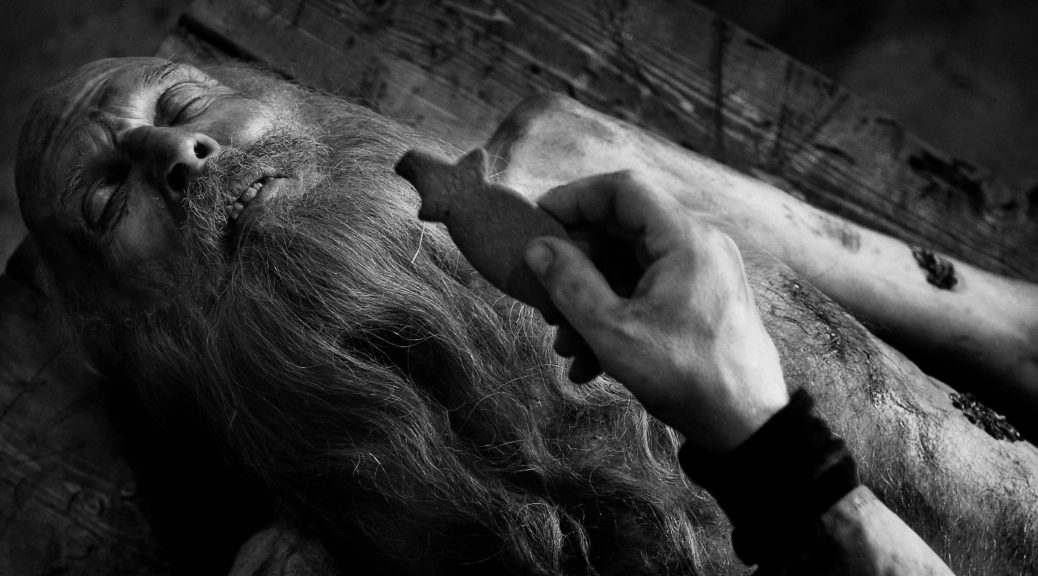 Santa Claus can be just as dangerous as he is generous. Take, for example, RARE EXPORTS, a 2010 Finnish horror film that Roger Ebert called “an original, daring, carefully crafted film,” in which reindeer herders find their Christmas holiday made nightmarish by a murderous supernatural being resembling old Saint Nick.

A tradition begun in the 1970s with BLACK CHRISTMAS — the story of a psychopath stalking sorority sisters during the holiday season — yuletide murder movie mayhem had its heyday among the slasher flicks of the 1980s with titles like CHRISTMAS EVIL (the first to feature Santa himself as serial killer), TO ALL A GOOD NIGHT, and the franchise launching SILENT NIGHT, DEADLY NIGHT.

After a relative lull in the 1990s, the new millennium saw the release of SANTA’S SLAY and foreign imports, like the aforementioned Finnish effort, as well as a 2011 Dutch entry simply called SINT (a.k.a. SAINT).

With almost forty films in as many years, the sub-genre of horror at the holidays is oft-overlooked by those who study cinema. Whether merely meant as crude attempts to capitalize on cultural mash-ups, or revealing something more sinister in the human condition, these movies, regardless of quality or taste, are inherently subversive. They invert our expectations of familiar icons and imagery, replacing joy with terror. Goodwill with paranoia. Peace and tranquility with dread and anxiety.

But why? Are filmmakers, consciously or not, taking the piss out of Christmas because, in modern times, the season has meant for many the rise of status anxiety in an ever expanding culture of commodity? Is the promise of instant gratification reinforced by media and merchandising too overwhelming for many? Perhaps the pressure-release valve often provided by the horror film helps to stave off the depression, disappointment and stress experienced by many during the holiday season.

Though the belief in increased suicides during the holidays is just a myth, stress — at any time of year — is reported now by 22% of Americans — and depression, according to the Canadian Mental Health Association, Ontario, is more frequently reported. Films that depict psychopathic Santas or holiday killers may therefore serve as an outlet for those left cold by the trappings of Christmas. But this argument is somewhat reductive. Fear of Santa certainly precedes the cinema.

Part jolly old elf and part malicious imp, the Santa Claus of popular imagination can be scary. He is a man dressed strangely, behaving oddly, and his form of greeting — “ho ho ho” — can be downright disturbing.

FATHER CHRISTMAS AND THE RANDY MAN OF THE GREEN

A far cry from the 4th century saint and bishop of Myra to which he is tied, Santa Claus is an amalgam of many a myth and much mirth: colorful, plump and full of life and vigor, he is the giftgiver Saint Nicholas, the Dutch Sinterklaas, the caricature drawn by Thomas Nast, and the nocturnal visitor of Clement Moore’s 1823 poem. He’s been used to sell everything from cigarettes to toy guns to Coca Cola.

But Santa Claus, by any name, is considerably more akin to pre-Christian notions of the Green Man — a figure that is equal parts celebratory and dangerous — than he is to any Christian saint or Madison Avenue pitchman. And it is in the folklore of the Green Man that the origin of Santa as sinister may lie.

Who is this Green Man? Though a term coined only as recently as 1939 in an article entitled “The Green Man in Church Architecture,” the motif of a wild man tied to vegetation and the cycle of growth, death and rebirth is found in many cultures. A good-natured, bacchanalian figure, the Green Man is welcome in most cultures. He represents the return of “the green” to the world following the year’s darkest day in December (the time of “Yule” among Germanic peoples). and, as Jack-in-the-Green, a sprite of sorts that leads May Day celebrations.

Wild and free as he is, however, the Green Man also has a darker side. His freedom means a lack of inhibitions. A willingness, desire and capability to do as he pleases. At his extremes, he could even be cast as the Christian Devil, argues Mary Neasham in her Spirit of the Green Man (2007) for he is”an acknowledgement of the powerful forces of nature” and a “reminder that we ignore these [forces] at our own peril.”

In Great Britain, Greek, Roman and Germanic influences converge over time to take the pre-christian construct of the Green Man, fuse him with pagan celebrations, and form the figure of Father Christmas;  figuratively (if not literally) Father Christmas springs from the Green Man. He is life. He is the return of the Sun. His lore is thus inexorably tied to Christmas and its trappings. A secular figure who shares with Christ the personification of a return of light and life to the darkness.

It should be no surprise to anyone that Christian holidays were superimposed upon, act as a substitution for or simply coincide with pagan festivals. However, cultural anthropologists, Jungian psychologists and even some historians now argue that the transition of pagan to Christian in both the west and east was not sudden; it was stretched over centuries, and the lines of transition are blurry. The date of Christmas, for example, December 25, is set in 274 by the Roman emperor Aurelian to commemorate Dies Invicti Solis (the Day of the Invincible Sun); Aurelian takes his inspiration from the eastern cult of Mithra. But there are some scholars (including an Associate Professor of History at Muhlenberg College) that believe that Aurelian, hostile to Christians, may have been imposing a pagan celebration over a date already established by the early Church. However its evolution — the overlap and transitions of pagan to Christian or Christian to pagan — were shaped over centuries.

Some would argue the process is still ongoing, if only on a subconscious level. And that it’s healthy. The Yin and the Yang. For the good of society, we may actually need to secularize religion on occasion or, conversely, find the divine in what is otherwise creations of man. Or both. It’s all in the way you look at things.

Charles Dickens’ A Christmas Carol (1843) is a fixture of modern Christmas tradition. Dickens, a man who struggled with his faith — most likely taking inspiration from Washington Irving’s depictions of Christmas traditions in The Sketch Book of Geoffrey Crayon, Gent (1819-1820) as well as renewed interest in all things Christmas during the Victorian period (including cards and Christmas trees) — writes his classic tale of a bitter, spiteful man who learns to embrace the Christmas Spirit without ever mentioning the birth of Jesus.

Secular images of Christmas abound, and though Christ cannot be found in A Christmas Carol, the Green Man is arguably there in the figure of the Ghost of Christmas Present.  Though never mentioned as such by Dickens, this ghost is equal parts Bacchus, Father Christmas and Santa Claus.

The second apparition to appear to Scrooge, The Ghost of Christmas Present appears as “a jolly giant” with a “cheery voice” and “sparkling eye”; he is bedecked with objects often associated with Santa: a holly wreath and shining icicles. But this ghost, unlike the old man with a white beard, is certainly much younger — more virile and full of vigor. With dark brown curls, “long and free,” the Ghost is quite unlike Santa. He wears a fur-lined green robe (that Dickens’ illustrator, Charles Leech, first made red, curiously enough) with a scabbard (but no sword) at his side. His feet are bare.

While not quite the white-bearded, rosy-cheeked Santa known to Americans, Dickens’ ghost and Father Christmas are certainly connected (if only in the contemporary and modern reader’s mind by his demeanor and clothing). What a strange turn, then, that Dickens uses the ghost to show Scrooge one of the more disturbing images in the entire tale (yes, worse than Scrooge’s own death!); these are the haggard and wan children hiding behind the folds of the ghost’s green robe: the boy, Ignorance, and the girl, Want. Withered, like spoiled fruit never to grow strong, these are Man’s children. And the boy literally bears a mark of doom.

This juxtaposition of joviality, excess and good humor with man’s inhumanity to man is intentionally jarring. The Ghost shifts from comforting companion to an uneasy, potential threat. For he carries with him the truth of ugliness in the world. As Green Man, he is Neasham’s reminder that “we ignore these [forces] at our own peril.”

M.H. Abrams, in his seminal book of literary criticism The Mirror and the Lamp: Romantic Theory and the Critical Tradition (1953) offers a simple paradigm as art either holding up a mirror or a lamp to society. The mirror reflects the real world. The lamp illuminates. And while Abrams was effectively using the metaphor to discuss the radical shift in art ushered in by nineteenth century romanticism, it is interesting to place A Christmas Carol under Abrams’ critical lens. Writing on the cusp of the end of the Romantic period and the beginnings of later nineteenth century realism, Dickens may have effected a melding of the two schools: a Romantic Realism of sorts. For in the Ghost of Christmas Present, especially, Dickens both holds the mirror that shows ignorance and want while offering a romantic view of Scrooge’s salvation and subsequent passion to change the world for the better.

But dichotomous nature of such a figure makes many uncomfortable. As far back (or recently, depending on your perspective) as the seventeenth century, Puritans in both the old world and new hotly debated the celebration of Christmas; should a solemn observation of the birth the Savior become an excuse for drunken frivolity? (for more, see Chris Durston’s article “Lords of Misrule” in History Today) Over four-hundred-and-fifty years later, the same debate continues. “Keep Christ in Christmas” is an oft-used phrase on everything from bumper stickers to billboards; but to some, many of the traditions of Christmas — with deep pagan roots — mean Christ is there in name only.

To have Santa Claus a symbol of Christmas means embracing all aspects of the amalgam that he is.  Born of the wild and the green, he is beyond Christian, but has been tamed and tailored to fit the Christian tradition.

For many, the dual nature of Santa Claus is acceptable. Most of us welcome his Dionysian abandon while respecting the ever-watchful Saint — perhaps because this dual nature is exactly what we aspire to and/or fear within ourselves.

Take sainthood to its limits and you approach godliness. The all-giving acts of the selfless. Old Saint Nicholas.

Take wild abandon to its extremes and you become an animal. The all-consuming acts of the selfish. Old Nicky.