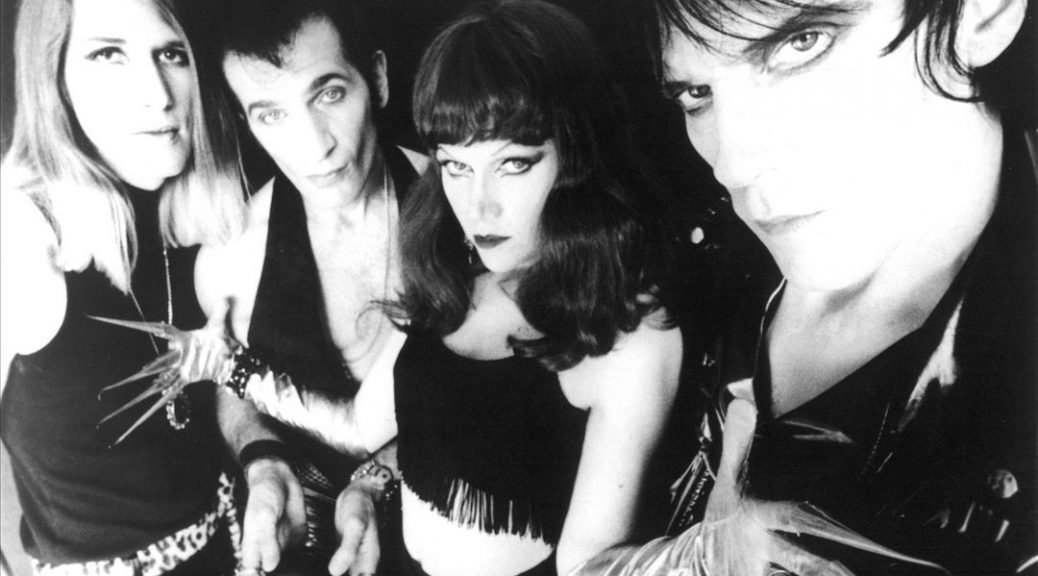 If Elvis Presley were to have had illegitimate children with both Vampira and Bettie Page, the result still wouldn’t have come close to spawning THE CRAMPS.

Influenced by early rockabilly, rhythm and blues, garage rock and surf music, THE CRAMPS unofficially began when Lux Interior (born Erick Lee Purkhiser) and Poison Ivy (born Kristy Marlana Wallace) met in Sacramento, California in 1972. A mutual admiration for the rockabilly of Ricky Nelson (to whom every CRAMPS album is dedicated), the surf sounds of Dick Dale, garage bands like The Standells and The Gants, and the glam rock of the New York Dolls and T. Rex, would turn into a lifelong love affair for the pair, lighting the spark for a new kind of music that they coined as “psycho-billy” (or “voodoo psychobilly” as the term would appear on their early fliers). Though soon abandoned by the band themselves (and picked up quickly by an act called The Meteors that have claimed ownership of it ever since) the label “psycho-billy” stuck. But with Ivy’s Carl Perkins-esque guitar and Lux’s near inhalation of the microphone, THE CRAMPS became something other than the sum of their influences.

NOTHING BUT THE GRAVEST OF HITS

Releasing their first EP, Gravest Hits, in 1979 (which included a cover of The Trashmen’s “Surfin’ Bird”), THE CRAMPS were well cemented in the CBGB punk movement of the late seventies and early eighties, playing alongside bands like Television, Blondie, The Damned, The Ramones, and The Talking Heads. But unlike some of these other American punk rock acts, THE CRAMPS were never to surface with a hit song until well into the nineteen eighties.

First came  “Can Your Pussy Do The Dog?” followed by “Bikini Girls with Machine Guns”. But while both songs charted (well in the UK), THE CRAMPS remained little more than garage band. Punk gave way to the new wave, with bands like The Smiths — who once opened for THE CRAMPS at the then recently revamped 40s swing club “The Meadowbrook” in New Jersey — rising to a level of popularity that Lux and Ivy would never attain. But an extremely dedicated cult following — coupled with Lux and Ivy’s passion for the music and each other — carried the band through the nineties playing smaller venues, and then well into the first decade of the twentieth century, where younger and younger crowds came out in increasing numbers, recognizing Lux and Ivy as punk rock progenitors.

Appreciated by fans and critics alike for all things kinky and campy (never better expressed than in 2003’s fetish-filled  “Like a Bad Girld Should“), THE CRAMPS continued strong well into the twenty-first century until tragedy struck on February 4, 2009 when Lux suddenly died due to aortic dissection at the age of 62.

In the end, beauty is in the eyeliner of the beholder. And while it would be hard to classify the music of THE CRAMPS as beautiful, the love shared by Lux and Ivy — the very heart of the band — may be one of the more beautiful love stories in all of rock and roll history. His worship of her and her playfulness with him kept the pair forever young.

Though they may not be remembered for much in the years to come, three events certainly solidify THE CRAMPS‘ place in rock and pop culture: