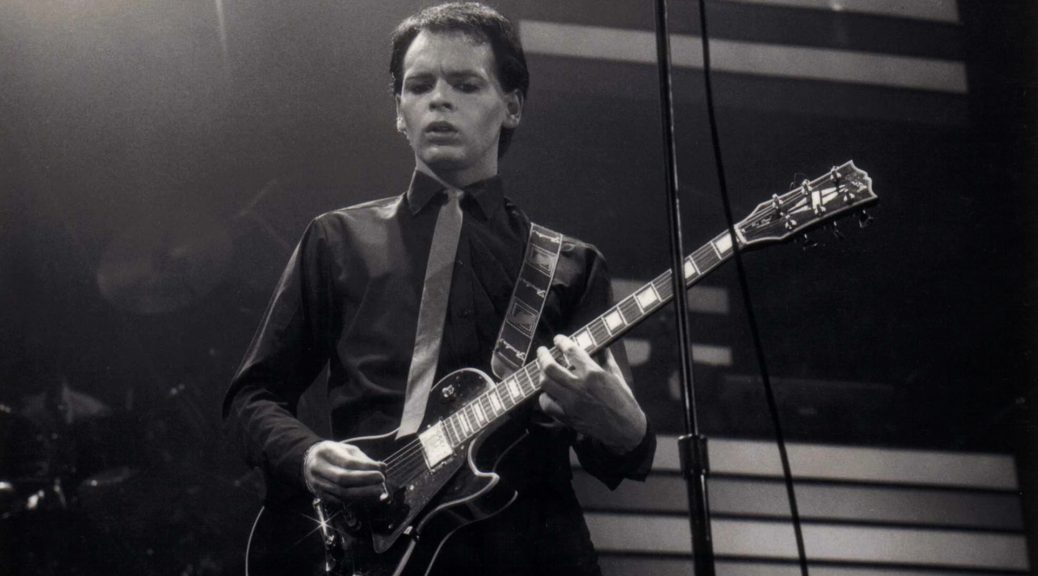 Numan, primarily known for the 1979  earworm “Cars” (a song used to advertise everything from automobiles to, most recently, Target stores) , rode the crest of the nineteen eighties new British invasion. His success was bolstered by a then burgeoning MTV — which following its launch in 1981 only had about 200 videos to cover its 24/7 rotation; the result: clips like “Cars” were shown at least once a day. It also helped that the single had one of the catchiest bass riffs ever, complemented by the then still relatively new technology of two moog synthesizers.

Numan, however, working in the late seventies with his band Tubeway Army, was no “one-hit wonder” in his homeland; previous releases were quite successful: 1978’s Tubeway Army opens with the unforgettable “Listen to the Sirens”; 1979’s Replicas, which includes the stark and sinister classic “Down in the Park” also spawned a #1 hit single in the UK with “Are Friends Electric?”

Combining the synthetic sounds of synthesizers with the acoustic punch of a solid rhythm section, Numan’s quite deliberate pop sensibility stood in stark contrast to the themes of a cold, dystopian future revealed in his lyrics and embodied by his often emotionless, robotic voice.

Inspired by the works of Philip K. Dick and J.G. Ballard as was (the far superior band of the same period) Joy Division,  Numan and others found themselves in the wake of punk but before the dawn of “college” or “alternative” rock.  They were the “new wave” — a label rarely used by the bands themselves but quite appropriate seeing as how their literary idols Dick and Ballard were known as part of the “new wave of science fiction” in the late 60s / early 70s just as filmmakers  Jean-Luc Godard and François Truffaut were referred to by critics of their time (the late 50s and early 60s) as La Nouvelle Vague. Seems there was always some new wave in art; why not let the critics assign the label. What did it matter?

Numan himself referred to his work as “machine rock” — a likely antecedent of  the “industrial rock” moniker applied to bands like Ministry, KMFDM and Nine Inch Nails a decade later. But even among contemporaries, these labels favored by critics were the stuff of comedy and competition among the artists themselves.

Ian Curtis, for example — the  enigmatic genius who fronted the brief but brilliant Joy Division — seemed unimpressed by any labels assigned by music journalists — as well as any forced comparisons among diverse acts; when asked by a reporter who compared Joy Division to Gary Numan and wondered what Curtis thought of Numan’s claim that “machine rock is the future,” Curtis replied:  “No disrespect to Gary Numan, but what we do is what we do.”

Perhaps the label that fits best, then, is the one used by writers for Sounds magazine in the mid to late seventies: post-punk. In the wake of the spirit of DIY, aggression and rebellion that was punk, a new movement emerged. To paraphrase an astute observation made by someone uncredited in an April 2005 issue of Mojo Magazine writing about Joy Division, this movement, instead of saying “fuck off” said “I’m fucked.” Thus is summed up the aesthetic for many of the British bands of the late seventies and early eighties (the Cure, Echo and the Bunnymen, and [the band that rose from the ashes of Joy Division] New Order — just to name a few) — an aesthetic even evident in the more accessible work of Gary Numan: the paranoid “here in my car, I feel safest of all / I can lock all my doors” quickly turns to the lonely plea of “will you visit me, please, if I open my door?” Intentional isolationism. Losing one’s self in the machine. These were among Numan’s major themes.

Though never taken as seriously as other often over-serious artists of the period, Gary Numan is unarguably a progenitor of modern alternative rock. As such, he deserves our attention with his return this coming Fall. The single from the forthcoming album, “I am Dust” is currently available for streaming on his and other websites (and is included as an embedded object here). 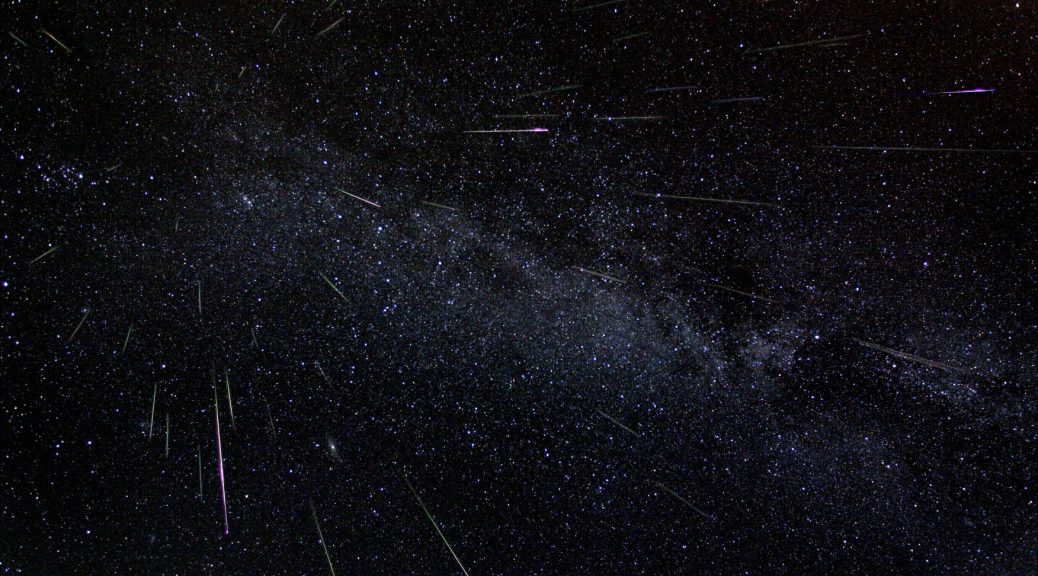 When we look to the sky, our imaginations soar. But for many people — ancient and modern, across wide expanse of geography and culture — the night sky has meant nightmares. And among those things of which some cultures are still afraid are oft-misunderstood meteors.

Every August around this time, our planet passes through debris from the comet Swift-Tuttle. The result: the Persied meteor shower (named for the constellation Perseus, out of which the perseids seem to appear). Igniting the night sky with sudden and often striking streaks of light, these meteors — simply bits of dust and ice — will burn up in the earth’s atmosphere just as the eye catches glimpse of them. Rates can get as high as 100 meteors per hour.

Many of us will marvel at the event. Most will sleep through it. But some will actually avert their eyes.

In many parts of eastern Europe, for example, among some Slavic peoples, seeing a meteor sets one ill at ease. For it is believed that everyone has a personal star that falls upon his or her death.

Residents of the village of Carancas in Peru became convinced that they were sickened by a meteorite that fell to earth in September, 2007.

Indeed, in the Book of Revelation, such sickness is foretold when an angel blows his trumpet and a star falls from heaven “blazing like a torch.” Contaminating a third of the world’s rivers and springs, “many died from the water, because it was made bitter.” (Revelation 8:10-11)

In ancient Egypt and Greece, meteorites were thought to be of the gods, and were venerated as such. They were objects to revered, not so much as feared, but nonetheless were seen as portents of something momentous.

There is even evidence among early Native American peoples that meteors were seen as omens — of good times and bad. Among the latter were the Blackfeet of Montana who believed a meteor was a sign that sickness would come to the tribe in the coming winter. Then there were the Cahuilla of southern California that believed meteors were signs of the spirit of their first shaman, Takwich. Disliked by his peole,  Takwich was said to wander the night sky, looking for Cahuilla that had wandered from their tribe so that he could fall upon them and steal their spirit.

Most comically, the Nunamiut Eskimos and the Koasati of Louisiana believed meteors to be the feces of stars.

Still, for every tale of doom, gloom and celestial excrement, there are dozens more from cultures from all over the globe that tell of good fortune follows the sighting of a meteor. Indeed, as children of Disney, we are told that when we wish upon a (falling?) star, our dreams will come true.

So this weekend, if you decide to look to the skies, keep in mind that if there is any meaning in the sighting of meteors, it is in the eye of the beholder. Perhaps better than seeing meteors are signs of good or ill from the heavens, we should instead look to celestial events as inspiration for living. For after all, we live but a short time, eventually burning out in the atmosphere of our own lives. We are not permanent. We need not live in fear of anything except that which prevents us from truly living.

Jack London once wrote: “I would rather be a superb meteor, every atom of me in magnificent glow, than a sleepy and permanent planet. The proper function of man is to live… I shall not waste my days in trying to prolong them. I shall use my time” (The Bulletin, San Francisco, California, December 2, 1916).