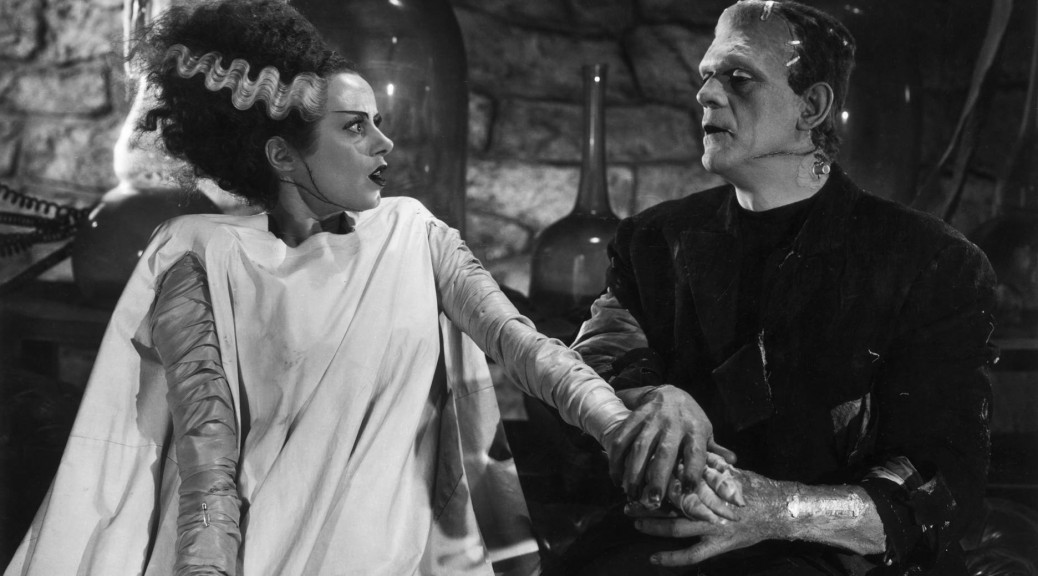 Although lauded for their archetypal images, gloriously gothic sets and stark cinematography, the Universal monster movies of the 1930s and 40s are often criticized for deviations from and oversimplifications of their literary, folkloric and mythological source material.

Where Karloff’s creature could only grunt, Mary Shelley’s man-made man read Milton. Stoker’s wild man of a vampire, a pointy-eared, bushy-browed mustached aristocrat, is a far cry from Lugosi’s thin-lipped, slickly coiffed and quaintly caped count. And what self-respecting werewolf — save Lon Chaney Jr.’s — would run amok in dress pants and a button-down shirt?

Yet, over seventy-five years since the release of Universal’s Dracula (1931), Frankenstein (1931), [the superior] Bride of Frankenstein (1935) and The Wolf Man (1941), Universal’s monsters are still the definitive versions of these pop culture icons, and for good reason.

A picture is worth a thousand words. And while it is undeniable that twenty first century audiences have the advantage of 24 hour access to a constant stream of tens of thousands of pictures, cinema goers of the thirties and forties had something  that very few living have today:  a singularity of shared cultural experience. Born of the shadows of German Expressionism with sights and sounds the silent age couldn’t offer, horror films of the thirties and early forties were one of the few forms of escape for audiences under the tremendous weight of the real horrors of the Great Depression. That shared experience was like an atom bomb dropped on the cultural landscape. Yet unlike the fears of the bomb (and all manner of death from the skies) that defined horror films of the fifties, the monsters of Universal’s heyday had a odd innocence and air of dread that made them all the more… human.

The penultimate, heartbreaking scene from James Whale’s Bride of Frankenstein is reason alone why Universal’s monsters leave an indelible mark on most viewers. As Karloff’s creature reaches out for his newly made bride, beckoning with shaking hands, her rejection is palpable. Filled with tension, all at once the scene is comic, hopeful, repulsive and devastating.

Horror works best when it plays on a range of emotions. The sustained beat of much of modern horror with its often relentless assault of gore certainly has its place. But one need only watch something like the recent, brilliant episode of THE WALKING DEAD entitled “The Grove” to see the difference between monsters and the truly monstrous.

Beneath the superficiality of often short-sighted scripting, Universal’s monster movies were effective because of their humanity. Commenting on Jack Pierce’s (and later Hammer Horror’s version of) the Frankenstein monster makeup alone, Stephen King, in Danse Macabre, states that effectiveness simply:

“there is… something so sad, so miserable there that our hearts actually go out to the creature even as they are shrinking away from it in fear and disgust.”

Long after any blood hits the screen, the lasting impressions of the horrible and grotesque in cinema lie in their ability to engage our sense of dread. Whether we cringe or jump, laugh uneasily or sit frozen, pulse pounding, watching horror films provides us with release. It is the release from knowing what lies at the heart of nature. That there is something within the human condition that sublimates yet secretly knows that we all must inevitably confront the horror that comes with simply being. It is a horror that ends in death.

“We belong dead,” says Karloff’s creature at the end of Bride of Frankenstein, devastated emotionally as he literally brings down the house. And while that action may seem quaint and comical to modern, more sophisticated (and possible jaded) audiences, Universal’s monsters share with currently popular, quality shows like THE WALKING DEAD an understanding of the human condition and therefore an undeniably powerful undercurrent of what true horror can be.