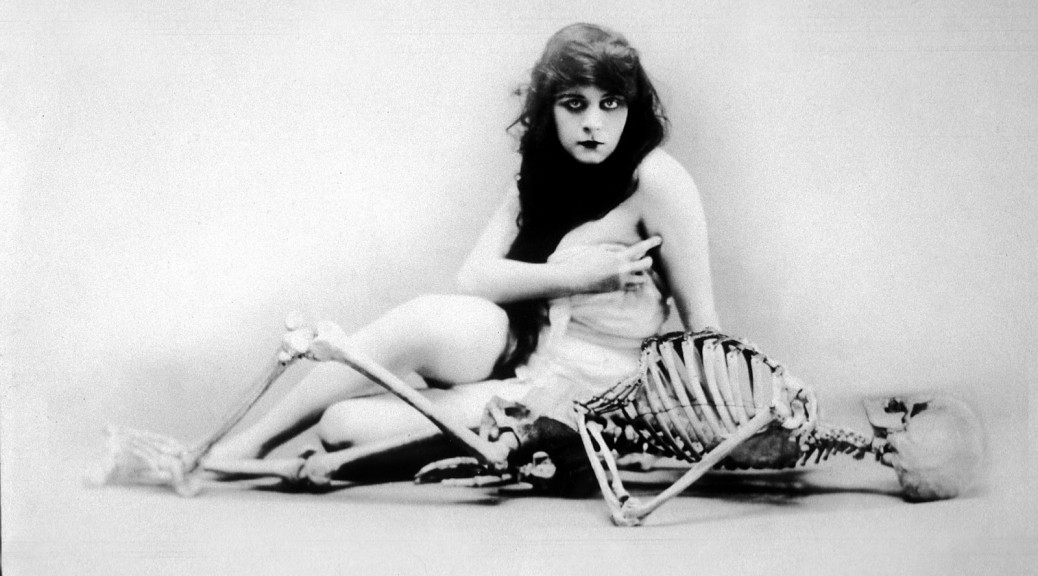 Upon seeing the painting by artist Philip Burne Jones entitled “The Vampire” — first exhibited at the New Gallery in London in 1897 — poet Rudyard Kipling was inspired to write his poem of the same name. A rumination on the vampiric nature of the femme fatale (a term later in vogue in the mid twentieth century), the painting and the poem both depict an unnamed woman who seems to drain all strength and life from an unnamed man.

Much like the female figure’s position of succubus in Burne-Jones’ work, Henri Fuseli’s painting from 1781, “The Nightmare” is an obvious inspiration — one known well to Victorian artists for its otherworldly incubus (or male demon) ravaging a sleeping female victim. But in Burne-Jones work, as in Kipling’s poem, the vampire is female, inverting the standard of predator and prey in a way that had really only been previously done (outside of poetry, perhaps) by Sheridan Le Fanu and his groundbreaking novella “Carmilla” (1871) [a known influence on Bram Stoker’s DRACULA and particularly the excised first chapter, “Dracula’s Guest” which was later published as a short story].

“A fool there was,” begins Kipling, and like lovers in poems before him, the unnamed man falls for “his lady fair.” The narrative voice, however, calls her by another name: “the woman who did not care.” In the end, Kipling writes

Note that Kipling’s vampire never explicitly bares it all — not her nature, her fangs nor, to those later raised on Hammer Horror, her breasts. Kipling’s lyrical tones, almost musical and lighthearted in their cadence, impart the tale of a man drained (“mostly dead”) by a woman who “stripped his.. hide… and threw him aside.” Left to the reader is interpretation: is this a traditional vampire sucking blood? weakening the man sexually? playing on his pride and taking everything he has? (Read the full poem and decide for yourself.)

Fin de siècle art is charged with female empowerment — though it is often limited (because of the societal constructs of the day) to a woman’s ability to leverage sex to great advantage and (perhaps more shocking for the times) establish a persona of strength through sexuality. It is a persona donned with the intention  —  conscious or not —  to simultaneously attract men while repulsing, even threatening them.

The use of the word “vamp” as separate and distinct from “vampire” is American slang and loosely dates to 1909 after Porter Emerson Browne took the Kipling poem and turned it into a stage play entitled “A Fool There Was” (its title taken from the first line oft repeated in Kipling’s poem). Instead of bloodletting, the vampire of the film uses sex, drink and drugs in order to drain her victim.

Later made into a film in 1915, “A Fool There Was” is the story of a woman “of the vampire species” (as an intertitle card reads) who uses her charms to seduce and corrupt a moral Wall Street lawyer.  “Kiss me, my fool” she commands at one point, as if hypnotizing her victim. “You have ruined me, you devil, and now you discard me!” he later laments.

The exchange is bloodless, but nonetheless draining.

As a promotional poster for the film from the period shows, here again we have the woman in a dominant sexual position above the man. Consciously or not, the filmmakers repeat the archetypal image of the inverted sleeping beauty. The promise here is death, not awakening. It is to be a kiss from the blood red mouth of a vampire that the victim receives and not the sweet peck from the non-threatening lips of Prince Charming.

Early on, film producers knew that tapping into established symbols of good and evil paid dividends at the box office, so the Hollywood system responded for decades with starlets that best represented this visual, and visceral, dichotomy that was vamp vs. virgin. For Theda Bara, however, it meant typecasting. Two years later she would play Cleopatra, but for the most part, her career was short-lived.

The vamp, however, survived. Lya de Putti gained notoriety as “The Hungarian Vamp” (appearing in films like D.W. Griffth’s SORROWS OF SATAN (1926).  The Vamp character (or caricature) even graced the cover of a 1925 LIFE magazine in highly stylized, art deco elegance. It was during the nineteen twenties that the word  became synonymous with sexually aggressive women about whom mothers would warn their boys.

Don’t believe that the vamp was taken seriously in the 1920s? Read  “Mothers Complain that Modern Girls ‘Vamp’ Their Sons at Petting Parties” from The New York Times, February 17, 1922.

Sound changed film forever. And so too was the vamp transformed. Marlene Dietrich would bring a different, more androgynous and smoldering sexuality to the screen. Other actresses, like Jean Harlow, would infuse the character with comedy — earning her the nickname “the laughing vamp.”

The second world war saw the rise of film noir, and with it, the stock character of the femme fatale in her more recognizable, modern form. A more complex character than her vampish predecessors — the femme fatale of the forties (and into the fifties) evolved. She became more human, more vulnerable, yet was still a threat to fools unlucky enough to fall victim to her charms. Best embodied by actresses like Ava Gardner in “The Killers” (1946), this femme fatale was far from her vampiric roots, but remained nonetheless dangerous as ever.

A seductress from the moment she is introduced on the screen, Ava Gardner plays Kitty Collins, a moll that mystifies the male lead (“Swede” played by Burt Lancaster), literally and figuratively leading him away from his (not surprisingly blond) girlfriend.

Adapted from a story by Ernest Hemingway, “The Killers” eventually (spoiler) finds Kitty at the center of theft, deception and murder. Ultimately penitent (she attempts a deathbed confession), Gardner’s femme fatale of film noir is no heartless vamp, but what she shares with her forebears is a feminine allure that is irresistible to men. Able to manipulate fools.

By the nineteen sixties and seventies — even well into the eighties — femme fatales were still a fixture of film, but they found expression is a multitude of many and varied characters; from dual-agent (Honor Blackman’s Pussy Galore in “Goldfinger”) to masochist (Isabella Rossellini in “Blue Velvet”) to outright psychotic (Glenn Close in “Fatal Attraction”) and even sympathetic victim (Kim Bassinger in “L.A. Confidential”), the femme fatale of the latter half of the 20th century matured and, with each iteration, seemed to become exceedingly more complex.

And the vamp? A lost caricature of sorts. A leftover whose heavy eyeliner and dark lips are seen more often in Goth subculture than in the movies. No surprise that the progenitors of Goth Rock (including bands like Bauhaus and Siouxsie and the Banshees) were heavily influenced by silent film  — particularly German Expressionism. Siousxie Sioux herself often wore makeup reminiscent of the vamp.

While the role of the temptress is as old as the Bible, the part as played by actresses in Hollywood is only a century old. Is the femme fatale a necessary archetype in western culture? Or is the character outmoded?