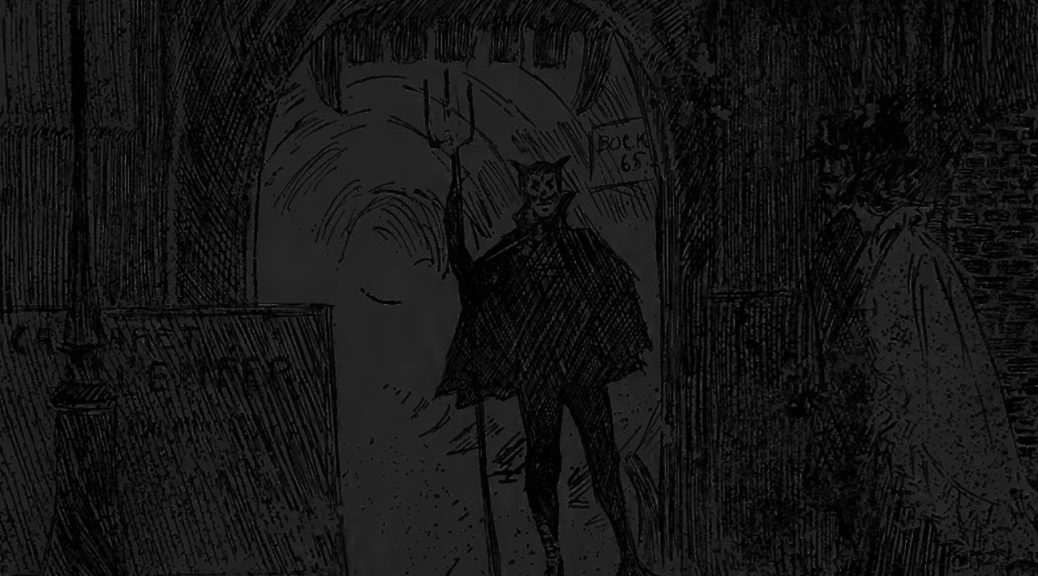 “Having passed through death… we will explore hell,” says Bishop, a friend of artist Edouard Cucuel, to their mutual guest, a Mr. Thompkins in William Chambers Morrow’s 1899 travelogue Bohemian Paris of To-Day.

Leaving the Cabaret du Néant (Nothingness / Death) and about to enter the Cabaret de l’Enfer (Hell) — with its monstrous demon’s mouth of a door — the trio’s evening had long since passed the bizarre, knocking now at the Gates of Hell itself. Or at least a nightclub meant to look like it. Complete with a man at the threshold dressed in red tights and devil’s horns, this was an approximation of hell. A hell on earth, so to speak. And a bit of fun at that.

Such is a scene in one of the last works of little-known American author W.C. Morrow, a colleague of Ambrose Bierce and early-practitioner / respected author of “the Weird tale.” Working from the notes of Edouard Cucuel, Bohemian of Paris of To-Day was an odd departure for Morrow. With the exception of a pamphlet, Roads around Paso Robles (1904), it was the only travelogue he ever produced.

The book is best known for its chapter on Montmarte, particularly sections showcasing the strange and often salacious hotspots of fin de siècle Paris. Possibly the best account we have of the notorious Cabaret du Néant and Cabaret de l’Enfer — both of which appear to have operated at least through the early 1920s (with the buildings still standing as late as the 1950s) — Morrow’s transcription of Cucuel’s notes provides details that photos (which abound on the web) never could.

The Cabaret du Néant, for example, was funereal and thick with the trappings of death — a place where tourists dined off of coffins and were served by undertakers. It was a nightclub that catered to the thrill-seeking tourist who wanted more than the dancing girls of the Moulin Rouge. Its main attraction? An illusion on stage of an attractive girl in an upright coffin. Before the crowd’s eyes, she transformed into a skeleton. A trick with mirrors, most likely.* 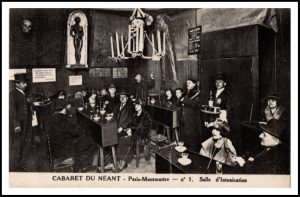 “Enter and be damned,—the Evil One awaits you!” were the words that welcomed the visitor at the next stop along the way.; at the gaping mouth of the Cabaret de l’Enfer, Mephisto himself greeted you. There, at eerily lit red tables, imps served black coffee with cognac, calling it “seething bumpers of molten sins, with a dash of brimstone intensifier.”

The nearby heavenly Cabaret du Ciel completed the trio. It was arguably the most boring of the clubs — the kind Oscar Wilde would have skipped.

Overall, they were clubs any modern-day Goth would love to be caught dead in. Some might call it bad taste. Others, campy fun.

The travelogue is interesting, but it is also telling. Why did such places interest not only tourists and Parisians alike, but artists like Cucuel and the writer who transcribed his notes, W.C. Morrow?

Morrow — a displaced southerner who became a San Franciscan of some fame whose short stories reminded many a critic of the work of Morrow’s friend, Ambrose Bierce — wrote many a serious horror tale. His most famous collection, The Ape, The Idiot and Other People (1896) had established him among known “weird tale” writers of his day. A mere three years later, he had apparently abandoned the short story (for he would publish no other collection) and was here transcribing the notes of an artist wandering about Paris. It makes Bohemian Paris of To-Day stand out as such an odd departure for Morrow — especially considering the subject matter of his most famous work.

“His Unconquerable Enemy” (first published in 1889 and later collected in the aforementioned volume) is unquestionably the best story written by Morrow. And it most certainly belongs to the class of horror fiction often called conte cruel. As opposed to the supernatural weird tale, the conte cruel concerned itself with the horrible in human nature in a world where death by violence seems almost inevitable. In the tale, a western doctor tells the tale of Neranya, a temperamental servant of the Rajah with a penchant for violence who is punished for his frequent offenses by being systematically dismembered with each passing transgression. Finding himself in a personal hell by the end of the story — as nothing more than mere head and torso in a cage — Neranya pulls off one final (if implausible) act of revenge that ends in his falling upon the Rajah and killing him. It is a vicious act in a tale completely devoid of the supernatural, and it belongs to a class of short-story called the conte cruel.

INFLUENCE OF THE CONTE CRUEL

In his seminal study Supernatural Horror in Literature (1927) , H. P. Lovecraft observed that “[the Conte Cruel]… is less a part of the weird tradition than a class peculiar to itself… in which the wrenching of the emotions is accomplished through dramatic tantalizations, frustrations, and gruesome physical horrors.”

So how did a writer of such violent and disturbing fiction come to transcribe the travels of an artist through the equivalent of themed restaurants that were the nineteenth-century equivalent of Disney’s Haunted Mansion?

The words of horror master Clive Barker — quoted by Rob Lowman of the Los Angeles Daily News regarding Barker’s “Freakz” live show at Universal Studios in the late 1980s — may provide an answer. For Barker, author of The Books of Blood (1984-1985) and director of Hellraiser (1987), putting together the equivalent of a Halloween Haunted House may seem like a step down. But it may be better seen as a step sideways — from one kind of scare to another.

“There’s something deeply perverse about this,” says Barker of his live show. “If something like this happened to us in real life… we’d reject it wholesale. But if it’s a safe environment, like a movie or a ride or a book then we can put [it] down.”

Or simply leave, like we would a nightclub where skeletons appear on stage and the devil serve us drinks.

Barker continues: “what it is, is a confrontation with death in a very safe environment. If we walk away from the play environment having confronted death… then maybe we are stronger when we confront it in the real world. We all need to do this. We’re all going to die. The years tick on and you get closer to the end, and that’s part of the dynamic of being alive. Knowing we’re on that journey.”

Taking Barker a step further, perhaps a trip to hell helps us explore the dynamic of being damned. If only for an evening.

Morrow shares that journey with us — via both the tourist traps of turn-of-the-century Paris and the gruesome horrors of the conte cruel; as radically different as these writings are, they resonate with Barker’s keen observation that “If we walk away from the play environment having confronted death… then maybe we are stronger when we confront it in the real world.”

Perhaps the camp of the cabarets and the carnage of the contes cruels are not all that incompatible.

Perhaps Morrow saw this too.

Note: links below may be displaying improperly; this may be the result of an upgrade to WordPress 4.5.2. If links are not showing as “hot” please copy and paste any URLs of interest into your browser.

For more information about little-known horror authors of the late nineteenth and early twentieth centuries, read S.T. Joshi’s seminal The Evolution of the the Weird Tale. In fact, get it on amazon.com (http://www NULL.amazon NULL.com/Evolution-Weird-Tale-S-Joshi/dp/0974878928) along with my book (http://www NULL.amazon NULL.com/Little-Knives-Twelve-Horror-Supernatural/dp/0595319653)! 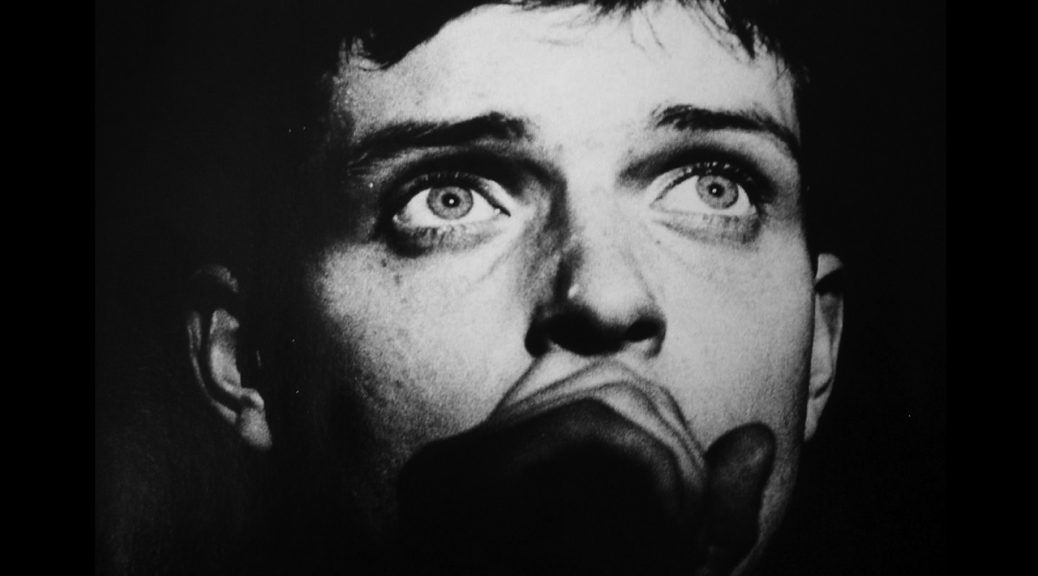 On the fortieth anniversary of the death of Ian Curtis (15 July 1956 – 18 May 1980) [this blog post has been edited to mark the occassion in 2020], the inevitable articles will be written and social media posts will abound honoring the memory of Joy Division’s lead singer and lyricist. Many will romanticize Curtis’ suicide, misunderstanding the real contribution Curtis made to culture and modern music. Most will simply mourn the life of a talented frontman and artist that helped usher in what is now known as post-punk or proto-goth.

Joy Division were formed in 1976 in Manchester, England. They began as a punk band inspired by The Sex Pistols, but through an evolution of  dogged determination to transcend punk and a desire (actualized by producer Martin Hannett) to experiment with sound, grew to become a band unlike any previously heard in the history of popular music.

In the end, Joy Division produced only a handful of singles (most notably “Transmission” and “Love Will Tear Us Apart” (https://www NULL.youtube NULL.com/watch?v=zuuObGsB0No)), and two official studio albums: the groundbreaking Unknown Pleasures (June, 1979) and the hypnotic Closer (released July, 1980 [after Curtis’ death]).

Although a number of compilations were produced in the wake of Curtis’ death, it is the two seminal albums and the aforementioned singles that would secure the band — consisting of Curtis, guitarist and keyboardist Bernard Sumner, bassist Peter Hook, and drummer Stephen Morris — their place in music history.

Part of a movement that would include acts like The Cure, Echo and the Bunnymen, The Fall and Siouxsie and the Banshees, Joy Divsion helped usher in a new age of popular music. The band that would rise from its ashes as New Order —with Sumner, Hook and Morris surviving — would go on to produce the 1980s dance hit “Blue Monday” along with alternative / college radio hits like “The Perfect Kiss” and “Regret.” Their longevity lasted well into 1990s with disbandment and reunions pretty much up to the present-day.

The influence of the Joy Division sound on New Order was short-lived. After recording material begun with Curtis and finished without him (the formidable single “Ceremony” with its haunting b-side “In a Lonely Place”) , New Order would turn to up-tempo electronica.

With the exception of tribute concerts by Peter Hook and occasional live performances of Joy Division songs performed by New Order and sung by Bernard Sumner over the past decade, New Order and its members clearly distanced themselves from the specter of Joy Division, especially in the early days (understandably, as the loss of Curtis profoundly affected his bandmates).

Other artists, however, so admired Curtis that they would go on to record songs alluding to him — U2’s 1980 “A Day Without Me” (https://www NULL.youtube NULL.com/watch?v=LyxZstXOuuU) most notable among contemporaries. U2 had worked with Joy Division producer Martin Hannett on Boy and been given a tour of the studio when Joy Division was recording “Love Will Tear Us Apart.” Bono was so enamored with Curtis that he would go on to tell Tony Wilson (founder of Factory Records, Joy Division’s label) that he thought Curtis was the best vocalist of his generation.

A number of artists have covered Joy Division songs over the years. “Love Will Tear Us Apart” alone has been covered numerous times (http://www NULL.vh1 NULL.com/news/17541/top-10-joy-division-covers/) (although not by David Bowie as once incorrectly reported). Moby, long a Joy Division devotee, recorded “New Dawn Fades” for the soundtrack to the 1995 DeNiro / Pacino movie Heat.  The Killers covered “Shadowplay” in 2007 (https://www NULL.youtube NULL.com/watch?v=wrbKvxGgFfg). The list goes on.

Joy Division songs have even found their way into more recent pop culture. Britain’s “East Enders” television drama continually used an uncredited version of “Love Will Tear Us Apart” throughout the series (2010, 2011…); NME would go on in 2012 to name it the #1 song of the last 60 years (http://www NULL.nme NULL.com/news/joy-division/64455). Then there’s the recent Lady Gaga vehicle “American Horror Story: Hotel” (2015-2016) which featured both “The Eternal” from Closer and New Order’s aforementioned “In a Lonely Place.”

And then there are the truly bizarre inheritors of the spirit of Ian Curtis: those that go beyond standard rock and roll arrangements and introduce sounds that Curtis himself (a fan of so many genres, including Reggae) would have at the very least found interesting. Yann Tambour, from Stranded Horse,  a Frenchman who has been making his own versions of koras — the 21-string West African lute-bridge-harps, for years — covers “Transmission” in what has to be the most “out there” interpretation of a Joy Division song ever.

36 years on, and Joy Division is still inspiring experimentation.