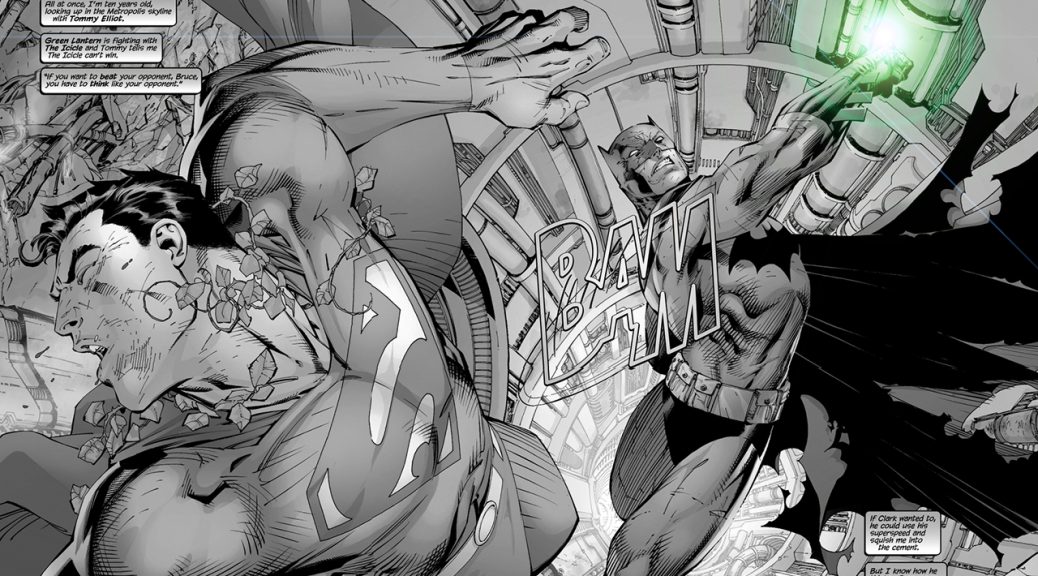 With the the recently released extended version of Batman vs. Superman: Dawn of Justice, a hotly contested debate will undoubtedly continue — not only involving the merits of this almost universally panned production but also the believability of Batman truly being able to take on Superman.

It’s an age-old question. Brains vs. brawn. Or is it?

The idea that Batman and Superman could be such bitter rivals was introduced in the modern age, courtesy of Frank Miller and his groundbreaking Dark Knight Returns. There, Superman is a tool of the government, sent to put down the once retired now revitalized thorn-in-the-side of the powers that be. It’s a comic book world born of the cynical nineteen eighties and a time when superhero fiction was at a critical crossroads of cultural legitimacy.

Using his advantage of time and “considerable fortune,” Batman of TDKR develops armor and an arsenal of weapons — including a synthesized form of the mcguffin known as kryptonite — to make the Man of Steel bleed. It’s a short-lived battle, but it makes its point. Superman is not invulnerable. But what is  the true nature of his vulnerability?

In the Golden Age of comics, DC’s finest heroes were the best of friends. Having officially first met (outside of the Justice League) in Superman #76 (1952), there was friction between the two, but it was over harmless flirtations with Lois Lane. Like the Golden Age itself, there was innocence. Comics were for kids and kids at heart.

Throughout the Silver Age, the relationship between Batman and Superman became almost comical with “The World’s Finest” team swapping everything from villains to powers, finding Batman get superpowers of his own or (stranger still) get taken over by an alien just to keep up with Superman. Mercifully, the “World’s Finest” comic was finally canceled in the mid eighties as the plots became more and more peculiar. just in time for Miller’s alternate history / future, and John Byrne’s seminal Man of Steel mini-series reboot — both in 1986.

It was in issue three of the latter series that we get the first hint of distrust between the two characters in the mainstream (rebooted) DC universe. Superman makes it clear to Batman that he could whisk the caped crusader to a cell in the blink of an eye when Batman retorts that were Superman to touch him, a (magnetic?) field surrounding his body would trigger a bomb somewhere in Gotham, killing an innocent person. It’s the first tense moment between the two in regular continuity. Of course, Batman doesn’t tell the Man of Steel on whom the bomb is planted: it is Batman himself!

Batman’s machinations reveal, to no one’s surprise, a dark side to the hero — one that would be crystalized almost two decades later by Jeph Loeb in his critically acclaimed HUSH storyline:

“If Clark wanted to, he could use his super speed and squish me into the cement. But I know how he thinks. Even more than the Kryptonite, he’s got one big weakness. Deep down, Clark’s essentially a good person… and deep down, I’m not.” — Batman: HUSH #612 (2003)

“Deep down, I’m not [a good person.” Batman’s awareness of self is at the same time sad and empowering. As such, it begs a number of questions.

Wherein lies true power? And what is more heroic? Having the willingness to do whatever it takes? Possessing the restraint that keeps one from abusing power? Knowing one’s true self? Or is it something more sinister.

The lines between the heroes begin to blur. Just as each once stood for the innocence of caped abandon (in a Golden Age that still exists for every child on a playground), each hero also faces the moral consequences of action and inaction. Historically (at least in the comics), Superman has maintained that core of innocence and desire to forever be the “good” man raised by his adoptive parents. Conversely, Batman has been the morally grey divided self striving to do good in a world where he learned early on from the brutal murder of his parents one thing: that the world is essentially a bad place.

Does that ultimately drive Batman to madness? Writers of both the comics and pop culture commentaries have certainly questioned his state of mind (see, for example What’s the Matter with Batman?). Does Bruce Wayne fit the schizoid personality profile defined in Dr. R. Laing’s seminal,  existential nineteen-sixties study The Divided Self? The problem with such attempts to analyze Batman is that it assumes Batman does not nor can ever rise above his childhood trauma. Superman, on the other hand, grows up with love, support and a strong moral compass. Does love, then, as poets and preachers would have us believe, conquer all?

Director Zack Snyder hints at, but ultimately abandons this dichotomy of underlying philosophies and mental health in favor of making both characters world-weary and guilt-ridden. When we debate the murkiness of character(s) evident in Zack Snyder’s ambitious but ultimately flawed film, the issue of what it means to be a hero and whether or not the better man wins may come down to more than the result of the film’s titular main event (it certainly comes down to more than [spoiler alert!] the invocation of the name Martha!!!!!). It comes down to which man is more (or less) damaged. And that does a disservice to both characters.

In the end, it just may be that the “dawn of justice” is the moment when it’s made clear that all heroes have flaws. That moral absolutes are tough to come by in this day and age. And that, for our heroes to resonate at all with a modern audience, they have to be as conflicted as we are.