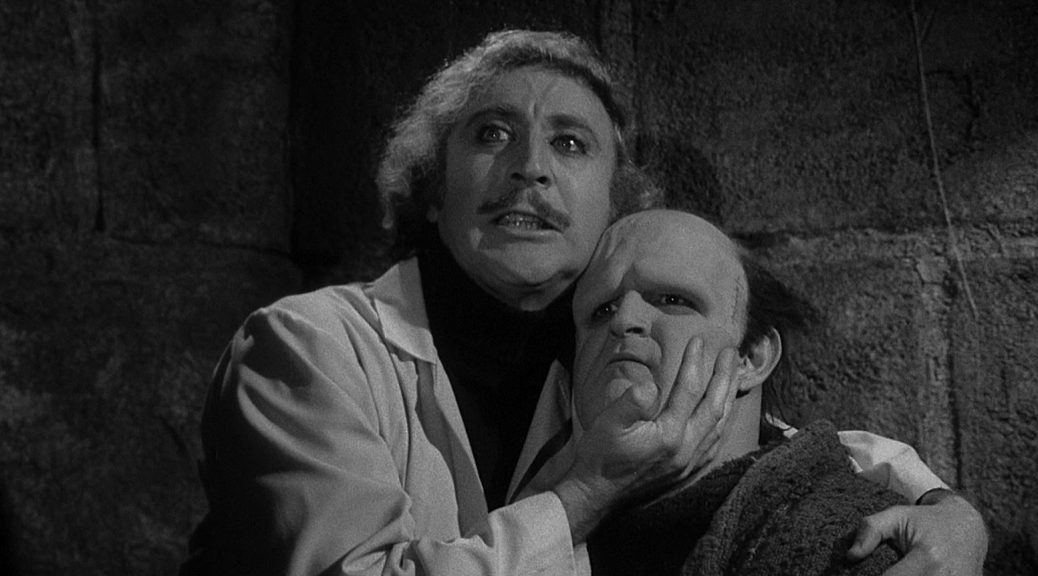 With the passing of Gene Wilder — one of the best actors to ever to play Dr. “Fronkensteen” — Mary Shelley’s monster may never be funny again. Not that the young girl — a few months shy of her eighteenth birthday — wrote the tale of a man who created a monster  for laughs. On that stormy night two-hundred years ago when she was challenged by Lord Byron to pen a horror tale, comedy was probably the furthest thing from her mind.  Her Frankenstein: The Modern Prometheus, the now classic novel first published in 1818., is arguably humorless. Shelley’s novel is one of tragedy after tragedy. At its conclusion, Frankenstein’s fiancé has been strangled by the monster, Victor himself dies (of exposure, exhaustion, ambition!) and the monster, who weeps for his maker, is last seen floating away on an ice flow. Not funny at all. Ironic in places, perhaps. Histrionic, which can be funny in a “people just don’t act like that” sort of way.  But it’s not until Mel Brooks and Gene Wilder 1974’s Young Frankenstein that the story becomes pure comedy for the sake of the comedic. Or was it?

The first adaptation of Mary Shelley’s novel to stage, Richard Brinkley Peake’s 1823 Presumption! or, The Fate of Frankenstein — produced not five years after the first edition of Frankenstein (and arguably a reason why the novel went to  a second) — was the first to mute the creature, and in so doing, open the figure more easily to ridicule. The monster of the novel is well- read, well-spoken and almost erudite, but Peake’s creature is clumsy. And Peake doesn’t stop at stumbling pantomime. Within the play there is a ignoramus of a servant named Fritz (curiously, the name given to Frankenstein’s assistant in Universal’s 1931 classic with Boris Karloff) and his only slightly more intelligent wife; they sing lighthearted songs and are peppered as comic relief throughout the play. It’s as if Peake saw Shelley’s story as only working on stage if there were an infusion of levity. Melodrama only plays so far with an audience. And gothic melodrama? It was panned by the critics.

So why not go in the “other” direction? More to the comedic and an attempt to appeal to even wider audiences, Peake put together a version later in 1823 that was outright farce: calling it Another Piece of Presumption. Then the imitators started: there was Frank-in-Steam; or, The Modern Promise to Pay; a monster played by a dwarf in a burlesque version of the play; and then, perhaps the most over-the-top of adaptations from the time: Frankenstitch (the Needle Prometheus), about a tailor who sewed together pieces of several bodies to make his creation. Each was further removed from the source material. And while most were torn apart by critics looking for more by way of the ethical questions inherent to the subject of man creating man, audiences apparently loved the humor. Stage adaptations continued through the nineteenth century, from gothic melodramas to Richard Butler and Henry Chance Newton’s musical burlesque: Frankenstein; or, The Vampires Victim (1887), a flop that found the monster flirting with his feminine side. It ran only one week.

Why would audiences want a comedic Frankenstein?

Fast forward a little over 20 years and the moving picture would pick up the tale of the man who created a monster by none other than inventor Thomas Edison. His once “lost” 1910 adaptation of Frankenstein actually ends comedically — at least in the Aristotelian sense of the term. The monster, a hideous mirror-image of Frankenstein (literally) is a jealous type, not happy with his maker’s attention to a woman. But in the end, love conquers all and the monster’s image dissolves into the mirror. Frankenstein and his bride live happily ever after.

In practically every adaptation since, the monster’s luck with women never much improved. Similarly jealous of his maker’s bride, Boris Karloff’s quintessential creature in James Whale’s 1931 Universal classic ends up feared and hunted.  But Dr. Henry Frankenstein (played to over-the-top 1930s perfection by Colin Clive) ultimately ends up in the arms of his beloved Elizabeth by movie’s end. The monster? Consumed in a fiery mill and presumed dead. Once again, all is right with the world. What seemed doomed to tragedy ends well.

Then Director James Whale makes one of the boldest moves in Hollywood history by turning the genre upside down with his sequel.

James Whale’s brilliant Bride of Frankenstein (1935) is a subversive film. Beyond the solid argument made by Gary Morris is his essay for the Bright Lights Film Journal, Bride of Frankenstein not only  addresses sexual subversion and a challenge to traditional family values, it forces the audience to confront the notion that the most freakish among us may be the most human, and those in positions of power — the scientists and burgomasters — haven’t a clue.

There is humor in the subversion. From the pure camp of Doctor Pretorius to the played-for-laughs startles and screams of Frankenstein’s housekeeper Minnie, the audience has much to smile about in Bride of Frankenstein. And all the while, their expectations of what a horror movie should be — how it should end (i.e., resolve favorably) and that morality, normalcy and the nuclear family should escape unscathed — is subverted. No marriage here. “We belong dead,” says the monster as he pulls the switch to blow the set to smithereens. Roll credits.

Sharing more with Whale’s sequel than simply being a parody of the genre, Mel Brooks takes subversion one step further (or perhaps back) in Young Frankenstein. Those who would normally hold positions of power, the scientist and inspector, are here subjects of ridicule — and both we and THEY know it.

Wilder, in particular, revels in his character’s inability to comprehend the significance of what he has done and what he is doing. He is narcissistic and anxiety-ridden, nervous about his future and embarrassed as to his family’s past. But expose him to the temptations of his libidinous assistant Inga, the multiple machinations of his housekeeper Frau Blücher and the sheer insanity of his sidekick Igor (it’s pronounced “Eye-Gor”) and suddenly Dr. Frankenstein reclaims not only his heritage, but his passion for living. Ironic that this is found only through the resuscitation of the dead. Through the making of a child-like (yet well endowed) monster, Frankenstein becomes more human. Each laugh endears us more to both him and his creation. And the subversion? Whereas Whale’s Bride of Frankenstein subverts sexual mores and challenges the nuclear family, Young Frankenstein is simply, subtly (yet superbly) a subversion of audience expectation. We know the tropes of the genre: the dark and stormy night (“could be worse”…”could be raining”); wolves baying at the moon (“there wolf… there castle”); secret passages (“put..the candle…back).

Yet Brooks and company subvert our expectations from the smallest of punchlines to the biggest of payoffs — a truly happy ending.

In place of Shelley’s questions about the nature of man and the ethics of scientific inquiry, Brooks explores not what it is to be a man who makes a monster, but what it means to be someone or something so outside the norm that it is, ultimately, freed from norms. Free to be happy. Free not only to be how one was made but who one is capable of becoming.

It’s a message for all freaks and weirdos.

And yes, the doctor still ends up with a bride.

But even the monster gets the girl.