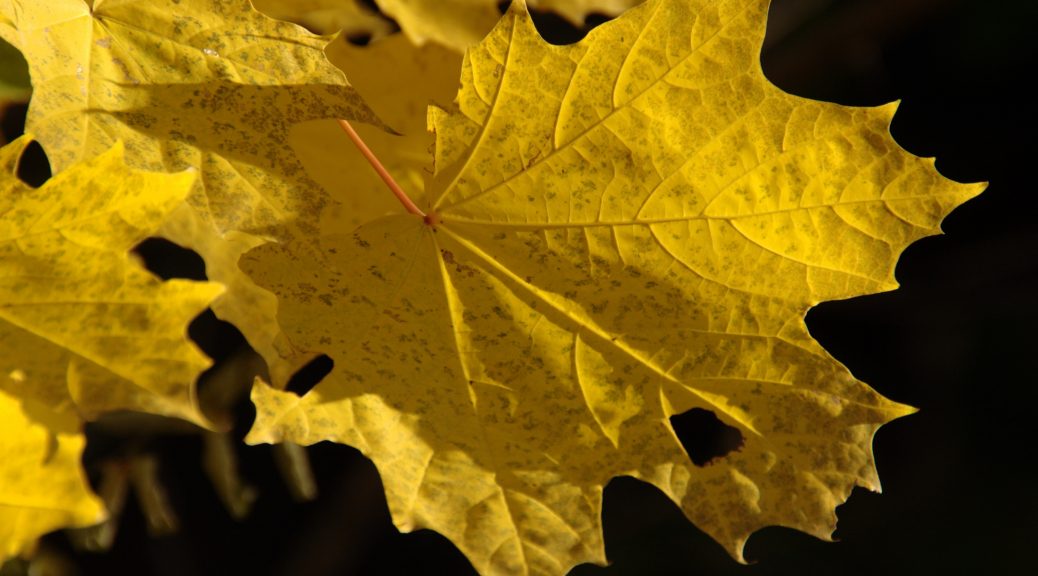 No one really knows where the word autumn comes from. Some say it can be traced to the ancient Etruscan root “autu” — meaning the passing of the year or the drying season — but there aren’t many ancient Etruscans around to confirm that.

Chaucer may have been the first (Middle) English author to use “autumn.” In his translation of Boethius’ Consolation of Philosophy (c. 1380), the Latin “autumnus” morphs into Old-French “autumpne” in a line about Boreas, the Greek God of the North Wind. Boreas is said to be blowing out leaves that Zephyrus (the West Wind) had blown in during the Spring.

A few years later (c. 1400), John Trevisa, a Cornish writer, in his translation of Bartholomew de Grenville (there will be a quiz) uses autumnus as an equivalent to “harvest.” The word “harvest” (from Old Norse “haust”) had been used for centuries to refer to that time of year after summer and before winter when, well, as the term would suggest, the crops got harvested.

“Harvest” would seem to be the oldest reference to the season. Translations of the Bible from as early as 382 A.D. (St. Jerome’s work that led to the Latin Vulgate) use the word “messueritis” (reap) which comes from “messis” (harvest). But somewhere along the way between the fourth century and the fourteenth, someone took a really old Italian / Etruscan word (from before the time of Christ) and merged its meaning with a relatively old Italian / Roman term. Then Chaucer came along and officially used the word that would only really be legitimized in the late sixteenth century.

The common man, however, seems to have liked the more simple, straight-forward terms for the season:  FALL. Indeed, the use of fall to denote the season after summer appears to have been more widely in use during the Middle Ages. It comes from the Old English fiæll or Old Norse feallan — both meaning literally to fall.

“Fall of the leaf” —popular through to the mid-sixteenth century —was the English phrase that got shortened to “fall” and served as a complement to its opposite “spring.” Makes sense. Right? Sense enough to one of Shakespeare’s contemporaries, Sir Walter Raleigh, who referred to the season as such in his Nymph’s Reply to the Shepherd (1596). Though, to be fair, it looks like Raleigh just needed the rhyme:

The flowers do fade, and wanton fields
To wayward winter reckoning yields;
A honey tongue, a heart of gall,
Is fancy’s spring, but sorrow’s fall.

As for Shakespeare, writing at about the same time, it looks like he preferred “autumn.”

According to at least one online concordance of Shakespeare, the Bard used the word “autumn” a total of 7 times in 9 speeches in 8 works. It is in Midsummer Night’s Dream (c. 1595) when Titania, queen of the fairies, refers to the cycle of the year as “The spring, the summer, the childing autumn [and] angry winter.” Then, in 1609, Shakespeare goes on to use the word in Sonnets 97 and 104 (as well as imagery of the season in Sonnet 73). It could even be argued that the latter is the first unequivocal association of autumn with darkness, old age, twilight, death and dying.

That time of year thou may’st in me behold
When yellow leaves, or none, or few, do hang
Upon those boughs which shake against the cold.
Bare ruin’d choirs, where late the sweet birds sang.
In me thou see’st the twilight of such day,
As after sunset fadeth in the west,
Which by-and-by black night doth take away,
Death’s second self, that seals up all in rest.

“Autumn” would go on to become a useful metaphor for many poets.  John Donne has an Elegy that’s entitled “Autumnall.”  Among Americans of the same period, Puritan Anne Bradstreet (1612-1672) wrote a poem simply entitled “Autumn.”

But its among the British that autumn really takes hold — in or around the middle of the eighteenth century. Scottish author James Thomson would publish a cycle of seasonal poems — including Autumn in 1730 — that were so influential that Johnson’s dictionary (1755) almost exclusively refers to the season as such (citing Thomson). Later, into the late 18th and early 19th centuries, Romantics William Blake and John Keats would get in on the odes-to-autumn-action. As for Emily Bronte, she can’t seem to make up her mind to commit to one or the other.  But who can blame her? By the middle of nineteenth century, the use of one term over the other got downright confusing.

Some would say the dividing line is definitely one of geography — with the British preferring autumn while Americans use fall. Indeed, lexicographer John Pickering, writing in his  A Vocabulary, or Collection of Words Which Have Been Supposed to Be Peculiar to the United States of America (1816) noted that “A friend has pointed out to me the following remark on this word [autumn]: ‘In North America the season in which this [the fall of the leaf] takes place, derives its name from that circumstance, and instead of autumn is universally called the fall.'”

A matter of circumstance? More a matter of taste. English is funny that way.  Certainly into the twentieth century, American poets seem to have settled on using “fall.”  In works like Robert Frost’s October, Robert Lowell’s Skunk Hour, and Richard Wilbur’s The Beautiful Changes, fall comes into is literary own.

Poetry is just one barometer we have for determining which name was more popular in any given century. There are almanacs, letters and the aforementioned dictionary. What’s in a name? Certainly, fall and autumn each carry similar connotations. One is not necessarily better than another.

At the end of the day, one season can certainly have two names. I for one propose we call winter “hoar”; spring “the greening”; and summer “mosquito-time.”