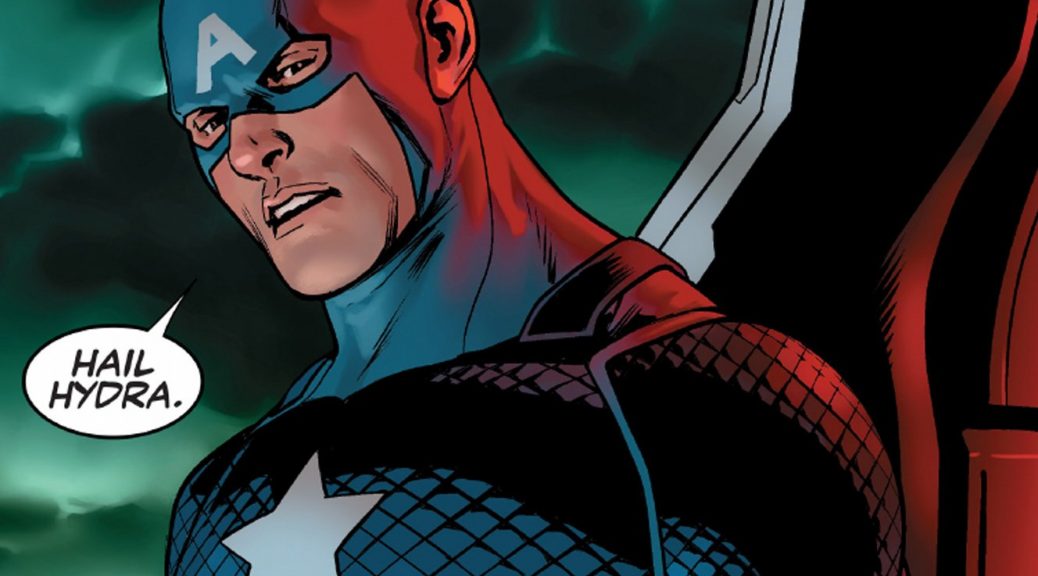 Unless you’ve been living under a rock or have absolutely no interest in comic books (the latter being more likely), I hate to break it to you, but Captain America is now and has always been an agent of Hydra, the ancient evil organization once tied to the Nazis that he has otherwise fought against for the last fifty of his seventy-five-plus-year history.

In interviews, writer (and one-time politician) Nick Spencer — who has become much reviled in the comics community over the past year— has made it clear from the very beginning (Steve Rogers: Captain America #1 (May, 2016)) that comics’ most patriotic hero has not been brainwashed nor is he a doppleganger dispatched by some villain to disrupt the status quo. No, this Captain America is, was, and always has been a member of Hydra. And while the plot may be somewhat complicated (essentially, a sentient Cosmic Cube altered history), the end result is the same: Captain America — while still an idealist — is now a fascist, and the world of Marvel Comics is now victim of his burgeoning secret empire (begun with a book of the same name which debuted in April of 2017).

Over the past year, newspapers and magazines around the world have grappled with the implications of a villainous Cap, while fanboys and average citizens alike have made it known that messing with such an America icon would most certainly have Cap’s creators Joe Simon and Jack Kirby rolling over in their graves.

Cap’s still the same guy that fought the second World War, was thawed from ice in the sixties and eventually become leader of the Avengers, only to take a bullet and die a martyr after Marvel’s first Civil War (of course, no one in comics stays dead). It’s just that writer Nicker Spencer has cast doubt over Cap’s motivations the entire time he was a “hero.”

In the now altered history, Cap became America’s sentinel of liberty with the support of Hydra. Since being thawed from the ice decades ago, he’s had a secret agenda in mind: to gain the trust of the nation — the world even — so that one day his machinations would put him in control of everything from an alien defense shield that encircles the planet to the military / police force that is S.H.I.E.L.D. (think Marvel’s global equivalent to the C.I.A.). What motivates this scheming Captain America? Service to Hydra, and world domination under his leadership. In that regard, Cap believes himself to be a savior of sorts — a man of singular vision who will rule fairly, but with an iron fist. World leaders and superheroes have failed society, this Steve Rogers believes, and humankind will benefit from the order and direction he and his version of Hydra will bring.

Some have said that Spencer has tapped into the cultural zeitgeist of right-wing politics and populism that has risen of late in the western world. That said, the first issue of the series debuted in May of 2016, long before Trump was elected president, Britain planned to leave the European Union and elections throughout Europe became the platforms for debate about nationalism, safety, and the rule of law.

Is this new Captain America a symbol for such movements? Curiously, the right has rejected a fascist Cap, seeing in him the worst of liberal attempts to tear down patriotism and demonize law and order. The left, too, responds with rancor as a symbol to them of a more tolerant democratic ideal has been corrupted.

The issue raises questions of a fictional character’s nature and how he or she can become different things to different people at different points in history. Aesthetic identity — insofar as a fictional character can be said to have an identity (which makes for sticky metaphysics) — can support the argument that there can be an alignment of the cultural and the artistic to a point where art (even comic art!) can become “ours” or “theirs” — positioning an icon like Captain America as being in the service of special interests at any given point in time.

Time. It’s essential to the discussion of a fictional character with longevity. In the hands of different writers and artists over time, does a fictional character need to have a persistent identity over that stretch of time to continue being that character? To theorists, this state of being is called endurantism — where an individual is wholly present at every moment of its existence. Or can that character  have distinct temporal parts to its existence — called pedurantism — and thus not be tied to continuity of existence?

Some philosophers would raise the “Ship of Theseus” debate at this point. And while that might take us far afield, give me a paragraph to explain. It goes like this: if a ship exists in one form at one time and is then taken apart plank by plank and re-assembled at a later time with pieces re-arranged for revised purpose, is it the same ship anymore? The general principle could be applied to this fascist Captain America. Remember, he’s not brainwashed nor is he a doppleganger. He is still Steve Rogers. More so, he has always been Steve Rogers AND a child raised and heavily influenced by Hydra. While in the hands of the Allies in the second world war, the Cosmic Cube once masked the true nature of Cap as a servant of Hydra. He was made to be a hero in what ironically turned out to be the actual alternate reality. When the cosmic cube revealed Steve Rogers’ “true” nature as an agent of Hydra all along, it was actually returning reality to how it should have been (the original Ship of Theseus). Was the re-assembled ship also Steve Rogers? To those adhering to pedurance theory, the answer is yes. His identity is tied to distinct temporal parts throughout the character’s existence. It can therefore be said that while Hydra Cap is the same (fictional) person, his identity is dependent on the Cap that he is at any given point in time. Identity is not fixed.

To a lesser extent, we’ve seen iconic characters change radically before at distinct temporal points. Sherlock Holmes has been a twenty-something genius in the nineteenth century, a middle-aged cocaine addict in the twentieth, and an unkempt eccentric of indeterminate age in the twenty-first. Batman has been both a level-headed and lauded superhero with a clear sense of justice, but also a reviled vigilante with possible mental illness.

In the end, who is Steve Rogers? In and of itself, that question presupposes that there is an end (and a single Steve Rogers). For characters like Cap who have been developed and modified over time by countless writers and artists, there will never be an end. Only slices of time in which that character exists. To complicate the matter, one could argue that every comic one reads, regardless of when it was written, is happening as it is read. Fixed points in time all happen at once to the mind.

Of course, Captain America as agent of Hydra could be nothing more than a marketing ploy — a none-too-clever way to sell more comic books. The alternative, however, has more than risk for the company of possible stagnant sales. It has the permanence that a character can never change — or perhaps more important, be challenged with change (even for the worse) and find their way back to redemption.

After Secret Empire comes to an end, let’s hope that the cosmic cube which started this whole mess doesn’t simply alter reality once again *, for it would be interesting to see one of America’s most enduring symbols find his way out of the darkness to do what heroes do best — fight against injustice regardless of cultural tides. To exist as different beings over time but retain their heroic traits no matter how misguided they may be. To transcend aesthetic identity and approach what every creator hopes for a character: a life beyond the pages.

Yes, Steve Rogers is fictional. And yes, we’re talking about comic books. But we’re also addressing core beliefs that human beings are capable of significant change over time, and that character is a trait as well as a fiction.

And to the architect of this tale, Nick Spencer, a special message: we’re counting on you to define who Captain America is, was and will be for generations to come.

August 26, 2017: Oh well. SPOILER. Deus Ex Machina. Kobik, the sentient cosmic cube, restored the status quo. The “real” Steve Rogers returns, and in a punch-up all too typical for comics, beats the crap out of Fascist Cap. What remains to be seen in Marvel’s “Legacy” is if this returned Captain America can regain the trust of the nation.

If only real life could be this simple.