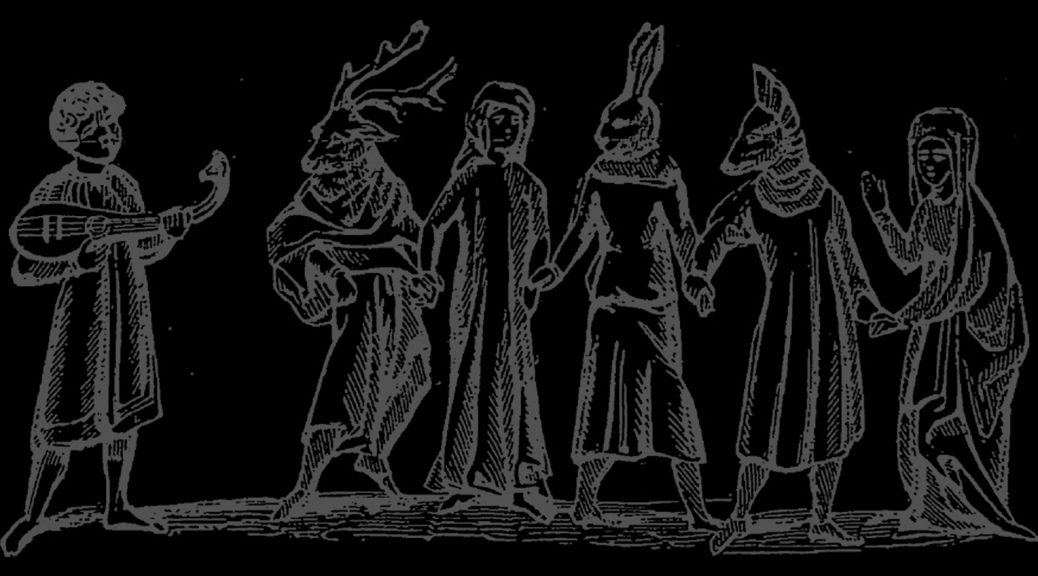 From 14th century Europe to 21st century Philadelphia, mummers have long been associated with colorful costumes, fun and frolic, music, and merrymaking. Their history, however, has not always been one of light-hearted holiday entertainment. Violence. Murder. Mayhem. As much as they are celebrated, many a mummer has been feared over the last 700 years.

When exactly the tradition of dressing up in costumes and traveling house to house to bother the neighbors began, no one is quite sure. They can at least be traced back to the end of the thirteenth century when Edward I (aka Edward Longshanks) held a wedding for his daughter at Christmas that included mummers. And a 14th century manuscript clearly shows such revelers in costume.

The name itself finds its origins in the Old French “momeur” — from momer which can be translated as “to act in a mime.”

Performing “mummer’s plays” at Christmas (or Plough Monday, which came a bit later in January), mummers  — or guisers as they were sometimes called (for the disguises they wore) — would usually engage in mock combat, parading about in animal masks. The practice was popular enough of a tradition to spread beyond the British Isles to other English-speaking parts of the globe — including the new world, as far north as Newfoundland, and as far south as St. Kitts and Nevis in the Caribbean. Newfoundland, especially, had a rich tradition of mummery, brought by Norweigians and Swedes across the Atlantic in the early nineteenth century.

Over the years, characters like Father Christmas (who may have come into English tradition because of mummers), dragons, and the Devil began to take center stage in mummer’s plays — all performed in good fun. One mummer’s verse captures well their intentions.

“Here we stand before your door,
As we stood the year before;
Give us whisky, give us gin,
Open the door and let us in.”

As years pass, mummers as colorful quasi-minstrels and oft-drunken merrymakers became part of British Christmas tradition. But by the middle of  the 19th century, they begin to be thought of as more of a nuisance. And in one particular case, as murderers.

The alleged murder of a fisherman named Isaac Mercer by a group of men disguised as mummers in 1860 is one of the most notorious crimes in Newfoundland history. So heinous was the crime that packs of mummers began to be feared. A legislative ban on mummers was even issued. It remained in place for over a century.

Mummers’ celebrations in America, however — which date back to colonial times — thrived.  And it is here that the tradition of mummery in the city of Philadelphia may find its origins. Philadelphia was the nation’s capital in 1790, and a large Swedish population — previously mentioned as a country rich in mummer tradition — lived in the city. President George Washington was even known to have initiated a tradition of receiving calls from mummers at his home. In the early nineteenth century, celebrations were lavish, but some became so raucous with drunkenness and the discharge of firearms in the streets that the city passed an act which declared that “masquerades, masquerade balls, and masked processions” were prohibited.

It didn’t work, and the law — never strictly enforced — was abolished in the 1850s. Celebrations continued in Philadelphia, pretty much uninterupted.

Still, by the end of the 19th century, mummers outside of the United States began to fall  out of favor. After the first World War, most British mummers’ groups (known as “sides”) disbanded.

But in Philadelphia, the tradition not only survived, it flourished. The city’s first official parade was on New Year’s Day in 1901. It continues to this day, and is now the oldest, continuous folk parade in the United States.

Still,  these mummers in Philadelphia are a far cry from the medieval revelers of old. Made up of various groups — comics, fancies, string bands and fancy brigades — Philadelphia mummers do not go door to door now begging for whiskey. Instead, they perform music and acts of comedy along Broad Street with ever more elaborate themes, costumes and productions as the years go by. It’s a proud tradition of community pride and charity for many, and one of embarrassment to some.

Is there a direct line — and link — between the medieval mummer and his 21st century Philadelphia counter-part? Insofar as the mummer represents joyous abandon and holiday celebration with elaborate costumes and behavior not otherwise so socially acceptable outside of the holidays, then yes. There is something in the human condition that wants to put on makeup or a mask and become someone different — all within the accepted social convention of a holiday and/or party.

To badly paraphrase Carl Jung, and force an analogous relationship between the wearing of a physical disguise and the mask that is our persona — “designed on the one hand to make a definite impression upon others, and on the other to conceal the true nature of the individual” (from his Two Essays on Analytical Psychology, 1953) — perhaps the (dis)guise of the mummer is an attempt to show others someone or something we can only be once a year.  Most individuals conform — go to work, consume, go to be bed, wake up, start again. The mummer, however, can be anything he or she wants: comical, colorful, musical, mischievous — jovial, yes, but even a bit menacing, depending on theme.

If for only one day out of the (new) year, the Philadelphia Mummer’s parade — for mummers at least, but for its spectators, too — is a vacation from convention and day-to-day norms.

In many ways, it is a holiday from one’s self. And we could all use that from time to time.