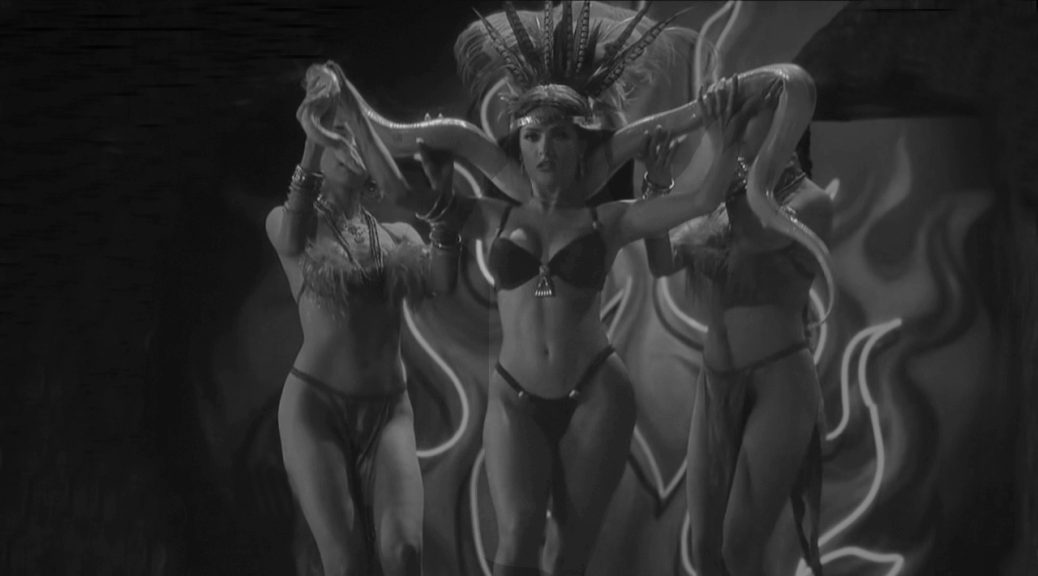 In this current climate of post Harvey Weinstein real-life #metoo horrors, FROM DUSK TIL DAWN could easily be construed as  terribly misogynistic. Distributed by Mirimax (a company co-founded, coincidentally, by Weinstein), directed by Robert Rodriguez, and written by Quentin Tarantino, it stars George Clooney (in his first film role), Tarantino, Harvey Keitel and a very young Juliette Lewis. Oh, and Salma Hayek as the most seductive of vampires — one who dances on top of a table in a skimpy bikini.

During a decade that saw undead bloodsuckers that ran the gamut from far too serious ( 1994’s Interview with the Vampire), to incredibly funny (Mel Brooks’ amusing Dracula: Dead and Loving It (1995), FROM DUSK TIL DAWN (1996) was actually a fresh take on the vampire mythos, combining elements of the heist thriller with a healthy dose of grindhouse gore. It had humor, blood (albeit green to avoid an NC-17 rating), and a biker bar.

It is the latter — the seedy south-of-the-border “Titty Twister” strip club — that sets the stage, literally, for the di rigueur overt display of partial nudity that is to be expected of late twentieth-century vampire films. Movies like Night Shade (1996), Bordello of Blood (1996) and Club Vampire (1998) come to mind (there are many others). But FROM DUSK TIL DAWN is decidedly different. Its vampires — best portrayed by Hayek as the Queen bloodsucker Santanico Pandemonium — are true monsters. Though bikini-clad, Hayek is no caricature of the femme fatale.

Moving like a serpent — with a serpent (despite the actress’ fear of snakes) — Hayek is every bit the object of desire, especially for foot fetishist Tarantino. As she pours alcohol down her leg into his waiting mouth, other men watch. But their gaze is not returned by the vampire queen.

It is telling that in a recent interview, Salma Hayek was quoted as saying: “[Quentin] makes me dance only for him. George Clooney was like, ‘How come she doesn’t look at us?’ [Quentin said], ‘Because I’m the writer.’”

So unlike the iconic vampire brides of Dracula, the undead things of FROM DUSK TIL DAWN become not only non-sexual, but non-human. Hellish demons more than inviting vamps. As throats are ripped open, and decapitated heads fly about the room, eroticism and vampirism do not converge as they do so often in this genre.

What little seduction there is quickly becomes rampant cannibalism.

When Hayek’s head turns reptilian and strippers’ skin becomes sickly grey, few audience members can still feel attraction toward these vampires. There is only repulsion.

It is what sets FROM DUSK TIL DAWN apart from other vampire films of its day.