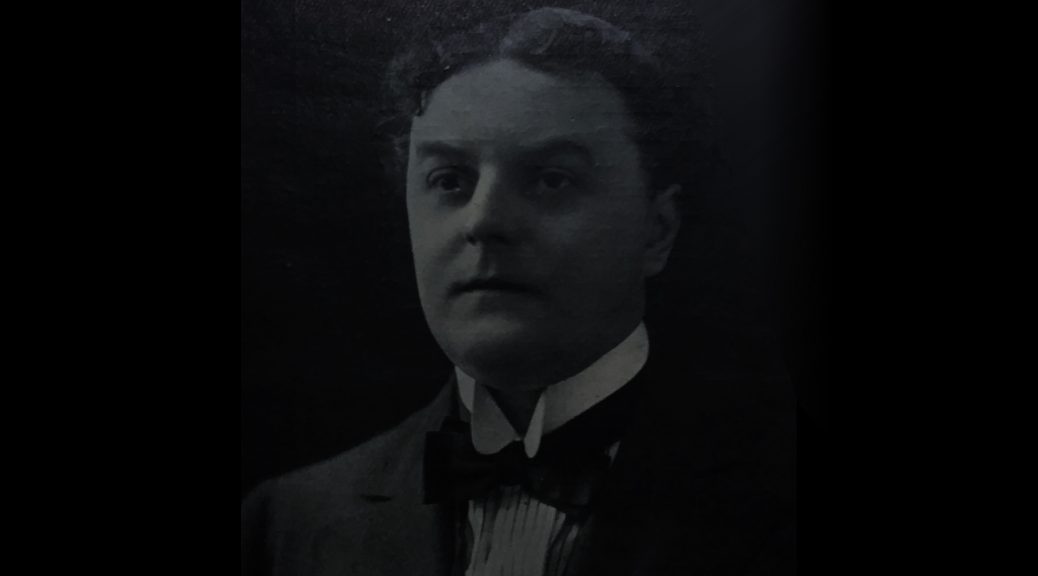 English eccentric and self-described Catholic clergyman Augustus Montague Summers (1880 – 1948) believed in the occult — so much so that his seminal works on witches, werewolves, and vampires have become as much the stuff of ridicule as they are scholarship.

Responsible for the first English translation of the 15th-century witch hunter’s manual, the Malleus Maleficarum, his life’s work, on paper at least, would present him as more of an English professor than an occultist. Yet as well known his studies were of medieval literature and Elizabethan drama to early twentieth-century scholars, his reputation for serious scholarship has been sullied. Despite his work on the origins and intricacies of the Gothic novel — to some, still essential reading — his legacy is one of oddball collectability. Yes this was a man who, despite his religious beliefs, was an acquaintance — a friend even —of occultist and magician Aleister Crowley. He fought openly with famed anthropologist Margaret Alice Murray (over witchcraft as satanic vs. legitimate religion / cult). He was known in early twentieth century circles as a man of faith who saw fictions as having firm foundation in fact. He was also a bit of a kook — dressed in black and often with a cape in a style befitting a priest from an earlier age.  But his work is nonetheless fascinating, if only for the man’s credulity. He believed accused witches tortured by the Inquisition were rightfully punished. He believed vampires — as animated corpses that rose from the grave to torment the living —were real.

Following in the footsteps of Dom Augustin Calmet (who likewise believed in the occult) and Dudley Wright (who Summers rails against as “trifling” with his supernatural topics), Summers is best known for his work about vampires. The Vampire: His Kith and Kin (1928) and The Vampire in Europe (1929) investigated the subject and all its ramifications in fantastic detail, presenting a record of folk beliefs about death and vampires that was revolutionary at the time for sheer scope and depth. If one ignores circular reasoning, misreading folklore as fact, and the author’s own cultural and religious biases, there is something at the heart of his study that can’t be ignored: Summers’ own beliefs, however misguided, are infectious and thorough — thus guaranteeing him a seminal place in the annals of vampirology for his sheer dedication to and belief in the subject.

Take note of his tone, for example, and choice of verbs and tense in this passage from The Vampire, His kith and Kin:

“The vampire is believed to be one who has devoted himself during his life to the practice of Black Magic, and it is hardly to be supposed that such persons would rest undisturbed, while it is easy to believe that their malevolence had set in action forces which might prove powerful for terror and destruction even when they were in their graves.”

Author Dennis Wheatley in “Gunmen, Gallants and Ghosts,” claims that “Summers inspired him with fear.”  Some suggest the author even used Summers’ physical appearance as a model for Canon Copely-Syle in “To the Devil-a Daughter.” Guillermo de Toro, too, was a fan (as evidenced in an interview with WIRED in 2011); when asked about folklore that influenced his Strain Trilogy, he cites Summers (and Calmet) by name.

One wonders just how many writers and filmmakers have been inspired by this odd little clergyman who so thoroughly researched — and embraced — a supernatural world that to others seemed little more than folk tales and fiction. One could imagine Todd Browning having come across a copy of Kith and Kin while directing Bela Lugosi in 1931’s Dracula. Who knows? Stephen King may even have it on his shelf.

In the end, we can laugh at Summers, but we can’t deny his sincerity. And if his 1924 introduction to Horace Walpole’s “Castle in Otranto” is any indication of his overall attitude toward things supernatural, there is an undeniable, almost poetic beauty in his view of strange and scary things; he writes

In this world there is mystery, because where there is a secret, beauty can always be hidden. There are miracles here because miracles always accompany the unknown. This desire for beauty, a sense of wonder and mystery is vivid and full of passion in the moods of romantic poets, full of subtle half-shades, and sometimes, brutally, and even somewhat vulgar, in bloody and macabre stories.

Known to often ask his acquaintances to “tell me strange things,” Montague Summers may have worn the cloak of a clergyman, but he had the heart of a Romantic poet — tainted though it may have been with puritanical leanings. The very things that repulsed Summers were too much a temptation not to explore.

In the classic vampire film From Dusk Til Dawn, when a rattled former-minister, played by Harvey Keitel, is surrounded by the undead, he asks: “Has anybody here read a real book about vampires, or are we just remembering what a movie said?” He quickly adds, “I mean a real book.” Actor (and noted special effects artist) Tom Savini (playing a character hilariously named Sex Machine) retorts: “You mean like a Time-Life book?”

Too bad none had read a copy of Summers’ Vampire: His Kith and Kin. They might have all made it out alive.

NOTE: full-text of the The Vampire: His Kith and Kin is available online, but I recommend the critical edition on amazon for those truly interested in the writings of this most unusual man.