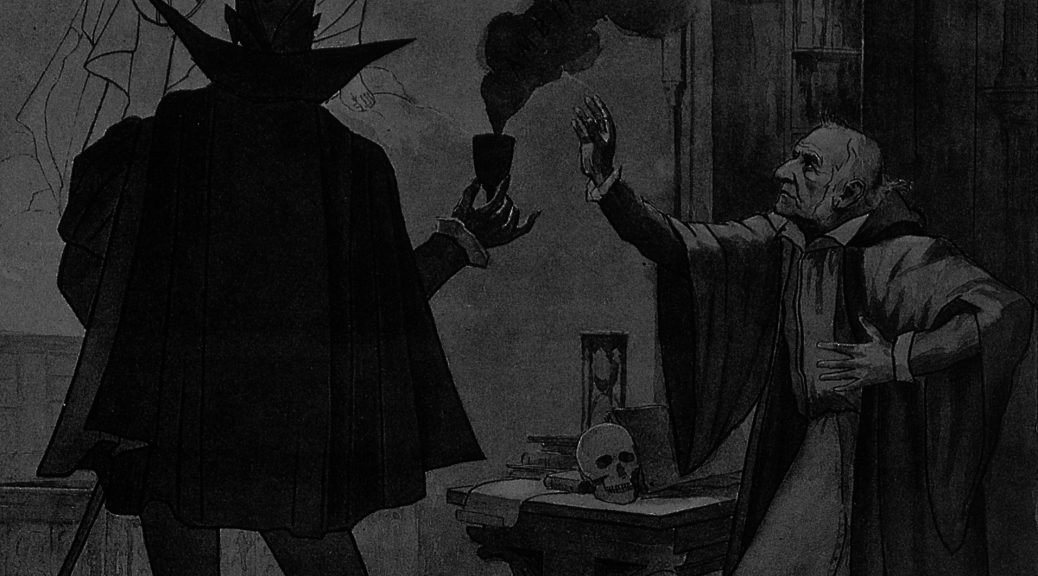 From Faust to Robert Johnson, fictional and historical figures alike have been mythologized for making pacts with the devil. Beelzebub. Lucifer. Old Scratch. Satan. The Devil is a decidedly Christian being that, while having demonic precursors outside of the Judeo-Christian tradition, is pretty much a product of the Old and New Testaments. Sure, the Babylonians had many malevolent demons. The Egyptians had their dark gods. Zoroastrianism even had a nasty spirit named Angra Mainyu. But it’s in the Tanakh, or Hebrew Bible, that Satan really takes shape — first as heaven’s prosecutor of sorts. Later, in the Synoptic Gospels,  Satan comes into his own as both the great red dragon of Revelation, and the evil being that tempts Christ in the desert. And it’s his role as tempter of Christ that leads to a depiction of the Devil as one who can fulfill desires — for a price. Much like a genie (or djinn), the Devil can deliver on all things worldly.

Theophilus of Adana, a 6th century cleric, may be the first documented story of a someone who makes a pact of this type. The archdeacon of Adana, part of modern day Turkey, Theophilus is said to have, out of humility, turned down a promotion to bishop. But when the bishop elected in his stead deprives Theophilus of his position as archdeacon, the poor priest comes to regret his decision, and seeks out a magician to help him contact Satan. In exchange for his help, Satan demands that Theophilus renounce Christ and the Virgin Mary in a contract sealed with the cleric’s own blood. Theophilus agrees, and is made bishop.

Fearing, however, that he has put his immortal soul in jeopardy, Theophilus repents, fasts, and implores the Virgin Mary to intercede on his behalf with God. Satan eventually relents, and Theophilus wakes to find the contract on his chest. He shows the contract to the legitimate bishop, who then forgives poor bastard and burns the document. Out of sheer relief, Theophilus dies and, presumably, goes to heaven. Oh, and he’s made a saint — which gives hope to everyone who’s considering selling their soul.

The tale is attributed to an eighth century scribe, Paulus Diaconus of Naples. From a modern Latin translation comes the details of the pact itself: “Let him deny the son of Mary and those things which are offensive to me,” says the Devil, “and let him set down in writing that he denieth absolutely, and whatsoever he may desire he shall obtain from me, so long as he denieth.” And so it would seem that we have the first instance of such a pact, and the importance of the written contract.

That element of such a pact — as a written contract — is repeated again and again in the centuries to come. It would eventually finds its way into literature — most notably in Marlowe’s Doctor Faustus (1592). And from the 16th to the 18th century, countless witches would be tried and executed over the accusation of such agreements.

The case of the 17th century French Catholic priest Urbain Grandier is perhaps the most infamous of these trials (and the inspiration for Aldous Huxley’s Devils of Loudun); what unique about Granier, however, is that an actual printed document was presented at his trial in 1634. Said to be penned by all manner of demons and the Devil himself, it is a mishmash of reversed Latin and many occult symbols. In it, Grandier is promised “the love of women, the flower of virgins, the respect of monarchs, honors, lusts and powers.” He’s only given 20 years before his soul is forfeit, but it would seem the Devil got his due much earlier as Grandier was tortured and subsequently burned at the stake. With phrases like “He will go whoring three days long; the carousal will be dear to him,” the contract is quite detailed in its promises.

But a simpler tale of a deal with the Devil may be actually be found in a fairy tale commonly referred to as “The Smith and the Devil.” In it, a blacksmith trades his soul for supernatural powers, and then uses this power to trap the demon with whom he made the deal. So straightforward a story, it was collected by the Brothers Grimm in their two volume (1812 and 1815) Children’s and Household Tales (though it was removed from most later editions).

Like most folktales, the origins of the story are murky. It was readily believed to be European in origin or possibly Russian. That is, until very recently when folklorist Sara Graça da Silva and anthropologist Jamie Tehrani argued that “The Smith and the Devil” may in fact be one of the oldest known folk tales on the planet, and was told from India to Scandanavia. In their 2016 study “Comparative phylogenetic analyses uncover the ancient roots of Indo-European folktales,” the authors present evidence that the basic plot of the tale is found across the Indo-European speaking world dating back over 6,000 years, to the Bronze Age.

But a signed contract? With the story of Theophilus not being readily told until the 11th to 13th centuries, it seems that the Devil requiring a physical contract is a relatively recent development, historically speaking.

All in all, I suppose it’s better to get it in writing.