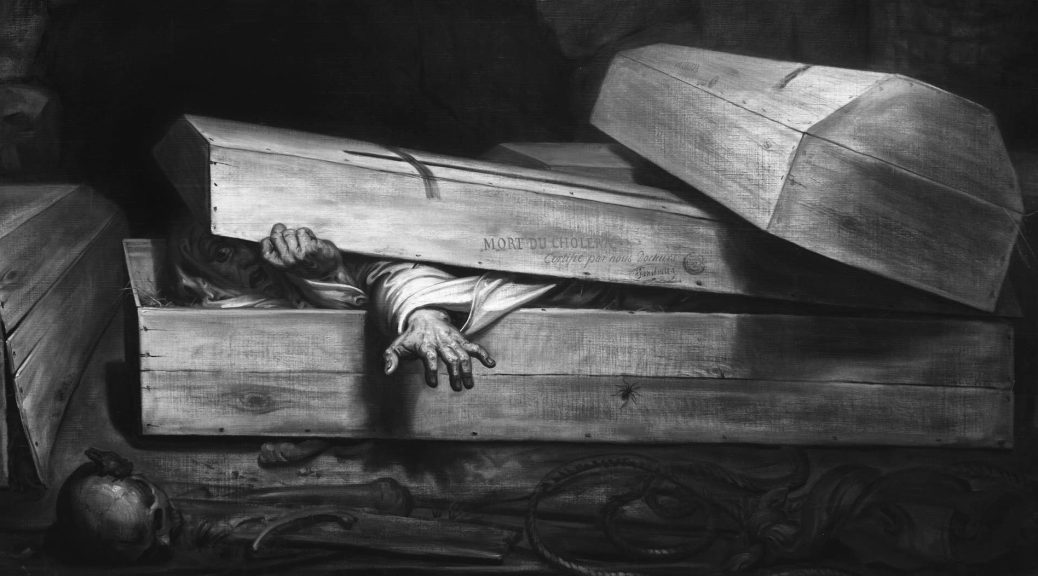 Taphephobia. Greek for “fear of the grave.” With science and medicine such as it was for hundreds of years, it was not uncommon for men and women — rich and poor, educated or not, famous, infamous, or otherwise —to be afraid of being entombed alive. On his deathbed, George Washington apparently told his secretary that “”I am just going. Have me decently buried; and do not let my body be put into the vault in less than three days after I am dead.” Spoiler: he did die, and was buried at Mount Vernon in 1799. He was not later found to have bloodied his fingers by scratching at his coffin or chewing the tips for basic sustenance. He did not become one of the undead (though undoubtedly, someone is right now working on a novel to that effect). But he did have a very real fear that many shared in the 18th and 19th centuries: being buried alive.

The earliest known written reference of a premature burial comes from Pliny the Elder in his Natural History of 77 AD. In a chapter entitled “Persons Who Have Come to Live Again After Being Laid Out for Burial,” Pliny recounts tales of people waking up after being declared dead. Fast forward to the 14th century, and there’s the story of philosopher John Duns Scotus, reportedly found outside his coffin with bloodied hands. Three hundred years later, and European rationalists would be stymied by a vampire craze — fueled by bloody bodies of exhumed corpses that were said to run amok at night and plague their families. But one need only Google for a few minutes to find modern cases of premature burial. As recently as just a few short months ago, a Brazilian woman claims to have been buried alive, spending 11 days trying to get out of her coffin.

Curiously, though, the most widespread cultural obsession with being buried alive is found in the 18th and 19th centuries. Most famously captured in Edgar Allen Poe’s The Premature Burial (1844) — where (spoiler) the real fear comes from an overactive imagination or fevered dream — the panic and paranoia felt by the 18th and 19th century taphephobe can, in many ways, be blamed on a distrust of one’s doctor(s) to properly certify death, and an all-too-ready cadre of family, friends, and neighbors who were quick to get the body into the grave — mostly, for fear of spreading disease.

It is the latter that may explain some of the vampire hysteria that began in eastern Europe and spread west as far as Austria and Germany in the 1700s.  As early as the 1670s, doctors wrote treatises about ‘grave eating’ where bodies were exhumed and found to have eaten their own shrouds or feasted on their own fingers. Bubonic plague lasted until as late as 1750, and it is understandable that villages throughout Europe feared that dead bodies could spread disease. Folklore of the vampire from Eastern Europe coupled with writers spreading the tale of Arnold Paole in Germany in 1732 added fuel to the fire that undead bodies, rising from their graves, could spread a disease, too.

It was modern-day folklorist Paul Barber — in his seminal Vampires, Burial, and Death — who most effectively argued that the incidence of presumed vampirism or being burial alive has been overestimated, and that the normal effects of decomposition are mistaken for signs of life. And as the Enlightenment gave way to more scientific explanations of all things related to death, it was serious medical doctors, not priests or doctors of philosophy, who were looked to as authorities on death and disease. 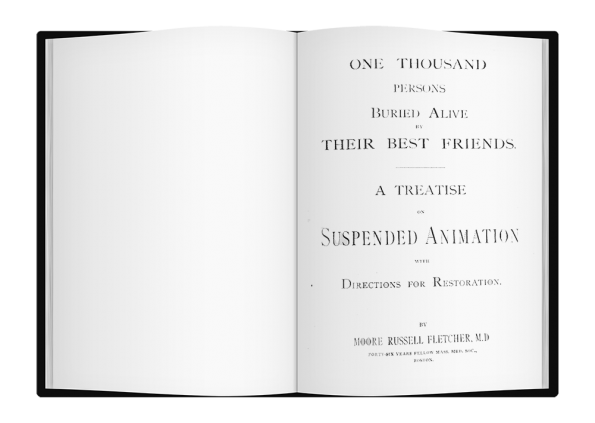 Such fear led to the formation of some curious clubs — among them, The London Association for the Prevention of Premature Burial, founded by Dr. William Tebb of Manchester (who also wrote a book on the subject, available in its entirety, here). His 1896 treatise is definitely a far more credible examination of the possible causes of, and ways to avoid premature burial than Fletcher’s (again, one thousand persons???); at nearly 400 pages, Tebb’s book is quite comprehensive, leading one to believe that the phenomenon was quite prevalent and quite real as the nineteenth century came to a close. Of course, modern-day scholars say it wasn’t, but that doesn’t make the beliefs any less potent.

This is not to say that people were no prematurely buried. Many an article online documents case after case in the nineteenth AND twentieth centuries. Authors and filmmakers a century after Poe wrote his seminal tale continue to fan the flames of this fear of being placed alive in one’s grave. There was even a most effective (and well reviewed) modern thriller, 2010’s Buried, that made the fear of live burial very much a possibility in this, the twenty-first century.

But is it all fiction? Actual or embellished, stories like the aforementioned Brazilian keep alive (pun intended) the notion that premature burial, even in the age of modern medicine, is still a possibility.