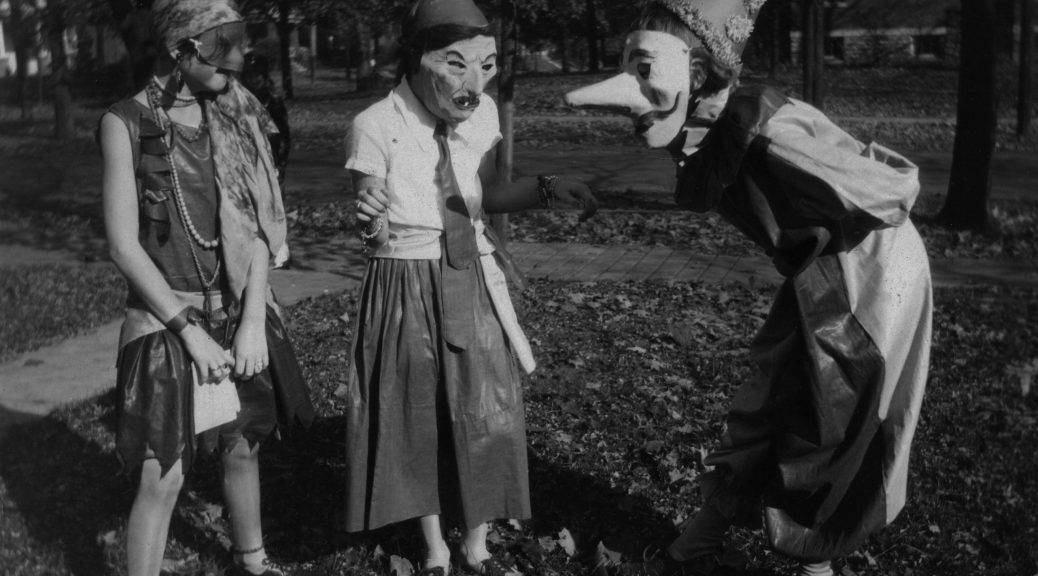 Any writer exploring the evolution of the Halloween costume could end up writing a book. From the homemade masks of children in the early twentieth century to the proliferation of sexy get-ups that line the walls at party stores in this, our new millennium, Halloween costumes always express something of the psychology of the wearer, and the times in which they live.

Tracing its origins back centuries to a pre-Christian Celtic festival celebrated in Scotland, Ireland, Wales, Brittany and Cornwall, Samhain — appropriated by the Church and given a sanitized and saintly moniker of “All Hallow’s Eve” — found celebrants both mumming and guising as early as the sixteenth century. These mummers / revelers went house-to-house in costume (or in disguise), reciting verses or songs in exchange for food. But the costumes were simple — rural and animal in nature.

It wasn’t until the nineteenth century that Halloween costume parties became more prevalent. But when the celebrations began to get too out-of-hand for Victorian sensibilities, the raucous parties for adults soon transformed into a more acceptable playful excursion deemed only appropriate for children.

By the early twentieth century, most of the traditions we associate with children going door to door for treats were well in place. Early on, their costumes were handmade: exaggerated papier-mâché faces, harlequins, and all manner of animals — from ravenous wolves to cute fuzzy bunnies. By the nineteen-fifties, mass-produced costumes made of plastic allowed kids to now be Bugs Bunny (not just any rabbit), or eye-patched pirates and red devils as in the picture at right.

Still, adults couldn’t resist the masquerade. Hundreds of photos from the early twentieth century show some disturbing Halloween costumes, like the creepy clown shown to the left.

Many psychologists have speculated that the reason both children and adults alike love dressing up is that — no surprise — a costume allows us to escape ourselves, and express a side of our personality that we can’t show in polite society. For children, it’s part of the act of imaginative play.

For adults, however, there may be more going on than just wanting to have some fun. Costumes can reveal much about our nature.

It’s an observation best made by Mark Griffiths, a psychologist writing in Psychology Today, when he paraphrases a colleague’s take on the matter; he writes that “psychotherapist Joyce Matter… examined whether fancy dress costumes bring out a person’s alter ego (or as she termed it, an individual’s “shadow side”).” This Jungian shadow doesn’t have to be dark and dangerous as the name implies. As Griffiths puts it: “I have come to believe the shadow side is not necessarily dormant characteristics that are negative—they often contain positive aspects of self which we have not been free to embody. Once we honor and integrate them, they can become powerful strengths.”

Those who feel physically weak might dress as Superman. A devout Christian might entertain being the Devil for an evening. Some cultural theorists refer to such disguises as “costumes against type.” As to the gory and grotesque? Perhaps it’s a way of dealing with one’s own mortality, or being able to scare and be scared without the threat of real physical harm — or even death itself.

How then, though, do we account for a more recent phenomena that Elizabeth Greer, author of the paper The Rise of Slut-o-ween, calls, not surprisingly, “slutoween”? Placed in the context of a psychological need to be free to embody an aspect of self that we otherwise keep hidden the other 364 days of the year, sexy costumes — the sexy nurse, the sexy cop, etc. — are a way to adopt a sexual persona that, in theory, won’t carry the label of “slut” beyond the one day societally allowed for being perceived as a sexual object, or sexually uninhibited.

“You’re not worried about being judged,” says Gail Saltz, a psychiatrist and host of “The Power of Different” podcast, recently interviewed by Medical Daily. “You get attention you unconsciously or consciously want.”

Costumes always draw attention. And this desire to be seen as someone different, mysterious, or uninhibited is not confined to Halloween.  For centuries, there have been masquerade balls. There’s Mardi Gras. There are LGBTQ events where the donning of costume is an expression of identity. And most recently, there is the now multi-million dollar phenomenon of CosPlay — fueled by comic and horror conventions around the world (most notably, once every year in San Diego). CosPlayers take costuming to the next level: spending months in preparation, and creating social media celebrities. Over half a million people alone belong to just one of the many groups on Facebook.

Complications in costuming come, however, when trends like “slutoween” spill over into costumes for tweens (and even younger children) — sending quite disturbing messages to young girls that growing up means dressing up like a sexual object.

Even worse are situations when costumes become outright racist.

Blackface in Halloween costumes dates all the way back to the nineteenth century. And while one would think we now live in more enlightened times, offensive stereotypes of minorities are evident in many a homemade costume. About a decade ago, the NY Times covered a controversial Halloween costume contest held at an immigration enforcement office party where a white agency employee “wore a dreadlock wig, what looked like a prison jumpsuit and black face paint.” One would think we left this kind of ugliness behind, but, of course, when even our television news personalities seem to defend its history (if not its use), one can begin to see that costumes have had, and continue to have a dark side — independent of the Jungian shadow. There’s a bit of the sinister in some costumes, and it’s not the kind of sinister that accompanies cheap and silly scares.

When all is said and done, if a costume — be it Batman or a sexy nurse (or a sexy Batwoman for that matter [who, not to overly complicate things, happens to be a kick-ass lesbian in the comics]) — empowers the wearer to express healthy aspects of self that are otherwise kept down in order to survive the everyday “normal” world, all the better.

The freedom to be someone else by putting on a costume — if only at Halloween — can indeed satisfy our shadow side. More than the imaginative play of a child, it can be an act of revelation.