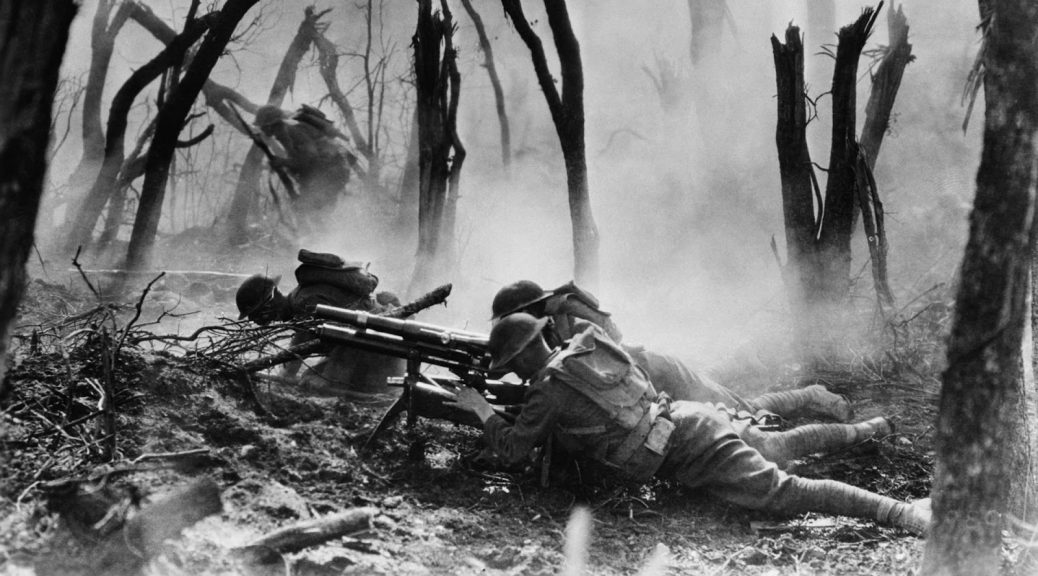 It has been one hundred years since “the war to end all wars” ended. And in his new book, Wasteland: The Great War and the Origins of Modern Horror, W. Scott Poole explores how the carnage of the first world war gave birth to the modern horror film.  “The horror created over the last few decades owes so much to ideas that appear in the films made by veterans of the Great War after 1918,” writes Poole. “Armies of the living dead… vampires… murderous slashers — all these appear in the work of the directors of the First World War era.” As does a re-imagined version of the Frankenstein monster made popular by Universal Studios in the nineteen thirties and forties.

The seeds were planted early after the armistice. German directors F.W. Murnau and Fritz Lang — who both fought in the war — introduced horrors of wholesale slaughter (Nosferatu [1922]) and mechanization (Metropolis [1927]), respectively. Even actors like Bela Lugosi, who served in the Austro-Hungarian army, knew well the horrors of WWI. It most certainly had to have an effect on their work.

The argument is not new. Film scholars like David Skal for some time now have noted that traces of post-war trauma can be seen in the silent films of the nineteen twenties.  Perhaps the finest of all German expressionist films of the silent era, The Cabinet of Doctor Caligari (1920), was, reputedly, directly born out of the war; the script, written by Hans Janowitz and Carl Mayer, has been argued by some writers (like Jon Towlson in his Subversive Horror Cinema: Countercultural Messages of Films from Frankenstein to the Present) to have come directly from the authors’ embitterment with the military and distrust of authority after World War I. This distrust comes across directly in the film as Cesare, the somnambulist (a symbol of the unquestioning soldier) is controlled by Caligari (the authority) and made to be a murderer. Janowitz, an officer in the war, would have experienced the carnage first-hand. He would later become a staunch pacifist. For his part, Mayer feigned madness, and argued with an army psychiatrist that would eventually declare him unfit to fight in a war that Mayer deemed “criminally insane.”

Letters from the front show just how terrible the war was.

“We wear our respirators because of the awfull (sic) smell of the dead,” wrote one British soldier. French Corporal Louis Barthas — in notebooks that have been recently published in English — recalled “the disagreeable tic-tac of machine guns,” that turned men “into marmalade.” And a German medical officer, the novelist and poet Hans Carossa, recounted: “Turning round, I looked down on the dying face of a man of about 30… through a grey cape which covered his breast a slight vapour was rising… under his torn ribs, his lungs and heart lay exposed.”

With reports like these, was it any wonder then that men who returned from the war were unable to escape the images of mangled bodies and corpses piled high in the mud?

Director James Whale, certainly, drew upon his experiences in the war. Captured on the Western Front and having spent time in a German prisoner-of-war camp, he was the first man to direct the great anti-war play, R.C. Sheriff’s Journey’s End. In his autobiography, Sheriff said of Whale’s production that “through innumerable small details, he [Whale] had given it a touch of crude romance…” and that “above all it was real,” adding that “any man who had lived in the trenches would say, “This is it. This is what it was like’.” Whale would go on to make the lead character in The Old Dark House (1931) a cynical WWI veteran. In 1937, he would direct The Road Back, the story of German soldier trying to return to civilian life.

In talking to Publisher’s Weekly, Poole directly makes the connection between the piles of bodies a soldier would have seen to the imagery used in Whale’s Frankenstein.

“One of the things that’s important and generally forgotten in terms of soldiers’ and civilians’ experience of World War I is that there probably had been no other time in history when human beings had been exposed to such a large number of dead bodies for extended periods of time. This is an aspect of the trenches on the Western Front that every soldier’s memoir talks about. It’s a very direct experience that some of the iconographic horror images of the 1920s and the 1930s—probably most famously James Whale’s Frankenstein—deal with.”

Whale’s work has been viewed using the prism of the first World War before — most notably by Christiane Gerblinger in James Whale’s Frankensteins: Re-Animating the Great War. And bloggers like Kimberley Lindbergs have picked up Gerblinger’s argument and run with it. Lindbergs, in particular, goes out of her way to show side-by-side comparisons of digging in the trenches juxtaposed with Frankenstein and Fritz looking for bodies in the cemetery. It is a relatively effective argument, considering that it is know that Whale used leftover sets from All Quiet on the Western Front (1930) in Frankenstein.

The basic premise is this: that the Frankenstein monster played by Karloff is so radically different from the creature described by Mary Shelley because he was shaped by the events of the Great War (and, to a lesser extent, the Great Depression).

But can we presume that Whale intended for the the implication to be there? Certainly, Whale’s imagery of bodies on operating tables, and overcrowded and unkempt graveyards add to the argument. It is the medical establishment — the doctor — that makes monsters. It is the doctor that holds in his hands the power of life and death. It is easy to make this argument: compare Frankenstein’s lab with the surgical hospitals of the first World War. They are both theaters where bodies are stitched back together.

But this is all conjecture, and somewhat of a leap from experience to screen as there is no real evidence that Whale intended the comparisons between his monster and the soldiers of the Great War.  Whale himself only once even barely referenced the war (in an off-hand remark delivered in his inimitable style), saying “A director must be pretty bad if he can’t get a thrill out of war, murder, {and] robbery.” Indeed, Whale seemed to treat the war as any other influence on his life. Arguably, his homosexuality is a major theme to be explored in works like Bride of Frankenstein; butthe sub-text of the war just really isn’t there.

Why then do authors like Poole, Skal, Gerblinger and Lindbergs insist there is a connection?

Like a wounded solider, the monster bears the scars of battle. His face is a patchwork reconstruction. His voice has been silenced. His rebirth — coming into being as if coming back to civilian life — is fraught with rejection and suffering.  Skal and Poole both point out that, owing to advances in medicine, WWI was the first war in which men didn’t automatically die of their wounds. Disfigured men — like Universal’s vision of the Frankenstein monster — would walk the streets alongside of “normal” people. Their daily struggle? Acceptance — not pity. Much like Frankenstein’s creation. It is us who see the resemblance most clearly.

The answer, then, may lie in the makeup of the monster itself. In Shelley’s book, the creature was assembled from the better parts of bodies; by her account, he was somewhat attractive, with long black hair and haunting eyes. Sure, there was something not quite right about him — an unease that comes from all dopplegangers — but the monster that Mary Shelley created could not outright be called repulsive.

Nineteenth century stage plays moved the needle a bit more toward the grotesque — with Edison’s early 20th century monster going to almost comical extremes. But there’s somethings special about the Karloff incarnation that not only shocked audiences, but made them sympathetic to the plight of the monster. A powerful combination. And one that can be attributed to the collaboration of Karloff himself, Whale, and the master makeup artist Jack Pierce.

In a 1967 interview with the fan mag For Monsters Only, Pierce said he spent 3 months researching “anatomy, surgery, medicine, criminology, ancient and modern burial costumes and electrodynamics” before doing any sketches for the monster. Since Frankenstein wasn’t a skilled surgeon, Pierce figured that the scientist would opt for the easiest way to insert a brain into a corpse’s head. He came up with the neck bolts because Frankenstein was supposed to use electricity to bring the monster to life (unlike the alchemy of Shelley’s novel). Scars abound because of Frankenstein’s lack of finesse with sutures.

WWI introduced much that would become the stuff of nightmares: terrible machines (given form in Lang’s Maschinenmensch?); sickness in the trenches (the “disease” brought by Murnau’s Nosferatu); and men programmed to be murderers (The Cabinet of Dr. Caligari). But it’s most lasting effect — on the world and the films that reflected it — was the overt display of horror that comes from one of the more visceral aspects of battle. Disgust. Despair. Degradation. Disfiguration. And the awful smell of death.

More than any other terror to emerge from cinema, Whale’s, Karloff’s and Pierce’s vision of the Frankenstein monster — so far removed from its literary roots — captures the real-life horror that was the first world  war. Why? There is no cold machine. No fangs of a vampire. There is only the sullen eyes of a disfigured thing that was once a whole man. Someone easily mistaken as a victim of war.