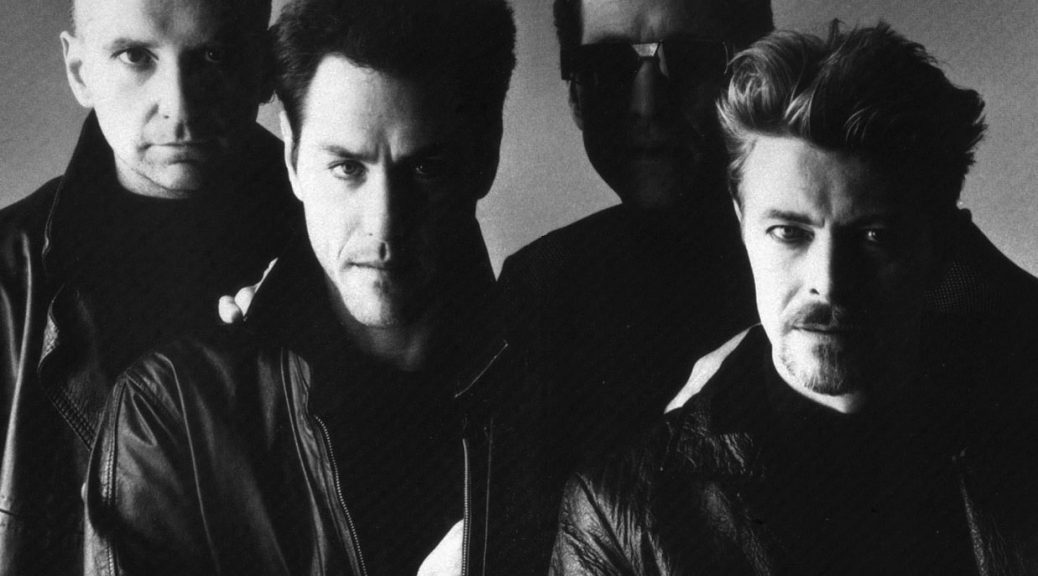 The undeniable genius of David Bowie has often been attributed to his ability to never rest on his laurels. Often referred to as rock’s chameleon, he was able to constantly reinvent himself over five decades with numerous, elaborate tours, a handful of films, and over twenty-five studio albums. Yet one period of his career is often seen as a misstep by fans and critics alike: his late eighties / early nineties turn as front-man of the band Tin Machine.

With guitarist Reeves Gabrels and Soupy Sales’ sons Tony and Hunt as its rhythm section, Tin Machine allowed Bowie to surround himself with an organized noise far from the studio polish and lackluster lyrics of his other eighties’ outings. Out of the gate with the raucous release of their first single, “Under the God,” the project couldn’t have come at a better time in his career. Casting off the safe and often silly Tonight (1984) and Never Let Me Down (1987), the eponymous Tin Machine (1989) had an attitude and edge that had been missing from Bowie’s music for quite some time.

But many in the press were not kind. “A quickly tiresome rich man’s plaything,” wrote Dave Ferman from the Fort Worth Star-Telegram. “Sit down, man, you’re a fucking disgrace,” ended Melody Maker’s review of 1991’s (admittedly less than stellar) Tin Machine II.  Mark Coleman, in the Rolling Stone Record (later “Album”) Guide rated both Tin Machine records two and a half stars, noting that “[the] albums are long on thunder and short on actual tunes.” He didn’t even bother to mention their third release, the abysmal live Oy Vey, Baby from 1992.

But Bowie didn’t seem to care about the critics, and would insist that the public would eventually come to love Tin Machine. “We’ll be listening to the first album in a few years and re-evaluating [it],” he said in a 1993 interview with NME. By then, tastes had turned. The world had heard Nirvana’s Nevermind in 1991, and grunge had taken the rock world by storm.

One could argue that Tin Machine was just a few years ahead of its time. “We were grunge before it became a thing,” said Reeves Gabrels in a 2017 interview ; curiously, he recalls a story where Tim Palmer, producer of Tin Machine’s two studio albums, told him Pearl Jam was listening to “Heaven’s in Here” (the opening track on Tin Machine’s 1989 debit) during their time working on Ten (which, along with Nevermind and Soundgarden’s Badmotorfinger, is seminal grunge from 1991). Palmer would mix Ten, and it’s not a stretch to say that a similar (but more mellow) tone can be heard when the guitar lick on “Heaven’s in Here” is played side by side with the up-tempo “Evenflow.” Just as Bowie had claimed to be influenced by the Pixies during this time (and, most likely, other, harder, alternative bands of the period), those same bands were Bowie fans. It’s musicians feeding off of other musicians — as musicians always have and always should.

Why then the vitriol for Tin Machine if it was an influential late eighties precursor to a movement that transformed the nineties? Perhaps the public at large still wanted the clean-cut man in a bright yellow suit who sang “Modern Love” just six years earlier — not this new man in black covering Lennon’s “Working Class Hero.” They weren’t ready for a scruffy white duke fronting a four-piece. They couldn’t handle the stripped-down skepticism of a religious experience in a song like “Bus Stop.”

By 1993, Tin Machine imploded, most likely due to sales — sales of the albums, and/or Hunt Sales’ increasing drug addiction. It didn’t matter. Bowie was ready to move on. He would wed Iman, release Black Tie White Noise (a return to his softer side), and eventually find his way to his next inspiration: drum and bass, electronica, industrial rock, and Trent Reznor. The latter would help reinvent Bowie’s sound through his next two albums: Outside (1995) and Earthling (1997). On both, Reeves Gabrels would play.

In an interview from 1997, Bowie would be asked about Tin Machine, and his perspective is telling. Tin Machine was first and foremost, a band. A rock band. Not a solo endeavor. It was “a return to the embryonic fundamentals of rock music, simply in order to clear my head for a while,” he said. Why? “In order to breath life into my being as a musician again.”

Whether or not Tin Machine was among Bowie’s better works is immaterial. It was a chance for the artist to rediscover the “fundamentals of rock music” that he had lost somewhere along the way in the early eighties.

Bowie would go on to produce five more albums after ’97’s Earthling, taking a long deserved ten-year break from music after 2003. He had suffered a heart attack, and while not the primary reason for removing himself from the spotlight for a decade, it was reason enough to spend more time with family, enjoying a simpler, quieter life.

Some will say that his final two works, The Next Day (2013) and Blackstar (2016) are among the best albums he ever made. The latter would be unlike anything that came before, prescient in its themes of mortality, but all the while musically adventurous — heavily immersed in the language of jazz with Bowie displaying a vocal range that is at times, sweet and sullen, and others, staccato and almost cruel. It was sheer brilliance.

He would succumb to liver cancer two days after his 69th birthday — the day Blackstar was released.

Known for having famously once said “I don’t know where I’m going from here, but I promise it won’t be boring,” David Bowie has moved on from this world. But he has left us with a catalog that will be discovered and rediscovered by many generations to come.

Among those discoveries deserves to be Tin Machine. It may have been many things, but it was never boring.