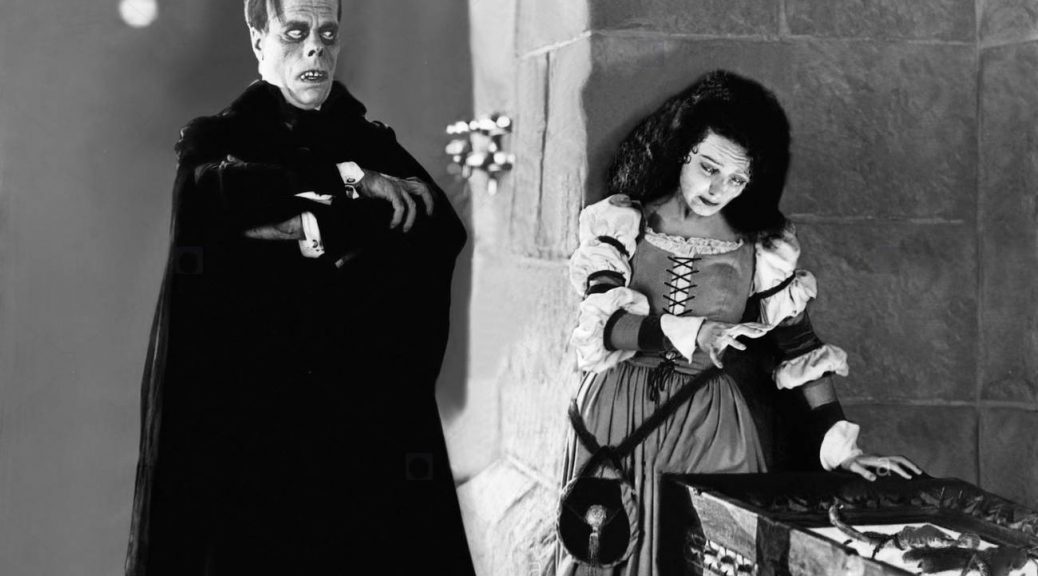 Gaston Leroux’s 1910 novel, The Phantom of the Opera, has been filmed at least a half a dozen times, turned into a very successful Andrew Lloyd Webber musical, and used as inspiration for one of the most ubiquitous halloween masks. Behind masks, we hide our true selves. Carl Jung would say those are masks of the persona: the ego adapting to its circumstances. But the physicial mask that hides the horrible, or a face to be pitied (or both)?  That’s unique to Romantic fiction. Especially to the horror genre. And certainly to Phantom of the Opera.

For Leroux, the mask as symbol is quite complex; in addition to having his phantom, Erik, hide a hideous visage, Leroux writes that “none will ever be a true Parisian who has not learned to wear a mask of gaiety over his sorrows and one of sadness, boredom, or indifference over his inward joy.” We are challenged to confront that we all wear masks — not just the ghost of the Opera house that longs for the beautiful Christine. In the gothic tradition to which Leroux’s novel belongs (along with all the adaptations that come later), the masked face is definitely romanticized.

The tale is familiar (well, to people like me it is): Erik hears Christine sing, and is captivated. But he knows himself to be so deformed that Christine will be repulsed by him. So he waits, secretly aiding Christine is her career. Minor characters are literally disposed of, and the main characters eventually find themselves at a pivotal moment when the mask will come off. Hideous boy will stand before beautiful girl, and all will be revealed.

But all what? Disgust? Pity? Overwhelming love?

Here’s where the novel and its many adaptations differ.

In the novel, when Erik is alone with Christine — away from her suitor, Raoul (whom Erik has imprisoned) — he lifts his mask, revealing his deformity, and kisses her on the forehead. She returns his kiss. Erik then reveals that he has never received a kiss — not even from his mother — and is quite overwhelmed with equal parts sadness and joy. He tells Christine that he has never felt so close to another human being, and turns from wicked ways — releasing Raoul. Why? The novel makes it clear: he has been saved by love. Indeed, Leroux has him dying because of love at the end of the novel. Christine buries him, then takes off with the handsome Raoul.

Fifteen years later, in 1925, Universal would adapt the novel to the silent silver screen.  Its producer Carl Laemmle (who would later go on to produce both Dracula (1931) and Frankenstein (1931) for Universal), chose Lon Chaney — the man of a thousand faces — for the central role. And in a post World War I world where the horrors of war left mutilated men, it is not beyond reason to assume that Chaney based at least some of his makeup on the poor broken souls who had returned from Europe with faces torn apart by German shrapnel.

Noseless and lipless, with a sunken-eyed face that looks more like a skull than that of a man, Chaney’s phantom goes way beyond the novel with the extent of Erik’s deformity, and it changes the whole tone of the story. Despite Christine still getting the attention from the phantom that leads to he success at the Opera house, her fear — our fear — is real. This phantom illicits horror — or at the very best, our pity. And instead of Erik lifting his mask in an act of love, Chaney’s phantom is dramatically unmasked, by Christine, in one of cinema’s most written-about reveals.

Erik’s unmasking is not his own decision. It is sudden. It is terrifying. And it leaves Christine horrified on the floor. A captured Raoul — again, Christine’s suitor — can only be freed if Christine makes a choice of two levers. A challenge is made by Erik. One lever will free Raoul. One will blow up the Opera House. But there’s a catch: free Raoul, and agree to marry Erik.

The tension is palpable. The audience sees Erik as a true monster, and wants so very much for Christine and Raoul to be together. And that is what they get, in a sacrifice made by Erik. He tricks Christine. His intention was apparently to free Raoul all along, and escape the Opera House with Christine. Only he is thwarted by an angry mob who attacks him and throws him into the Seine. Christine and Raoul? They are seen on honeymoon at picture’s end.

Still, the filmmakers initially intended to preserve the original ending of the novel.  They filmed scenes in which Erik dies of a broken heart at his organ after Christine leaves him. But the preview audience apparently hated this ending. They wanted the monster punished, and the lovers to be reunited.

Throughout the many adaptions — from Claude Rains in 1943, to Herbert Lom in Hamer’s version of 1962, to Brian de Palma’s bizarre Phantom of the Paradise (1974) — the stories change.

Music becomes the true love of the phantom in some. Disfigurement at brith because a tragic encounter with acid in another. But the central theme beneath all is this push and pull between the beautiful chanteuse and the disfigured musician. Sometimes repulsion. Sometimes attraction. Always Romantic in the Gothic novel sense of the term. Except, perhaps, in DePalma’s work, where the Gothic gives way to Glam.

But outside of the novel, no version is more romanticized than the Andrew Lloyd Webber musical — which manages to fuse so many elements of the tale told over the last hundred years. In the blending of outcomes, the best and worst case scenarios for poor Erik co-exist. Yes, he is hideous. But he is romantic. And despite Christine’s love for Raoul, there is a bond between her and the phantom — one that often finds its way, as with most musicals, into song — and a gift of a ring to Christine.

The unmasking has mixed reaction — at first fear, but it soon becomes pity. This pity leads to tenderness. And tenderness, to love. At the end, Erik realizes that despite his love for Christine, he must release her to Raoul. The rightful couple begin to escape Erik’s subterranean lair, but not before Christine decides to return the ring that Erik had given her as a token of his love. She finds instead a mob that has descended into the lair to kill the phantom. But as she lifts aside the cloak where she believes Erik to be, she finds only… a mask.

Masks play a central role in all adaptations of the Phantom of the Opera. Some are there for sudden horror (kill the monster!). And some are there for romantic imaginings (where did the poor tortured artist go?).

Some masks are even there to further hide the true persona — or perhaps remind us all that despite love or terror, death awaits us all. In many adaptations, In Lon Chaney’s silent film, Erik attends a ball dressed as Poe’s Red Death. His mask is a skull. Memento Mori. The reminder that life is fleeting, and that we all must die.

In the end, it is the use of the mask — and the unmasking — that addresses our own extremes of attraction and repulsion. And that moment of revelation in the unmasking is truly the most dramatic event in The Phantom of the Opera — be it novel, film, or musical.