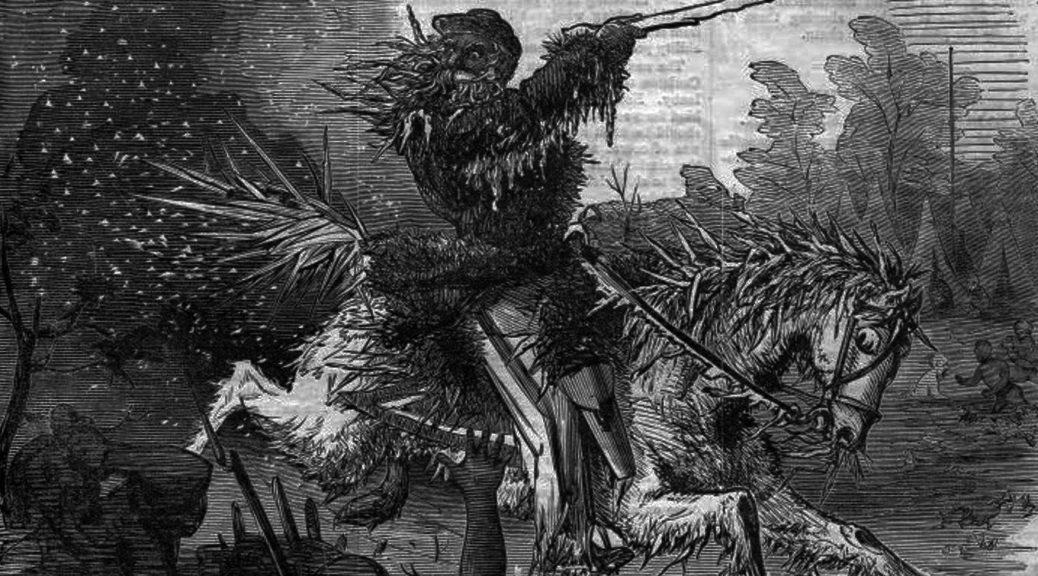 While many of us often refer to Old Man Winter this time of year — and can picture him as an older man’s face imposed on a cloud, blowing in the cold air of the season — few know much about Jack Frost. At least much beyond him “nipping at your nose” in Robert Wells’ and Mel Tormé’s classic “Christmas Song” of 1945. As a personification of winter, he shares with the “Old Man” control over ice, snow, sleet and the like, yet he is often depicted as younger, spritely, and more playful than other harbingers of cold weather. Indeed, he seems to enjoy using his powers to delight children most, and represents a more magical view of winter than his curmudgeonly elderly counterpart.

His origins are sketchy. Whereas the “Old Man” can be traced to various deities — most notable the Greek god Boreas, or even the Celtic Oak King— not much is written about Jack before the early eighteenth century. Though traceable in some form to Scandinavian folktales, he seems to have, at least partially, originated in Britain where “Jack” was a common slang word for “man.”

The first illustrated cartoon of Jack Frost is thought to be a political cartoon published in 1861 in Harper’s Weekly. Thomas Nast depicts a “General” Jack Frost freezing out the malaria that was spreading during the American Civil War. Curiously enough, Nast was also famous for creating the image of Santa Claus that we’re familiar with today.

Hannah Flagg Gould’s mid nineteenth century poem “The Frost” is perhaps the first to feature a mischievous being who leaves beautiful ice paintings on windows, although Jack is never named.

Not long thereafter, late nineteenth / early twentieth-century Scots writer  Gabriel Setoun (a pseudonym of Thomas Nicoll Hepburn) pens what it perhaps the first poem explicitly about Jack, appropriate entitled “Jack Frost.” It is here that much of the folklore seems to coalesce, presenting facets of the character that would become associated with him long thereafter. Ice painting on windows, yes. But more.

“The door was shut, as doors should be,” begins Setoun. “Before you went to bed last night.” Yet mischievously, “Jack Frost has got in…
and left your window silver white.”

In some of the earliest oral traditions, Jack is a painter who not only colors windows white, but paints frost on grass, even fall colors on autumn leaves. What Setoun does is expound and expand upon the magical qualities of Jack’s work, as the frost he paints on panes transforms into wondrous things.

The window pane of the poem shows “castles towering high” and “knights in armor riding by.” There are boats, palm trees, butterflies, and even cows and sheep.

For, creeping softly underneath
The door when all the lights are out,
Jack Frost takes every breath you breathe,
And knows the things you think about.

He paints them on the window-pane
In fairy lines with frozen steam;
And when you wake you see again
The lovely things you saw in dream.

Here there’s a clear contrast between the “Old Man” who seems little more than a stern bringer or storms, and Jack, a painter of sorts whose frosty art is transformative — the stuff of dreams.

Other writers would add to the legend, including Margaret Canby’s “Birdie and His Fairy Friends” (1874) where Jack leads  winter spirits to help children as King Winter, like the “Old Man,” is nothing but cruel. Even Helen Keller made her own version of this story, in 1891, entitled “The Frost King.”

It’s in Charles Sangster’s “Little Jack Frost,” however,  published in 1875, that Jack Frost is first seen running around playing pranks and nose-biting. Frank Baum’s The Life and Adventures of Santa Claus (1902), takes the nipping further (attacking “scores on noses and ears and toes.” Santas Claus seems to like Jack, but isn’t particularly happy that the mischievous sprite teases children.

Dozens of writers follow and build upon the tradition over the next hundred years. With each iteration, his character serves a particular theme, and, as would be expected, tone follows.

None other than Stan Lee brought him to the comics in 1941. Early in his career with Timely Comics, Lee created a Jack Frost who was more villain than prankster — or at least an anti-hero much like the Hulk which Lee would go on to create year’s later when Timely became Marvel Comics. Lee’s Frost was a young man who mysteriously wandered out of the Arctic with no memory, and the ability to wield wintry precipitation. “Because of a misunderstanding with police, he is accused of murder and becomes a wanted criminal.” The rest pretty much writes itself!

In Elizabeth Bishop’s heartbreaking “First Death in Nova Scotia” (1965), for example, the death of a small cousin leads the poet to imagining how Jack Frost might dress the body. Laid out on a table in a makeshift funeral following what would appear to have been a hunting accident, a boy “all white, like a doll that hadn’t been painted yet” would be the perfect canvas for Jack. He is evoked by the poet as quasi-savior — if only he could bring color (and life) back to the boy. “He had just begun on his hair, / a few red strokes, and then / Jack Frost had dropped the brush / and left him white, forever.”

Here, Jack cannot work his magic. Like an open hand, Bishop’s words slap us into the reality of cold, cold death.

On a much light note, Rankin Bass did a take on the character in a 1979 Christmas Special, but (with the exception of a really bad horror film from 1997 and a handful of other terrible “family” movies) it’s with the recent and popular Guardians of Childhood series by William Joyce that Jack Frost as a character has really come back into popular culture. Tailor-made for a pre-teen audience that craves adventure from characters that were once only folktales that parents told their children, Joyce’s Jack Frost was even the subject of a change.org petition to be included in Frozen 2.  Far from folktale, Jack has the potential to become a film franchise.

Like most characters who come to us from ancient oral traditions and varied cultures, Jack Frost can, and does, take on many forms. But stories of him never stray far from stressing his youth and colorful nature during a time of year that is otherwise cold and grey. He is the antithesis of “Old Man Winter,” and in that contrast is the heart of his nature — a cold hand but a warm heart wrapped in a positive spirit that should be shared this time of year when winter blues can get to even the best of us.

Waking to ice on the window, snow on the car, and rock salt on the streets, we should stop to appreciate the delicate beauty of something as simple as oft-overlooked ice crystals. For Jack Frost’s brush put them there, making the otherwise stark reality of winter a more magical time of year.