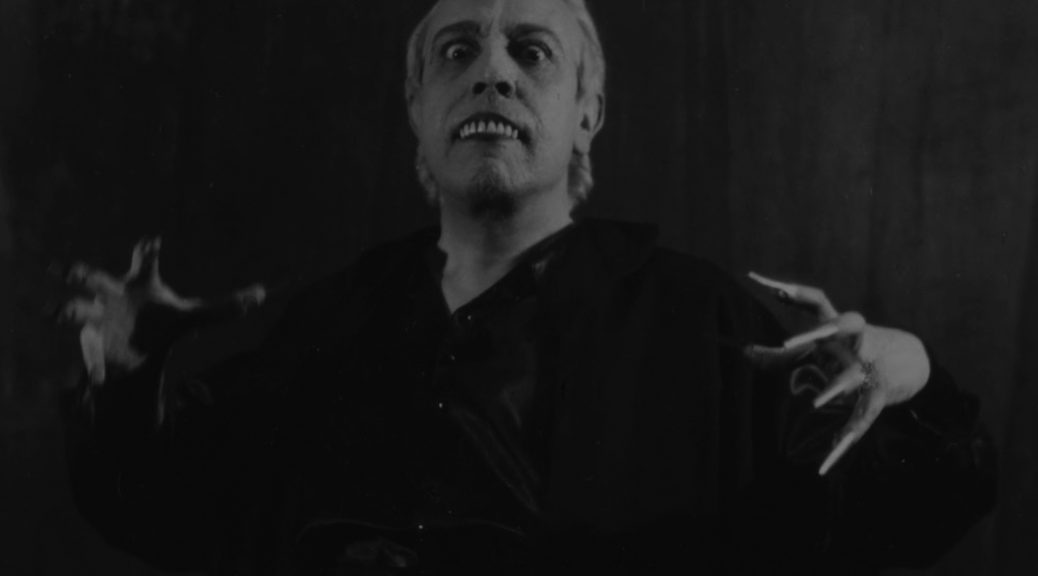 Of the 200+ films and dozens of plays adapting Dracula, one relatively lost to history is Spanish actor Enrique Rambal’s 1942 stage production. A little over a decade after Universal’s successful and influential Spanish-language Drácula (https://en NULL.wikipedia NULL.org/wiki/Dr%C3%A1cula_(film))starring Carlos Villarías, Rambal, a well-known innovator in the area of stage production, tackled the novel for stage. Using many elements that can be traced back to the Deane / Balderston stageplay of 1924 (upon which the Universal movies are based),  Rambal’s version is particularly notable for its use of numerous screen paintings that filled the stage, as well as dramatic stage effects (not to mention the addition of an opening in Translvania at Dracula’s castle). Playing the role of Dracula was Rambal himself, in rather unusually grotesque makeup that was more Nosferatu (https://en NULL.wikipedia NULL.org/wiki/Nosferatu) crossed with a kabuki mask than Bela Lugosi in his tie and tails.

Performing in Franco’s Spain must not have been easy for an artist, yet Rambal seemed to have little trouble with the government. Other than having to cut back on the cleavage shown in his actresses’ costumes, Spain’s censors had no problem with his production. He traveled freely outside of Madrid, and performed all over Spain, for his was a popular theatre — not one with pretensions of high art or subverting culture. Indeed, he is not written about much at all among literary historians. A 2012 article by Ferrer Gimeno (https://translate NULL.googleusercontent NULL.com/translate_c?depth=1&hl=en&prev=search&rurl=translate NULL.google NULL.com&sl=es&sp=nmt4&u=http://parnaseo NULL.uv NULL.es/Ars/stichomythia/stichomythia13/pdf/04_dracula NULL.pdf&usg=ALkJrhiN9UEGvGvD_BS3nfdTuoNrAwM9eQ) (downloadable as a Spanish PDF (https://parnaseo NULL.uv NULL.es/Ars/Stichomythia/Stichomythia13/pdf/04_dracula NULL.pdf)) published in the now defunct Stycomithia magazine (from the University of Valencia) is the best, and perhaps only source for detailed information about the play. It is the document upon which I take most of my summary and images.

Unfortunately, all we have are a few photos of Rambal in his makeup, a picture of the combustion engine, and descriptions of the play from Gimeno’s article (https://parnaseo NULL.uv NULL.es/Ars/Stichomythia/Stichomythia13/pdf/04_dracula NULL.pdf).