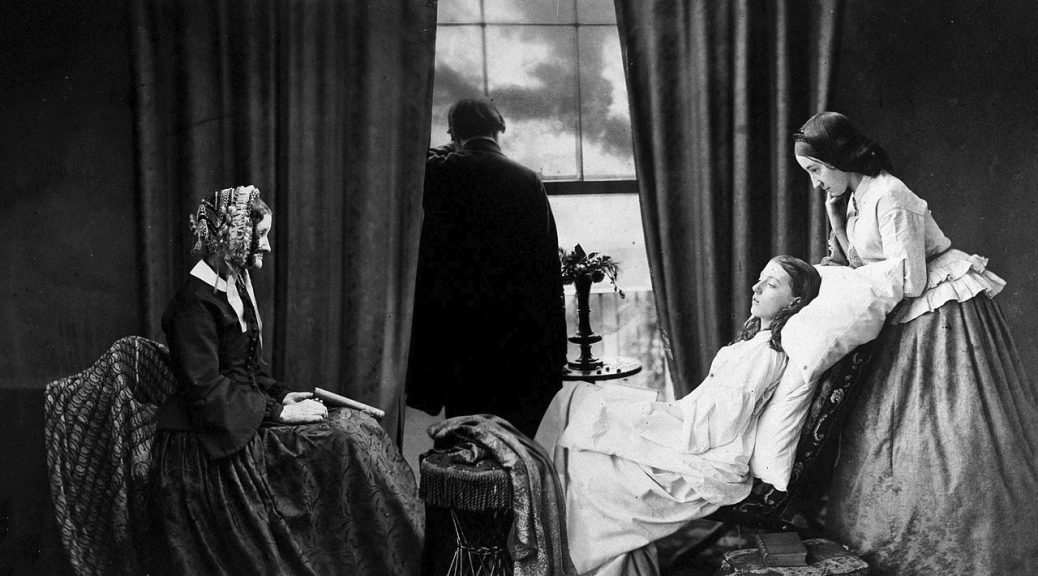 As much of the world is behind closed doors, and practicing social distancing, one wonders how COVID-19 will affect 21st century culture. Beyond, perhaps, the permanent cessation of the needless handshake, how will artists come to describe and illustrate the fear, isolation, the heroism — and, yes, even the boredom — of this terrible time? Over two hundred years ago, cholera and consumption were similarly on the minds of many. Outbreaks in the nineteenth century were constant reminders of the frailty of life, and the ever-present threat of death. While a consideration of how writers of that period dealt with disease may not necessarily shed light on what’s to come from us (in this quite different, digital age), it’s undeniable that creativity can come from all kinds of calamity. Even a pandemic.

By the dawn of the 19th century, tuberculosis, or consumption, had killed one in seven people. And severe outbreaks of cholera occured seven times over that span of one-hundred years. John Keats died from tuberculosis in 1820. Tchaikovsky, of cholera, in 1893 (though some say suicide). Poets, musicians, painters, sculptors. The lists of famous people who have died from tuberculosis, and those who succumbed to cholera, are lengthy. The Brontë sisters. Anton Chekhov, and many others. Pandemics kill artists, but a pandemic can inspire art.

Keats’ “Ode to a Nightingale” (1819) was written as the poet became increasingly aware that he was afflicted with consumption. Key symptoms of it, like “the weariness, the fever and the fret” has only one outcome:

Even more direct, a lesser known poet of the Romantic period, Henry Kirke White (1785 –1806), who suffered the same fate as Keats years earlier, went so far as to come out and directly dedicate a poem “To Consumption.” There, he addresses the disease, accepting its embrace as he realizes he soon will succumb to the affliction.

Gently, most gently, on thy victim’s head
Consumption, lay thine hand! Let me decay
Like the expiring lamp, unseen away,
And softly go to slumber with the dead.

One scholar, Clark Lawlor, has written a whole treatise on the subject of “Consumption and Literature.” Then there’s Roger Platizky’s journal article on “Tennyson and Cholera.” It would seem there’s no shortage of critical essays on ways both consumption and cholera affected artists of the nineteenth century.

And beyond poetry, one need only look at Edvard Munch’s series of works begun in 1885 marking the death of his sister from tuberculosis to understand that the only way some people can deal with grief following great affliction is to capture those feelings in art.

Need all feelings in times of disease, however, be those of sadness and grief? Those who lost their lives, or lost family and friends to consumption and cholera, certainly felt terrible sorrow. Yet even among those who lost, like Edgar Allan Poe, death (of his wife Virginia to consuption in 1847) inspired beauty; with Poe, it’s in the form of his Annabel Lee (written in 1849). An idealized woman. Beauty personified. Verdi, in his La traviata (1853), sees beauty in the death of its heroine, Violetta, who — in the final stages of TB — sacrifices all for love. And the aforementioned Keats, with his brother Tom dying of the disease in 1817, writes  “On Seeing the Elgin Marbles.” There, the poet celebrates the permanence of beauty and art in the face of frail humanity.  Upon seeing the classical Greek marble sculptures, Keats is inspired that their wonder…

…mingles Grecian grandeur with the rude
Wasting of old time—with a billowy main—
A sun—a shadow of a magnitude.

Something great, like art, can be celebrate beauty, even in the “wasting” of life.

What will artists of this third decade of the twenty-first century produce during — and after — this coronoavirus pandemic? Will we see great art, music, and literature addressing our planet’s collective hopes and fears? Are there those stuck at home, in self-quarantine or practicing social distancing right now that will turn their experience — our experience — into something special? Will it be sad, or hopeful?

Some artists, like former R.E.M. frontman Michael Stipe, have already begun to address our pandemic. In “No Time for Love Like Now,” Stipe sings:

Where did this all begin to change?
the lockdown memories can’t sustain

lyrics that make us consider our situation and question if our memories of what was normal can survive the lockdown of our own self-isolation.

To our artists, we ask for help in figuring out what will be the new normal. Within their work, perhaps we can find release from — even make our peace with — anxiety about what is, and grieving for what used to be. Even during a pandemic, creativity can thrive. It is undeniable that human beings can find hope and beauty everywhere, even in the face of depression and death.

Let us hope that our trying times find us with more of the former, and less of the latter.

And not just thousands of TikToks.