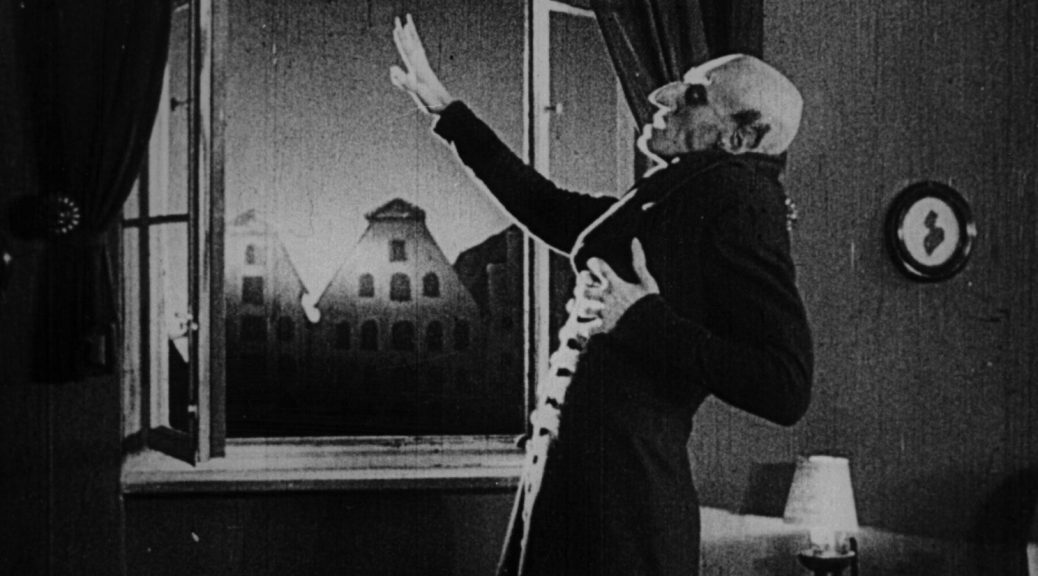 The final scene of F.W. Murnau’s silent masterpiece NOSFERATU (1922), showing Count Orlok being destroyed by the rising sun, may very well be the first time in the history of the vampire — folkloric, literary, or cinematic — that any of the undead (at least in Western culture *) was dispatched by sunlight. His fading away and disappearance into a puff of smoke leads to the film’s final title card, where it is made it clear that “…the shadow of death was gone… as if obliterated by the triumphant rays of the living sun.”

No vampire before Count Orlok expired from exposure to the sun. Lord Ruthven. Varney the Vampire. Carmilla. Even Dracula himself could move about by day. So how did sunlight as a means of dispensing with vampires come to be? Why would NOSFERATU be the first?

The vampire of folklore — particularly during the wave of suspected vampires in Europe in the eighteenth century — always attacked at night. It, and its literary offspring, had to return to their coffins during the day. But death by ultraviolet light? Not part of the mythology. It was most certainly not started by Stoker. His Dracula may be exposed to the rising sun by novel’s end, but his demise is not due to sunlight. He is instead stabbed, and has his throat slit. So the most plausible answer as to why the makers of NOSFERATU introduced death by daylight may be as simple as this: they were looking for a way to clearly finish their film with a scene as far from the ending of the novel as as possible.

In order to avoid copyright infringement, scriptwriter Henrik Galeen (who later wrote THE STUDENT OF PRAGUE), and director Murnau, veiled their adaptation of Stoker. In their retelling, Count Orlok’s fate would be the direct result of a sacrifice made by the female lead. Ellen Hutter (their Mina Harker) reads from a book that her husband, Thomas (Jonathan Harker), had explicitly told her not to. She learns from it that in order to get rid of the Count, she has to keep him, um, occupied until the cock crows. In the end, it is beauty that kills the beast. Not a cadre of suitors with knives, as in Stoker’s novel.

Stoker’s widow, Florence, still sued, and all prints of the film were ordered to be destroyed (with the final ruling on the case happening in 1925). The filmmakers didn’t have a leg to stand on. Producer Albin Grau had previously applied for a license to film the novel, but had been refused by Florence. So he went ahead and made the film anyway. This was on record, and it lost them the case (i.e., they couldn’t feign ignorance). Fortunately, for film enthusiasts, it is believed that one copy survived, and duplicates were secretly made in the years that followed.

It is in those years that followed that we don’t know much of anything about how widely the film was seen, by whom, and what impression it had upon future filmmakers.

What we do know is that in the almost 20 years following NOSFERATU, no vampire films found their fiends reduced to ash in the morning sun. Not Lugosi’s Dracula (impaled off screen). Not Dreyer’s vampyr (run through with an iron rod). Not even Dracula’s daughter (felled by an arrow).

Then comes SON OF DRACULA, Universal’s third movie to feature Dracula, released on November 5, 1943. Starring Lon Chaney, Jr. as the titular Count, SON OF DRACULA has the distinction of being not only the first vampire film to show the bat-to-man transformation of a vampire on-screen, AND the first to show a vampire turning to mist and back again, it is also the first to have a vampire die by exposure to the rays of the sun.

Though the screenplay is credited to Eric Taylor, SON OF DRACULA is from a story first conceived by Curt Siodmak — he of WOLF MAN fame (1941). In it, Dracula’s portly “son” (spoiler: it’s actually Dracula) goes by the name Alucard (which, with its simple reversal of letters, surprisingly seems to confuse the cast of characters until well into the film). He seduces a southern belle, and takes possesion of a Lousiana plantation before being exposed — figuratively as a vampire, and literally to the rising sun.

Just how much of the story is Curt Siodmak’s is unknown. His brother, Robert, who directed, hated the script, and reputedly fired his brother. Eric Taylor was ultimately credited with the screenplay, and Siodmak with the story. So who actually came up with the idea to have the Alucard killed by the sun?

Evidence would suggest it was Siodmak’s. After all, Siodmak was adept at dreaming up supernatural lore where none eisted before; it was he who introduced much of the werewolf lore we accept as canon today. More importantly, Siodmak grew up in Germany, and was active in the arts. He could very well have seen NOSFERATU when it premiered in March of 1922.

Born Kurt Siodmak in Dresden, in 1902, Curt worked an engineer early in his career, having had a doctorate in mathematics. But his interests, it seemed, were in the arts. He wrote novels, and used his connections in artistic circles to become involved in German cinema of the nineteen twenties. First, he and his wife-to-be Henrietta de Perrot signed on as extras in Fritz Lang’s METROPOLIS (1926). He wrote a number of screenplays in 1929, and even invested royalties from his early novels in the 1930 movie MENSCHEN AM SONNTAG, directed by his brother. His 1931 novel F.P.1 Antwortet Nicht was adapted to film in 1932 (starring Peter Lorre). The list goes on.

Would it be too much of a stretch, then, to believe Siodmak — whose social circles would have included filmmakers — was quite familiar with Murnau’s NOSFERATU? Seeing the vampire killed by sunlight, Siodmak could have taken that idea and banked it for a future where it just might come in handy.

In 1937, Siodmak emigrated to the U.S. for fear of the growing tide of anti-semitism in his homeland. In 1941, he was given his big break in Hollywood, penning the screenplay for THE WOLF MAN. He would go on after SON OF DRACULA to write the screenplay for HOUSE OF FRANKENSTEIN (1944), where Dracula (this time played by John Carradine) also dies in sunlight.

THE RETURN OF THE VAMPIRE

Of course, like most Hollywood stories, this one has a twist. Seven years after its German release and subsequent destruction courtesy of Florence Stoker’s lawsuit, a surviving / duplicated print of NOSFERATU was shown to American audiences on June 3, 1929.

It is quite possible that a veteran screenwriter named Randall Faye or the younger Griffin Jay (who would go on to write a handful of horror movies, including THE MUMMY’S HAND (1940) and THE MUMMY’S TOMB (1942)) were in the audience for that showing of NOSFERATU. Both are credited with writing THE RETURN OF THE VAMPIRE. In that film, released November 11, 1943, Bela Lugosi’s Armand Tesla is destroyed when a bomb strikes a cemetery, and the rays of the rising sun reduce the vampire to bones.

That SON OF DRACULA and RETURN OF THE VAMPIRE were released only six days apart casts some doubt as to whether Siodmak was the first to ressurect the idea of dispatching the undead with the light of the morning sun. Perhaps Faye or Jaye can be given the credit.

Not knowing whose idea came first, it’s difficult to determine whether it was Alucard or Tesla who was the first of Hollywood vampires to get crispy by light of day. We might never know.

But what we’re left with in the seventy-five plus years since is a legacy of vampires who die by rays of the sun. From the dramatic death of the Count in Hammer‘s HORROR OF DRACULA, to Anne Rice’s literary dandies, to the ravenous monsters of FROM DUSK TIL DAWN (who actually explode), death by daylight is now permanently part of vampire lore.

You can watch NOSFERATU in full HD quality below.

* There are stories of the Jiangshi from the Qing dynasty in China where this pseudo-vampire / zombie withdraws when the cock crows, but it’s not clear whether sunlight kills them. I suppose one could argue that sunlight didn’t kill Count Orlok either, and that the cock crow at dawn just made him turn to a mist and go away. To live to drink another day.