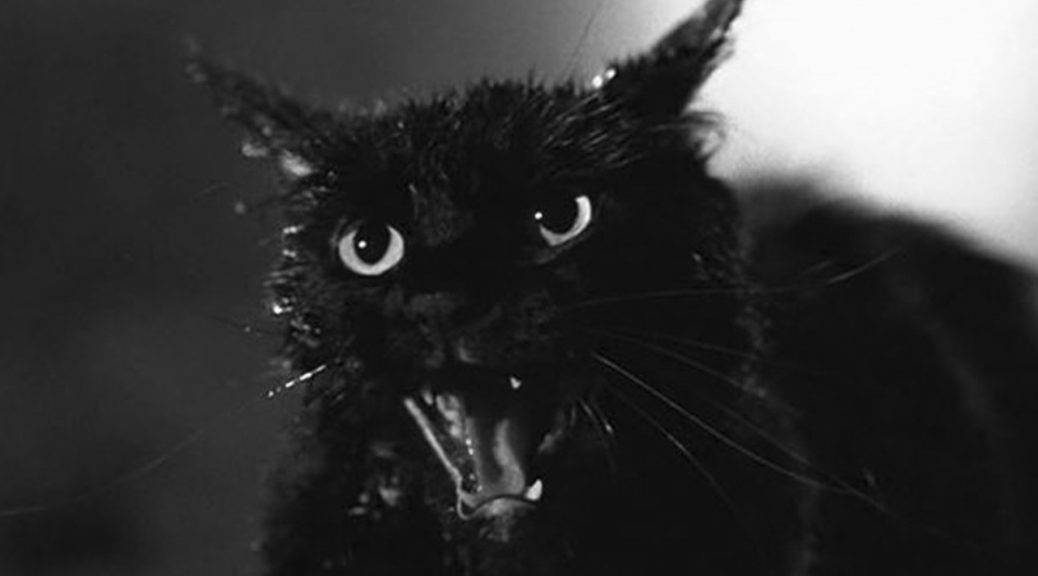 Cats as mysterious creatures is more widely accepted among cultures worldwide than is certitude that the earth is round. You  will never find anyone arguing the former. Ubiquitous are tales of cats as otherworldy animals — from ancient Egypt to the modern day. It’s only natural, then, that the mythology and folklore of cats would find its way to film. And no films are better suited to tales of cats than those of the horror genre.

An 1894 short called “Falling Cat” by French scientist Étienne-Jules Marey is believed to be the first film in history to show a live feline; it consists solely of a cat falling down and landing on its feet. Why do we say a cat has “nine lives”? Its righting reflex, apparently. Mystery solved. But not really. Throw all the science you want at it; the fact remains that cats are mysterious creatures. The supernatural in our homes.

That writers of the nineteenth century inspired filmmakers of the twentieth is not surprising. And that Edgar Allan Poe is first and foremost among them is no surprise either.

Poe’s titular black cat alone has been the subject — even title — of several films. Boris Karloff totes one around in the 1934 film bearing the name (with little other resemblance to Poe’s classic). Similarly separate from anything resembling Poe is 1941’s THE BLACK CAT — a semi-comedic film in the “old dark house” style with the now common trope of a crazy cat lady.

Closer to Poe is 1966’s THE BLACK CAT where a mentally disturbed man is convinced his black cat is possessed. Closer still is Roger Corman’s wildly entertaining TALES OF TERROR (1962) that finds Peter Lorre and Vincent Price in a mash-up of Poe’s story with another of the author’s works: “The Cask of Amontillado.”

But tales of a cat as a truly supernatural being get no better than Corman’s atmospheric Poe adaptation TOMB OF LIGEIA (1964). There, Vincent Price as the mournful eccentric Verden Fell (one of the best named characters in all of horror films… with the coolest sunglasses) has the spectre of his wife’s death hanging over him.  Her spirit seemingly inhabits a black cat that torments his new wife, Rowena.

“The eyes, they confound me,” says Fell of cats. “There’s a blankness, a mindless sort of malice in some Egyptian. They do not readily yield up the mystery.” By film’s climax, the cat attacks Fell as Ligeia’s tomb burns down around him.

Written by Robert Towne — best known for his Academy Award-winning screenplay for CHINATOWN (1974) — TOMB OF LIGEIA takes Poe’s theme of the dead having influence over the living and adds possession to the mix. Is it metempsychosis? Or is it paranoia? That the cat could be a symbol of Fell’s unnatural love for Ligeia, or her undying influence (and possible revenge?), is left to the audience to decide.

Revenge, however, is definitely at the heart of Hammer’s 1961 SHADOW OF THE CAT, starring studio regulars André Morell and Barbara Shelley. There, a cat named Tabitha who witnesses the murder of her owner, exacts revenge on her killers just as they try, and continually fail, to kill her.

Cats exacting revenge runs throughout Rank Organization’s THE UNCANNY (1977). Although it performed poorly at the box office, and is pretty much universally panned, it is notable for star Peter Cushing’s portrayal of Wilbur, whose book about cats — as supernatural creatures and the devil in disguise — frames not one but three tales of feline revenge.

The theme of a cat as avenging devil may be at its most gory and over-the-top entertaining in an adaptation of a 1977 Stephen King short story entitled “The Cat from Hell.” Directed by George Romero as the second of three stories in 1990’s TALES FROM THE DARKSIDE, “Cat from Hell” finds a wheelchair bound old man named Drogan hiring a hitman to kill a black cat (whose visage graces the header of this blog post). Drogan believes the cat is murderous. Downright evil. When it is revealed that the man’s pharmaceutical company killed thousands of cats while testing a new drug, it becomes clear that the cat is not evil as much as it is vengeful: exacting its revenge as it kills Drogan’s sister, friend, butler, and hitman, before ultimately dispatching Drogan himself.

But cats are not always killers. Sometimes, they are our saviors. 1985’s CAT’S EYE, written by Stephen King, finds a cat named General figuring into three separate stories. The last — and most effective — is the one named for the cat, which finds General at the home of a little girl whose mother dislikes the animal — going so far as to have it euthanized. But General knows that a malevolent troll has moved into the little girl’s home. And it’s up to the cat to fight the troll and protect the child.

Then there’s the unassuming white kitty in 1999’s remake of THE MUMMY. By merely walking across piano keys, it scares Imhotep, the titular character, and the monster runs away.

Avengers. Saviors. Emissaries of the dead, or the dead themselves transmogrified, cats will undoubtedly continue to capture the imagination of audiences eager to delve into their many mysteries for years to come.

Insofar as to how they have been used in horror films, this post has only scratched the surface.