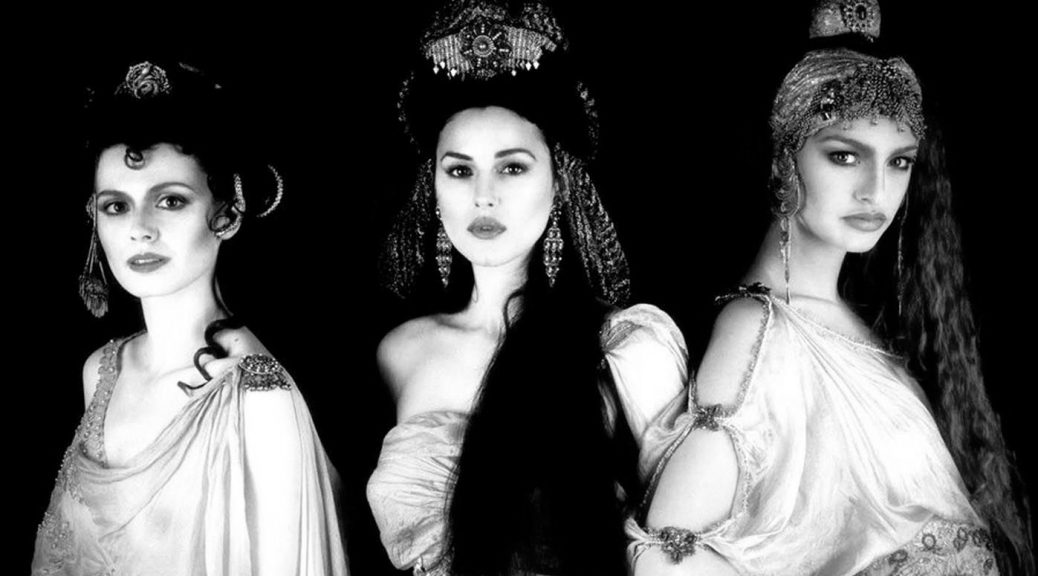 Three Fates. Three witches in MACBETH. Three brides in DRACULA. Omne trium perfectum. Everything in threes is perfect or whole. The primary colors. Brahma, Vishnu, and Shiva.  Three little pigs. Of course, celebrity deaths also come in threes. Christ was tempted three times in the desert. And in WWI, lighting three men’s cigarettes on one match meant death for the third man, as it would likely draw the fire of an enemy sniper. Then in rhetoric, there’s a rule of three. Life, liberty, and the pursuit of happiness. Veni, vidi, vici.  Stop, drop, and roll. Sets of three just seem to make sense to us. We’re hard-wired to respond to them.

That Bram Storker deliberately chose to put three vampiresses in his 1897 novel DRACULA has been written about many times before. Some scholars point to the power of three, finding ancient symbolism in the number, or a mirroring of Lucy Westenra’s three suitors (Holmwood, Morris, and Seward) in the attraction Jonathan Harker feels toward them.  Some even argue that the vampires that tempt Harker represent an inversion of the Holy Trinity. But the truth behind Stoker’s choice to have three female vampires tempt Jonathan Harker may be as simple as this: Stoker worked in the theater.

Introduced in the third chapter of DRACULA, the vampire brides, as they have come to be known — but are never mentioned in the novel as such — are referred to in the fourth chapter as “those weird sisters” (from Jonathan Harker’s Journal, June 29). Two are dark (hair presumably?), with “aquiline noses, like the Count.” The other was “fair as fair can be, with great wavy masses of golden hair and eyes like pale sapphires.”

As Leonard Wolf questions in his annotated edition of DRACULA, one wonders if the resemblance to Dracula of the first two suggest they may be related to him (sisters? daughters?). Of the three, the blonde, his apparent favorite, may be his wife. After all, the other two defer to her for right of first bite: “Go on! You are the first,” says one of the dark-haired sisters, “and we shall follow; yours is the right to begin.” Is she Dracula’s wife? Are the others his children? Is the Count a polygamist!

That they are called sisters by Harker (and later in the novel by Van Helsing) is telling. Nowhere in the book are they referred to as brides, though in popular culture, they have become to be known as such. In the taking of blood (or exchange, as when a transfusion of Holmwood’s blood temporarily aids Lucy), perhaps Stoker was suggesting a type of husband / wife relationship. Or a perversion of traditional marriage, perhaps.

This much is certain: the sexually suggestive aspect of the vampire that may well be born of the repressed fantasies and insecurities of an Irishment writing in the late nineteenth century certainly finds its most open expression of sexuality in the films of the twentieth.

Filmic versions of the novel definitely suggest Dracula having a sexual relationship with the vampire women. Perhaps it is from the movies that the term “brides” comes. But the vampire women of Todd Browning’s 1931 production are definitely not the source of the label. These vampires are uncredited. And they are more ghostly than provocative. Ethereal. Creepy. Sexual in suggestion. But not in action.

In both DRAKULA ISTANBUL’DA (1953) and Hammer’s HORROR OF DRACULA (1958), the sex is there, but there are not three vampire women. Only one in each of these adaptations. And neither is called a bride.

Valerie Gaunt, in the latter, is credited only as “Vampire Woman.” And though Hammer would go on to make a sequel entitled BRIDES OF DRACULA (1960) — originally scripted under the more appropriate title “Disciple of Dracula” — there are only two, not three, vampire women: Greta and Gina. Over a decade later, Hammer’s SATANIC RITES OF DRACULA (1973) — though bearing the title COUNT DRACULA AND HIS VAMPIRE BRIDE upon its release in America in 1979 — credits not three but four “vampire girls.”

Dan Curtis, of Dark Shadows fame, would reinstate the three brides in his made-for-television adaptation of the novel in 1974, with the three vampire women referred to as “vampire wives.” Close, but not exactly brides. Of course, none of them are referred to as “sisters” either. It is not until 1977’s production COUNT DRACULA starring Louis Jordan that we may have the first instance in film or on television where the vampire women are actually credited as “Brides of Dracula.”

Perhaps more famously, Francis Ford Coppola’s BRAM STOKER’S DRACULA (1992) also refers to the vampire women as brides as the end credits roll. It is in Coppola’s film that the brides are very definitely highly sexualized, and made to appear like women in a harem more than the ghostly figures of earlier productions. Florina Kendrick, Monica Bellucci, and Michaela Bercu are exotic, alluring, and layered deep with eastern-European garb and language.

As for Frank Langella’s turn at the titular Count in Universal’s 1979 “remake,” the vampire women aren’t even there (as it is based upon the Balderston / Deane stageplay).

STOKER, THE STAGE AND MYTHOLOGY

Regardless of how the label “brides” came to be, there’s still the issue of why Stoker chose to call the vampire women “sisters,” or, specifically (for Harker) “weird sisters” in the first place.

Working for the famous actor Henry Irving since 1878, Stoker would have been familiar with his employer’s repertoire ten years on. That year, 1888, saw Irving (who some suggest inspired certain aspects of the character of Dracula) purchase the Lyceum Theater. Among the first of performances was a revival of his Macbeth.

In Act I, Scene 3, the first of the witches that go one to prophesize Macbeth’s rise and fall, asks of the seocond: “Where hast thou been, sister?”

It might be as simple as that. Borrowing from the Bard, Stoker may have been intentionally drawing comparisons of his vampire women to the witches of Macbeth.

And Shakespeare? He most likely drew his inspiration from  Greek mythology: the Moirae — Lahkesis, Atropos, and Clotho — who dictate the destinies of humankind by spinning, drawing out, and cutting the threads of each life.

BACK TO THE POWER OF THREE

None of this is to say that the Greeks, the Bard, or Stoker didn’t subconsciouly make the choice of three women because the number itself holds some sacred or semiotic significance.

Across cultures, the number three is of undeniable importance. That it is applied to a group of vampire women is thus no great surprise. Literary critics have noted numerous supposed subconscious drives that led to Stoker to his choices — including the three vampire women. Whether it is us that only see the connections to the power of three, or Stoker (knowingly or not) who found significance in numbering his “sisters” as such, is immaterial in the end.

It would seem that putting anything together in sets of three is only natural — or supernatural — as the case may be.