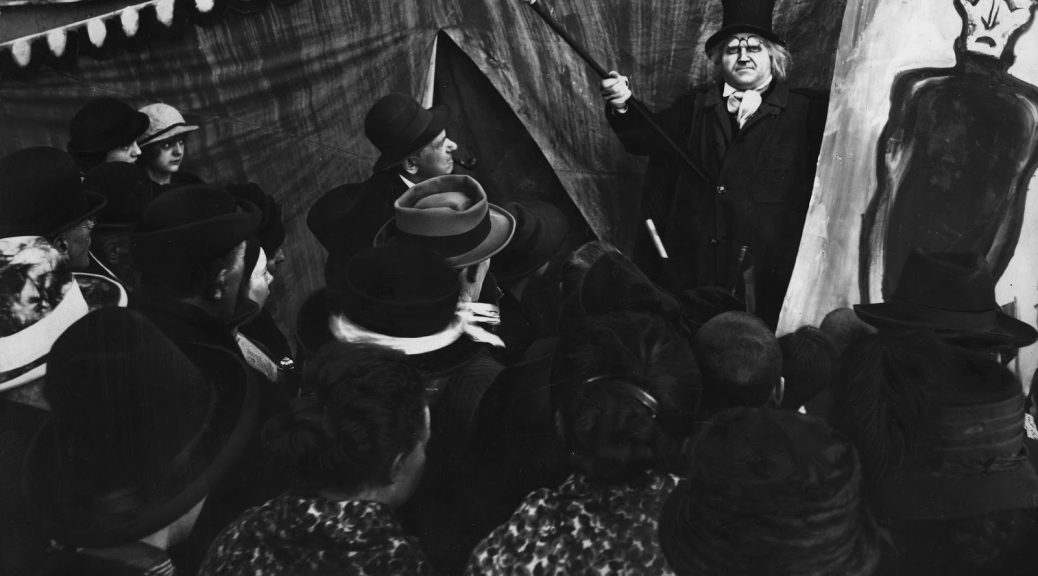 Although the days of the circus and management of their menageries are fast becoming a thing of the past, the carnival or fair coming to town is still something many look forward to and enjoy — especially in summer. That these collections of spectacle and play bring out the kid in many of us is no surprise. What is curious, however, is how often the carnival is depicted in horror movies as places of great danger or dread. And how often a wide variety of filmic tropes are served by a carnival setting.

PULL BACK THE CURTAIN: THE HORROR REVEALED

“Hereinspaziert” (“Step” or “Walk” “Right In”) reads the intertitle as the titular doctor invites onlookers to see the somnambulist Cesare in 1920’s CABINET OF DOCTOR CALIGARI. It’s a beckoning not only to the people at the fair, but also to us, the audience, to witness the sideshow attraction that is the sleepwalker. It is the first time we get to see Cesare, as he emerges from a box on a stage. The importance of the carnival or fair (as it is referred to in the German) is thus made apparent: in CALIGARI, at least, it’s where the horror is first revealed. And in this revelation that the carnival is firmly established as a place where horror dwells. CALIGARI may, in fact, be the first instance in horror films that the carnival takes on such an association.

Jump 1932 and pre-code Hollywood: only two days separate the release of MURDERERS IN THE RUE MORGUE (in theaters February 10 of that year) and the notorious FREAKS (released February 12). In the former, Doctor Mirakle (Bela Lugosi), is both a carnival sideshow entertainer and a scientist: one who exhibits Erik, an ape. In FREAKS (prodcued by Todd Browning, once a carnival barker), the sideshow is front and center.

In both, two common tropes are at work. There is the grotesque, which elicits both our sympathy and fear. Then there is the hand of vengeance — with Erik ultimately killing the mad scientist Mirakle; and the freaks of FREAKS getting revenge: first on Hercules the strongman with whom trapeze artist Cleopatra has an affair; then on Cleopatra herself. Her sin? She not only cuckolds her husband, Hans (Harry Earles), a little person, but also tries to poison and kill him. She mocks the members of the sideshow, and openly humilates her husband. Thus, her internal ugliness is shown as greater than the grotesquery of the “freaks.” Their ultimate revenge is uncomfortable to watch, but we feel for them. These are people, despite their deformitieis. And there is sympathy in the grotesque.

The tropes of MURDERS IN THE RUE MORGUE and FREAKS, however, aren’t present (and may even be inverted) in 1940’s somewhat absurd THE APE. Written by Curt Siodmak (of WOLFMAN fame), THE APE serves up a cruelly treated, sympathetic circus ape as the catalyst that leads to yet another mad doctor (Boris Karloff as Dr. Bernard Adrian) running amok — donning the beast’s flesh to murder townspeople for their spinal fluid. The “ape” is summarily shot in an unsatisfying end, despite a good performance by Karloff.

1944’s HOUSE OF FRANKENSTEIN finds a carnival owner in possession of the skeleton of Count Dracula. Again, it is a mad doctor that forwards the plot. Gustav Niemann (again, played by Karloff) has his hunchback assistant kill the owner, as he then proceeds to remove a stake from Dracula’s heart. Thus resurrecting the vampire, Niemann commands the Count to kill those who had the doctor sent to prison. The hand of vengeance is again at play, only put to nefarious ends. And unlike any other Dracula film, the vampire is first introduced like a waxed figure or horrific diorama on display, reducing him to mere sideshow attraction until he is brought back to life.

Dracula once again surfaces at a sideshow attraction in the much different (and maligned) DRACULA  VS. FRANKENSTEIN (1971) — a movie so bad that it’s good. Here, we find the mad scientist (J. Caroll Nash) working with Dracula to revive the Frankenstein monster in a secret laboratory hidden behind the “Creature Emporium,” a haunted house exhibit located on a boardwalk amusement park. It’s a carnival atmosphere, with some really bad acting with even worse special effects.

Vampires of a different kind — along with a dwarf and a gypsy woman — show up in the traveling roadshow that is Hammer’s VAMPIRE CIRCUS (1972). Here, there are acrobats, actual bats, and even a dancing woman painted up like a hippie tiger. It is a menagerie of characters that serve a somewhat uninteresting revenge plot involving yet another aristocratic vampire (of which we have so many in the genre). But that’s what makes the circus performers much more interesting — as they (literally) take center stage.

In VAMPIRE CIRCUS, all characters other than villagers are truly outsiders — the “other” as such characters are often referred to in psychological interpretations of film. And here, we know from the very title alone that danger awaits the “normal people.” Tying that danger to the circus seems natural. By the nineteen seventies, it would seem the carnival as trope in and of itself was firmly part of the language of film.

WAS IT ALL A DREAM?

What’s overt in VAMPIRE CIRCUS is somewhat subverted a decade earlier in 1962’s CARNIVAL OF SOULS — a film where horror isn’t so much in front of you as it is inside. As possibly the most unqiue film explored in this post — part b-movie and part new wave — CARNIVAL OF SOULS expertly captures the strange dreamlike quality of the carnival. Its plot is essentially the surreal experience of a woman whose car accident finds her frightened and confused, wandering around an abandones carnival. In the same way the angular German expressionist backgrounds of CALIGARI make the carnival much more the stuff of dreams than reality, the sparse sets and eerie quiet of CARNIVAL OF SOULS suggests something born of the subconscious. (So as not to spoil the movie for those who haven’t see it, I’ll leave it at that. Knowing that dreams are involved won’t ruin the somewhat telegraphed but nonetheless satisfying ending of the film.

THE HORROR FILM AS CARNIVAL

Since the silent age, horror films have been carnival-like in and of themselves. Spectacle. Grotesqueries. Thrills. With elements of the circus, the vaudeville, and the burlesque.

From THE CABINET OF DR. CALIGARI to 2014’s AMERICAN HORROR STORY: FREAK SHOW, it is no wonder then that the carnival is a setting used by many horror movies and television shows. Location truly serves the story.

The horror film, after all, is a carnival or sorts. And we are beckoned by trailers, posters, and all forms of publicity to “step right up” and “step right in.”