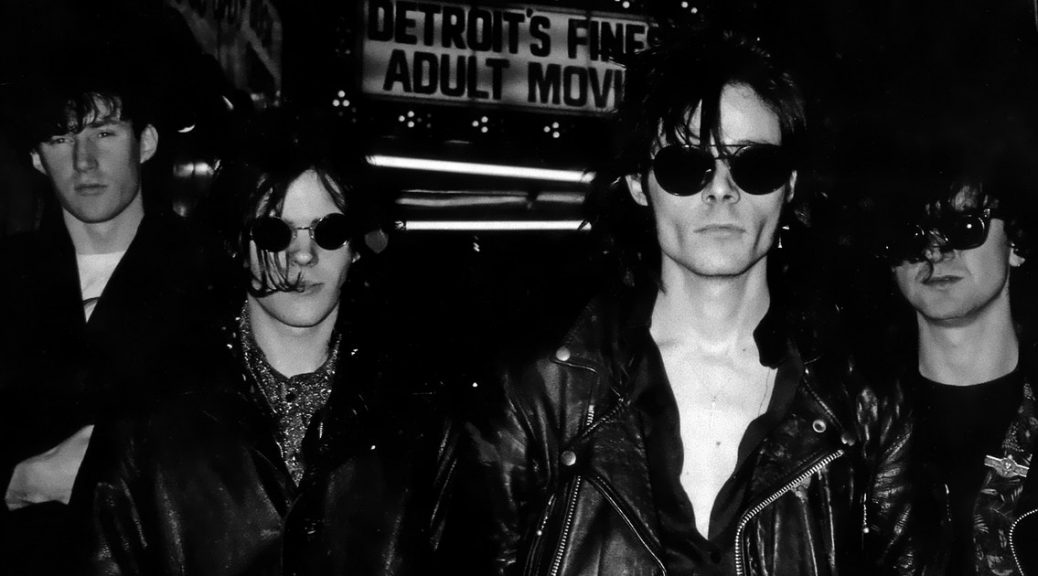 Of all genres of rock music, goth is the most difficult to define. Now fully cemented in popular culture with acolytes sporting black clothes, blacker nail polish, and the blackest of lipstick, the movement was not so well defined in the late seventies and early eighties when the term began to be applied (by critics mostly) in the wake of punk. Coined by rock critic Critic John Stickney long ago in 1967 when describing a Doors show, goth was seemingly first applied to bands most associated with an atmospheric, gloomy, even angular sound late in the nineteen seventies; see, for example, Nick Kent’s “Banshees make the Breakthrough” in his 1978 review of Siouxsie and The Banshees in NME. Indeed, it is Siouxsie and the Banshees, The Cure, Bauhaus — and some say even Joy Division (labeled by their producer, Martin Hannet as such in 1979) — that are thought of as the pillars of early goth music. And then there is The Sisters of Mercy. More specifically, its frontman (and only constant member), Andrew Eldritch, who has famously resisted the label — even outright rejected it.

Formed in Leeds in 1980, The Sisters of Mercy are known for Eldritch’s melancholic baritone, driving bass lines, sharp guitar riffs, and beats supplied by Doktor Avalanche — a drum machine that has been, for the most part, the only constant member of the band other than Eldritch. At first, only singles and EPs were released from the band. Notable among them is the 12″ single for “Alice,” a lament for a girl addicted to pills. It is on this release that a cover of The Stooges’ “1969” — a staple of the band’s set from the very beginning — appears.

In “1969” is found not only one of the band’s key strengths, but also a possible clue as to the motivations of its members to consciously NOT be goth: that is, a desire to honor a wide range of musical styles with their own distinct sound. Eldritch’s deep, reverb-heavy vocals. The synthetic beats of Docktor Avalanche. Guitars that are mesmerizingly fuzzy. The Sisters of Mercy’s cover of The Stooges’ anthem of dillusion and disaffected youth sounds more like a garage band on amphetamines than it does a gothic rock dirge.

Curiously, The Sisters of Mercy turned out many a colorful cover: Dolly Parton’s “Jolene,” The Rolling Stones’ “Gimme Shelter,” and Hot Chocolate’s “Emma” among them. That these songs are all dark in tone contribute to an understandable goth label, but they are each faithful insofar as Eldrith’s voice allows — and are possibly even  a bit tongue-in-cheek, with the band realizing the unique juxtaposition of music like theirs covering such a wide-range of genres (proto-punk, country, classic rock, even soul).

In an interview in a magazine called Under the Rock — dedicated to all things Sisters of Mercy” — Andrew Eldritch once famously said “I’m not interested in what goths think,” adding that it was journalist David Dorrel from NME was “a prime originator of the “‘Sisters are goth and therefore crap’ smear.” Eldritch goes to humourously say “I’m constantly confronted by representatives of popular culture who are far more goth than we, yet I have only to wear black socks to be stigmatised as the demon overlord.”

Still, it’s hard to deny that by the time of their first official album, “First and Last and Always” (1985), songs like “No Time to Cry,” and “Nine While Nine” are hard to describe in any other way than atmospheric and gloomy. “Marian (Version)” alone finds the singer driven along by a quasi-siren song to a watery grave. Yet the apocalyptic “Black Planet” was accompanied by a video that showed the band crusing California on a sunny day in, of all things, the Mokeemobile! If this was goth, its video, at least, eschewed the darker aspects of the band’s image.

Floodland (1987) would find Eldritch developing a more epic sound, full of booming eighties production (e.g., “Dominion / Mother Russia”) and a semblance of pop sensibiltiy on tracks like “This Corrosion” and “Lucretia, My Reflection.”

By the time of the band’s  third album, “Vision Thing” (1990), an all-out hard rock assault is apparent in songs like the titular track, “Detonation Boulevard,” and “More.”

Still together (insofar as Eldritch assembles musicians to go out on tour every few years), the Sisters of Mercy have never released a fourth album. Problems with their record company famously turned Eldritch against the industry. Instead, he has focused over the years since on performing live.

After all is said and done with Sisters of Mercy, it is curious to note that practically no early influential post-punks bands particularly like the goth label (see this great reddit post). But why? The simplest answer is that it is reductive, lumping bands with a wide-range of styles into one camp (that is, appropriately enough, often campy). Goth carries a stigma of being a one-trick-pony of sorts: with tired themes and funereal beats. The wide berth given to most other genres is just not open to bands labeled goth.

As for modern goth, the music has splintered further with its labels of death rock, cold wave, dark wave, even ethereal wave.

Bands like Cold Cave, Drab Majesty, and Dark seem to embrace the association of their music with all things sad and scary, morbid and taboo.

In that regard, artists like Andrew Eldritch and his Sisters of Mercy need not even be concerned with labels. The world has moved on. Other artists have picked up the all-black flag (not to be confused with the eighties American Hardcore band) and run with it into the cemetery as the sun sets and the leaves fall.

In the end, it’s all rock and roll, and that’s the landscape where The Sisters of Mercy should ideally find their place. The Cure’s relatively recent induction into the Rock and Roll Hall of Fame has legitimized music (fairly or not) labeled goth, and The Sisters of Mercy may one day be judged not by the doom and gloom of their music, but the unique sound that made them stand out from the crowd.