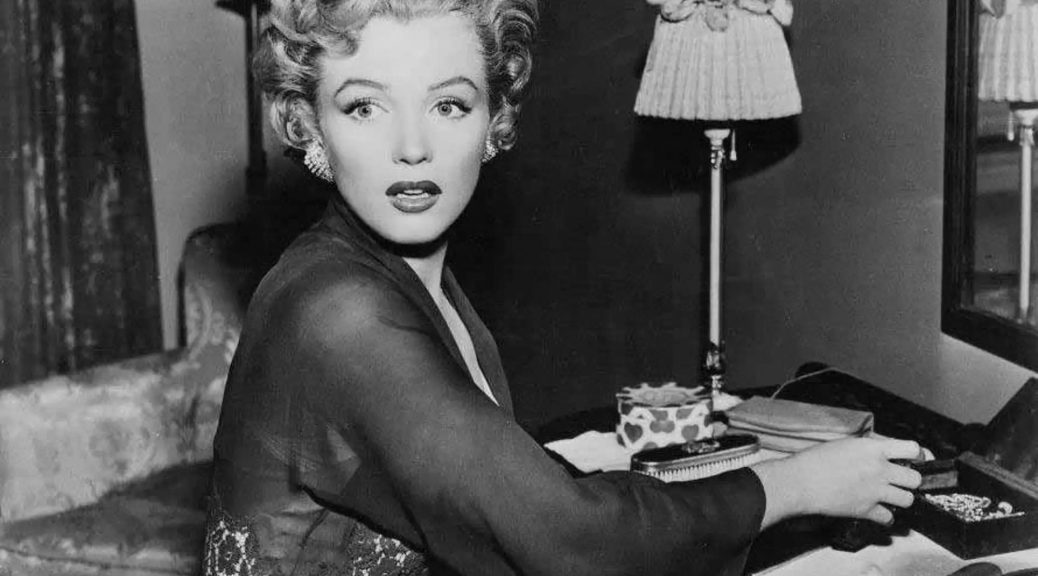 Although best known for her roles as bubbly blondes in films like GENTLEMEN PREFER BLONDES (1953), THE SEVEN YEAR ITCH (1955), and SOME LIKE IT HOT (1959), Marilyn Monroe made a number of movies that ran counter to that caricature. Curiously, a few of them are film noir — a genre rarely associated with the icon. Playing a small part in 1950’s heist film THE ASPHALT JUNGLE, it is DON’T BOTHER TO KNOCK (1952) and, more notably, NIAGARA (1953), where Monroe really shines as shadowy, complex characters in very dark tales.

Having made a dozen or more movies by the time she was given the starring role as unbalanced babysitter in DON’T BOTHER TO KNOCK, Monroe was best known for bit parts in comedies, musicals, and light dramas. It wasn’t until 1950’s ASPHALT JUNGLE that she began to be noticed as potentially more than a pretty face (“The picture that first brought fame to Marilyn Monroe,” read one poster). Mistress to a lawyer who acts as “fixer” for a heist gone bad, Monroe has few lines in ASPHALT JUNGLE, but the role established her as a character actress who could play something darker than the parts she had previously been given.

In CLASH BY NIGHT (1952), another, less memorable, film noir, Marilyn had a rather small part (as girlfriend to main character Mae’s [Barbara Stanwyck’s] brother. But the film itself was overshadowed by the publicity of being shot while the nude calendar photos of Monroe surfaced (which proved a boon to ticket sales). Suddenly, she was more of a star than ever, with some theater owners putting Marilyn’s name above Stanwyck’s on the marquee.

One month later, she would truly earn top billing in her first real breakout role: Nell, the unstable babysitter in DON’T BOTHER TO KNOCK.

EVERY BIT AN ACTRESS

With DON’T BOTHER TO KNOCK, Fox Studio head Darryl Zanuck wanted to sell Marilyn as a serious actress. But the studio had its cake and ate it too with the way it sold the picture. “Every bit a woman… every bit an actress,”  is how the pressbook read. Fox knew they had a hot property, but weren’t sure what would best work for the actress. But Monroe knew she wanted to be taken more seriously, and the noir themes of the picture appealed to her.

What is film noir? To borrow from Supreme Court Justice Potter Stewart’s comment on obscenity, “I know it when I see it,” film noir is part genre, part style, and often open to interpretation. Its themes of guilt, disillusionment, greed, anger, loss, and misery are often played out by the lowest of the low in society: thieves, con men, killers, down-on-their-luck average Joes (and Janes) who but for one fatal mistake wouldn’t find themselves in the predicaments they are in. There are cops, detectives, loose women, and hardened criminals. Plots play out with lots of violence and sexuality (both of which were skillfully handled post-code), misogyny, betrayal, and cold, calculated murder. Visual styling and low-key lighting make grim and gritty locations all the more sinister. And someone usually ends up dead.

Additionally, many film noir movies suggest that their characters suffer some sort of defect or flaw in their character. And some come right out and tie lead characters to mental illness: depression, anxiety, even post-traumatic stress disorder.

Some form of mental illness is obvious in Monroe’s portrayal of Nell in the low budget, psychological thriller that is DON’T BOTHER TO KNOCK.

A troubled babysitter — whose initially innocent evening of caring for a couple’s daughter at a hotel where her parents are celebrating at a gala in the lobby — Nell (Monroe) unravels as the film progresses, desirous of donning the clothes and jewelry of the mother as she develops fantasies about the man in a room across the courtyard. Played by Richard Widmark, Jed is just a guy who doesn’t take life and love too seriously, having been dumped for a lack of empathy by his girlfriend, played by Anne Bancroft (in her first role). His flirtation with Nell leads to her conflating their relationship in her mind, filling a void left by a lost love. In the course of trying to keep Widmark as a suitor, she abuses the girl in her care, knocks out her uncle (who is her surrogate parent), scares the older neighbors (surrogate grandparents?), and, ultimately, struggles with her charge’s mother in effort to her her fantasy intact.

It’s a stellar performance by Monroe (in a movie that is otherwise a bit reductive in its treatment of mental illness). Solid suspense — with great performances. There’s a sense that at any moment, something could go terribly wrong: violence, even murder. Its plot builds dread, leading the audience to believe that someone could, indeed, get themselves killed because of Nell’s delusions. A dark film, definitely. Film noir? It’s been since been considered by critics as one — albeit an odd entry in the genre.

Upon release, DON’T BOTHER TO KNOCK was a commercial failure. Zanuck was concerned that Marilyn’s next film — where she would fully embody the femme fatale — would likewise be a flop.

Quite unlike the timid, tortured Nell, Marilyn’s character in NIAGARA (1953) is the perfect noir villain: Rose Loomis. The unhappy wife of Korean War vet George Loomis (Joseph Cottom), Rose is the film’s central figure, and Monroe its star.

Plotting with her lover, Rose plans for her husband to die in a tunnel beneath the falls. Does she succeed in getting rid of him? That question propels the plot, and the backdrop of Niagra Falls provides a dramatic setting for what becomes a none-too-perfect murder.

Whereas Nell acts on impulse, Rose carefully schemes. It is a colder, more seductive role for Monroe, and perfect noir settings (walkways shrouded in mist, the turbulent rush of the falls) make for effective backdrops in what would be Monroe’s only true turn as femme fatale.

The moment she is introduced in NIAGARA, Rose has the dual air of a woman sweet, yet seductive — even sinister. The innocent couple who become inexorably entangled in Rose and George’s troubled marriage don’t quite know what to make of Rose when they first meet her, and neither do we. That’s the power of the femme fatale. Alluring and luring.

“Flaunting her charms as she lured men on and on to their eternal destruction,” says the voice over in one of the film’s trailers. Quickly becoming a full-blown femme fatale in a scene that find Rose requesting the record “Kiss” (a song that George suspects has secret meaning) Monroe is at once a woman desired and suspect as she sings along, emphasizing certain words that lend the song a sense of foreboding. Does she drive men crazy? Is she dangerous? That is the character trope of the femme fatale.

And, like many femme fatales, Rose is the catalyst for calamity.

NIAGARA may be quite unlike most film noirs is that it was shot in 3 strip technicolor. But the saturated scenes serve the film well in establishing its fantastic locations as more sinister than serene. Rose’s fushcia dress alone would not have had the impact it does in black and white. Neo-noir? Though that term is usually used by critics to refer to noir films after 1959, it suits NIAGARA. A dark toned — if bright colored — technicolor film.

Despite the success of NIAGARA, Zanuck still didn’t know what to do with his star. Famously, director Howard Hawks talked Zanuck into taking Monroe’s sex appeal and playing it for laughs.

For Marilyn, being cast solely in such roles surely shook her confidence in herself as a legitimate actress. As reported in an LA Times article, Don Murray, her co-star in 1956’s BUS STOP, said “she was trying to prove she was a serious actress and not just a movie star playing bimbo parts.” Still, she received some critical acclaim for her role as Chérie, the chanteuse from the Ozarks who wants to be a Hollywood star.  As noted by Donald Spito in his excellent biography of Marilyn Monroe, Bosley Crowther of The New York Times (a long time fan of Monroe), in his review of BUS STOP, wrote “Hold on to your chairs, everybody, and get set for a rattling surprise. Marilyn Monroe has finally proved herself an actress.”

Still, the lighter roles continued: a superb comedic performance as Sugar “Kane” Kowalczyk in Billy Wilder’s SOME LIKE IT HOT (1959) followed by the musical comedy LET’S MAKE LOVE (1960).

It wasn’t until 1961 and John Huston’s THE MISFITS that Marilyn would really get the chance to show off her talent as a serious actress again. Her final finished film, it was a commercial flop upon release. Written by Arthur Miller, THE MISFITS proved a difficult production — with the breakup of her marriage to Miller, and her abuse of alcohol and prescription drugs. A little over a year later, she would be dead.

Marilyn Monroe will forever be a pop culture icon. Photos of her are known the world over. But in recent years, there been a rediscovery of Monroe’s work with critical acceptance that she, indeed, had talent as a dramatic actress.

TCM regularly shows many movies from her filmography, and arranges its website in such a way that it is easy to take a deep dive into her films like her film noir classics DON’T BOTHER TO KNOCK and NIAGRA.

Also check out TCM’s “Noir Alley,” every Saturday night at midnight ET, where DON’T BOTHER TO KNOCK was recently featured.