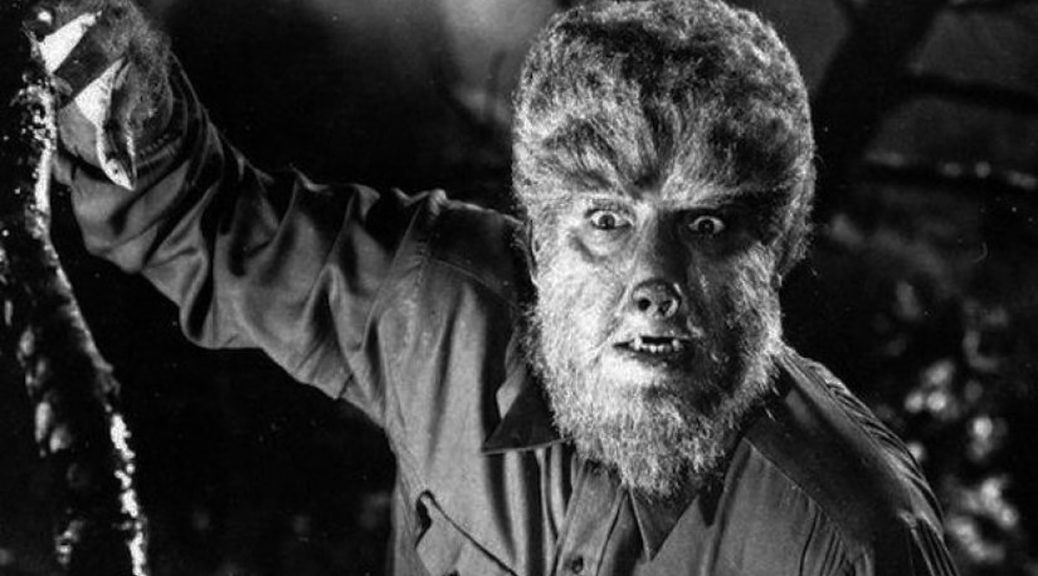 Unlike that of its close cousin, the vampire, the mythology and folklore of the werewolf was not that well developed until it found its way to the silver screen. Although stories like the Beast of Gévaudan were well known in the eighteenth century, and books like Sabine Baring-Gould‘s treatise on werewolves were popular a hundred years later, the werewolf, as we have come to know him, does not have as rich a history as the vampire does. Not until movies came along.

Stories of werewolves existed as far back as the ancient Greeks; and Europeans in the Middle Ages were witness to many werewolf trials (most notably Peter Stumpp in 1589). But there exists no real lycanthropic equivalent of Dracula (Guy Endore’s 1933 Werewolf of Paris comes close, as does the little known, but popular at the time, The Were-wolf, by Clemence Housman [published in 1896!]). Though both creatures were the stuff of eighteenth century hysteria, the distinctions between vampires (the dead who could sometimes turn into wolves) and werewolves (the living who were transformed into animals) were not always so clear.

Even in antiquity, legends of the vampire and the werewolf would often intertwine, making much of their mythology difficult to separate. Selene, the Greek goddess of the moon and it cycles, for example, is thought to have made the first vampire, Ambrogio; but Selene is also a moon goddess, often depicted in art with wolves by her side. The myths go back further than the Greeks, of course. Babylonians had their shapeshifters and bloodsuckers. As did the ancient peoples of Asia and South America. Yet the man who transforms specifically into a wolf is almost uniquely European. Usually, the devil or a witch is involved. And a burning at the stake or turn on the wheel usually took care of them.

But the origins of silver bullets as being the primary way to kill werewolves? Or metamorphosis dependent on the cycles of the moon? The origins of these are murky. Even the anthropomorphic werewolf itself is more the stuff of Hollywood than anything that came before.

Silver has always had magical, even religious properties of purity. It has certain antimicrobial properties, making it a useful ingredient in early medicines, or simply make for a good pitcher that would keep water cleaner, longer. Alchemists valued it. As did artisans.

The origin of the belief in the power of silver bullet to kill supernatural monsters may date to  17th century stories of the city of Greifswald, Germany where silver buttons, buckles and other items were melted down to forge bullets to kill the creatures. This comes to us from J.D.H. Temme’s Folk tales of Pomerania and Rugen, written in 1840. But outside of only a few obscure scholars who reference this material infrequently over the next hundred years, history does not readily fuse the scourge of the werewolf with the power of silver.

Though the Beast of Gévaudan is reputedly killed by a silver bullet, modern scholars argue it is only through much later translations of the story —most notably Henri Pourrat’s novel Histoire fidèle de la bête en Gévaudan, written in 1946 — that a silver bullet is introduced as killing the beast.

That is five years AFTER Universal releases The Wolf Man in 1941— the first film to truly attempt to use some semblance of European folklore to tell the story of a cursed man.

Written by Curt Siodmak, The Wolf-Man was originally entitled “Destiny.” Siodmak saw in his cursed anti-hero a metaphor for the writer’s own flight from the horrors of Nazi Germany. And without knowing it at the time, he ended up influencing the mythology of the werewolf more than any historical or literary source before him.

Not that there weren’t a few werewolf films that had preceded Universal’s classic.

The earliest of record is lost to us. 1913’s silent The Werewolf  was the first to tie the legend to Native American beliefs, but because of the prints being destroyed by a fire in 1924, few would have remembered it. From the records that do exist, there is no mention of transformation due to the moon, or destruction by a silver bullet. A 1924 silent film also called The Werewolf should have been lost; it’s a terrible piece that suggests a surly drunk is like a man who has become a wolf.

In 1935, Universal first tried the theme of a man transforming — not into a wolf — but a wolf-like man. Courtesy of the makeup artistry of Jack Pierce (of 1931’s Frankenstein fame), the anthropomorphic change was effective — to an extent. In this Werewolf of London, actor Henry Hull did not want his face fully covered, and the result was more Dr. Jekyll and Mister Hyde than anything else. And his is dispatched in an anti-climatic way. The werewolf is killed by an ordinary bullet.

Indeed, it is in The Wolf-Man that Siodmak introduces and/or fuses so much of what we now accept as gospel when it comes to werewolves. First, they are not so much actual wolves as they are toothy hirsute men (well, Lon Chaney, Jr. at least). Secondly, silver — in the form of a silver-headed walking stick — dispatches the creature more effectively than any traditional weapon.

But it is not silver alone and a bipedal creature that Siodmak somehow turned into modern mythology. One of his biggest contributions to werewolf folklore was the influence of the moon.

1941’s The Wolf-Man is famous for its now well-known poem:

Even a man who is pure in heart
And says his prayers by night
May become a wolf when the wolfbane blooms
And the autumn moon is bright.

Recited by many characters in the film, the four line poem is an ever-present refrain in the picture. But its last line makes one wonder. Did Siodmak only intend for a seasonal moon to set off the lycanthropic transformation? Is it, as Chaney’s love interest, Gwen, puts it, a transformation “at certain times of the year.”

It would appear in The Wolf-Man, that phases of the moon factor little into Lon Chaney’s problem.

Universal would soon, however, add to the mythology. In the first of many sequels  — 1943’s Frankenstein Meets the Wolf-Man,  written by Siodmak — the line had been changed to “And the moon is full and bright.”

Some believe the change to a full moon was made to account for Chaney’s resurrection: it was under the light of the full moon, after all. Chaney would go on to play the monster a total of five times, and the the moon became ever more important to the plot of each film. The altered poem was recited in each, with the exception of House of Dracula and Abbott and Costello Meet Frankenstein.

The connection between werewolves and the moon has been part of the lore ever since. The fuller, the better, apparently.

Exactly what form the werewolf takes is another matter entirely. Peter Stumpp, for example, was said to take on lupine shape. Bipedalism — or a more anthropomorphized shape — does not seem to come into the picture until Henry Hull does his wolf-man Jekyll / Hyde transformation in 1935. Whether this was a matter of practical effects and/or problems with animal control is unknown. What is clear is that by the time of The Wolf-Man, the title itself makes clear that what we will see is, indeed, a man.

The werewolf as wolf-MAN carried well into nineteen fifties’ cinema. See, for example, 1957’s popular I Was a Teenage Werewolf —where actor Michael Landon’s creature looked like Chaney’s with a pompadour. Or the little known (for good reason) The Werewolf, from 1956. Neither movies are particulared good.

But then, as with many traditional monsters, where Universal left off, Hammer films in the UK took over. Among the best of the genre is Hammer’s Curse of the Werewolf (1961). The nearest adaptation to Guy Endore’s novel, Curse is steeped in the modern cinematic werewolf mythology. Oliver Reed’s werewolf bears a human visage, and walks on two legs. The moon is responsible for his transformation (it’s even on the promotional posters!). And he is ultimately dispatched with not only a silver bullet — but one blessed by a priest!

Audiences of the nineteen sixties and seventies would come to expect their werewolves to follow now established genre norms. Most of the elements come together, for example, in 1974’s The Beast Must Die.

Most. Not all. For in The Beast Must Die, the threat definitely comes on all fours.

John Landis’ An American Werewolf in London (1981) is the first film to (more than) effectively show a man transform into an actual wolf. Effects master Rick Baker’s Academy Award winning makeup shocked audiences. The practical effects transformation of man to wolf looks real, and really painful — all to the tune of “Blue Moon.” The age of men in hairy masks was over.

That the wolf in American Werewolf is killed in an alleyway in a hail of regular-old police bullets is also telling. That it was released in 1981, the same year as two other genre-defining werewolf films — The Howling  and Wolfen — showed that by the nineteen eighties, the folklore and mythology of werewolves were further being explored — defined even — by the films themselves, and not some literary or semi-historical antecedent. An American Werewolf in London honored traditions of the genre with healthy doses of humor. The Howling (with an equally impressive but radically different practical effects transformation courtesy of Rick Baker’s assistant Rob Bottin) took the monsters off of the moors and put them in hippie communes. And Wolfen, which only hinted at lycanthropy, suggested that its wolves were transmogrified Native American souls.

Each of these seminal films from 1981 could be considered a deconstruction of the genre.

Films that would follow in decades to come like (one of the few nineties’ entries) Bad Moon (1996), the excellent Ginger Snaps (2000) and the brutal Dog Soldiers (2002) would further play with genre conventions.  And if the release of films like Late Phases in 2014 are any indication, filmmakers will be sinking their teeth into these stories for years to come.

Even Universal returned to the story with a remake of The Wolf-Man in 2010 (to mixed reviews). CGI had, for better or worse, been added to the attacks and transformations, but many of the genre conventions established seventy years earlier remained relatively intact.

In the end, 1941’s The Wolf-Man may stand as the best of werewolf films — if only because it influenced everything that came thereafter. In that regard, writer Curt Siodmak achieved what most storytellers only dream of: the chance to have a character become part of modern mythology.

For more on lycanthropy, moon madness, and a brief history of werewolves, see my own “The Moon Howls” elsewhere in this blog.