Despite stilted dialogue, atrocious acting, and, at times, a nonsensical script, 1971’s The Velvet Vampire is an oddly enjoyable vampire film. And notable, too, as it was directed by a woman — at a time when exploitation films usually relegated women to just one side of the camera.

Its director, Stephanie Rothman, was the first woman to be granted the Directors Guild of America fellowship, a prestiguous award given to a student director. She became an assistant to Roger Corman in 1964, and is primarily known for the cult classic The Student Nurses in 1971.

Also released in ’71 was The Velvet Vampire. Directed and co-written by Rothman, Velvet Vampire is the story of a California couple (actors Michael Blodgett and Sherry Miles) invited to spend the weekend at the desert estate of sun-shy Diane LeFanu (Celeste Yarnall). As LeFanu begins to seduce the couple, we learn she is a century’s old vampire pining for her dead cowboy husband while splitting her time between voyeurism and dune-buggy rides. If it sounds silly, it is. But hang on, it gets sillier: the ending (SPOILER) inexplicably finds total strangers outside of a bus station grabbing crucifixes to help the heroine immobilize LeFanu and destroy her by sunlight (despite her only having to otherwise wear a hat, apparently, to avoid such a death earlier in the film).

What it lacks by way of script, The Velvet Vampire is redeemed by artful sequences of seduction that are part dream and part hallucination — more in line with European art-house films of the time than straight-up sex and violence exploitation flics (with which this movie fell into distribution [and subsequent financial failure]). It probably didn’t help that numerous other vampire films were released around the same time. Hammer Studios had released Lust for a Vampire in 1971. Count Yorga returned that same year in the aptly named The Return of Count Yorga. Jean Rollin released his third vampire movie in 1971: Le Frisson des Vampires. Spain gave us La Noche de Walpurgis (released in the U.S. as The Werewolf vs. The Vampire Woman). And Germany, not to be left out, entered the already crowded vampire market with Gebissen wird nur nachts (U.S. Title The Vampire Happening). All in 1971.

One particularly effective dream sequence finds the husband lured from the comfort of his wife (and brass bed) to tread on desert sand, pulled by the vampire who, in flowing red gown, is literally in a tug-of -war with the wife.

In this regard, Rothman upends the trope of the female victim for an inversion of straight dynamics where the female vampire, as oppossed to a male (in, for example, Dracula films), holds all the power — over men and women; the only real threat comes not from a Van Helsing, but from another woman (who, despite being a “dumb blonde” character, manages to figure out how to escape, and ultimately destroy the vampire by film’s end). There is the suggestion of lesbianism, but it would seem Rothman is more concerned with pushing female empowerment than exploring sexual identity.

In a 2008 interview with UCLA’s CSW Update Newsletter, Rothman talks about The Velvet Vampire, the limitations of the genre, the expectations of distributors of exploitation films, but also a certain degree of freedom that, in hindsight, critics have come to see as art. She says:

“The freedom that existed [with The Velvet Vampire] was the freedom to take what were the genre expectations and do unexpected things with them. Do things that would make them seem relevant to a wider audience than the usual fans of exploitation films. So we included political opinions and we tried to make the stories have more psychological depth. We tried, given the restrictions of the genre, to address some ideas that were ignored by Hollywood and by most other films made at that time.”

Indeed, it is sexual dynamics and the psychology of seduction that most modern viewers (at least those with an open mind that can ignore some of the silliness) come away with after viewing the film. But Rothman, weighed down by a sexist system that raised up many of Corman’s other acolytes (Francis Ford Coppola, Martin Scorsese, Jonathan Demme, and Peter Bogdanovich, to name just a few), was never given the opportunity to break out like others and make major motion pictures. Her final directorial credit was The Working Girls, released in 1974.

Unlike Alice Guy-Blaché (whose The Pit and the Pendulum (1913) may have the distinction of being the first “horror” film ever directed by a woman [from the first woman director!]), Rothman — and others like her trying to break through the glass ceiling of cinema that had built up in the years following silent film — were rarely given a chance. There are some: Barbara Loden, Elaine May, and a handful of others whose films of the early seventies were critically acclaimed. But they are exceptions to the rule. In the end, Rothman was stigmatized by the type of films she made — an irony that the trend toward exploitation in the seventies that got her started also prevented her from developing into the kind of filmmaker for which she clearly had the ambition and talent.

In a 2008 interview from Interview Magazine, Rothman cites an example that demonstrates why her career as a director was so short:

I couldn’t get any work…  When it came to feature films, I was once invited by an executive at MGM to go and meet her, which was in the days when there were very few female filmmakers at all… she said to me, “…We’re getting a new script ready for a first time director who we want to use and we were talking about the fact that we would like it to be a vampire film. Something, you know, like The Velvet Vampire that Stephanie Rothman made.” My response when I heard that was, “Well, if you want a vampire film like Stephanie Rothman made, why don’t you get Stephanie Rothman?”

Exploitation flics and genre pics boxed Rothman in. Still, The Velvet Vampire shows what could have been. And, on its own, it is a curiosity in the then (and still) crowded market of vampire films.

In his 1839 novel Hyperion: A Romance, Henry Wadsworth Longfellow has a character quote “a Chinese proverb” that reads “a single conversation across the table with a wise man is better than ten years mere study of books.” I suppose that likewise applies to a blog. For in the ten years that I have been writing Vault of Thoughts, I wonder if anything I have offered to the world by way of written ruminations approaches the quality of the best of conversations.

For what they’re worth, here are my top ten posts. They are taken from a blog that I am proud to say has logged a little over 300,000 total views during its decade on the web. 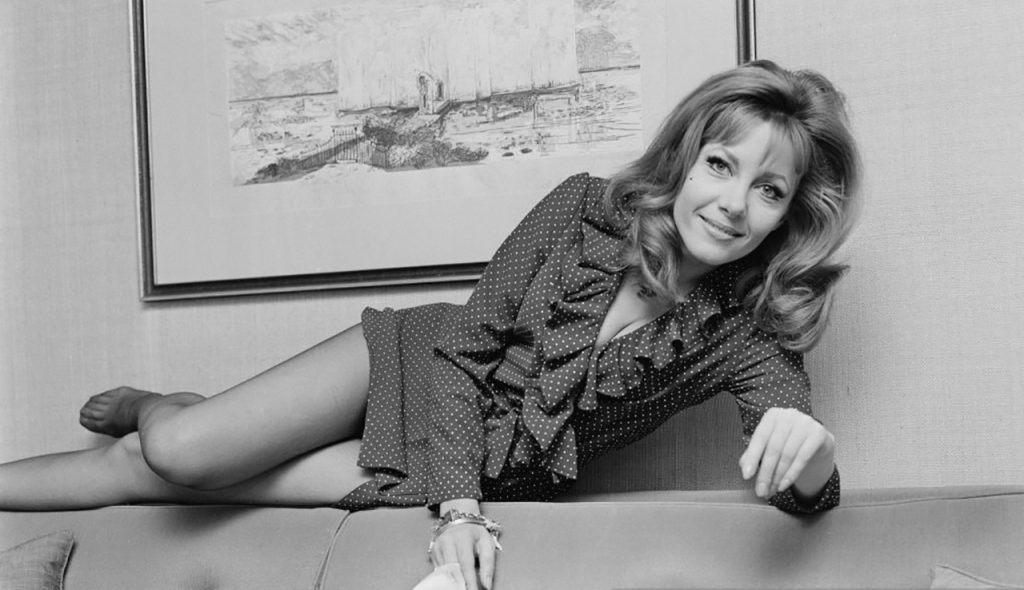 Be they vampires, victims or Victor Frankenstein’s most ambitious creation,  actresses that appeared in movies from Britain’s Hammer Studios were unlike any other women in the history of genre films. So many others must feel this way as it continues to top the list of my blog posts ever since it was published in May of 2018. It even attracted an artist from Germany named Kolja Senteur to seek me out to write the English introduction to his illustrated book Heroines of Hammer (click here for cover image, kindly provided by the artist). Click here to read post. 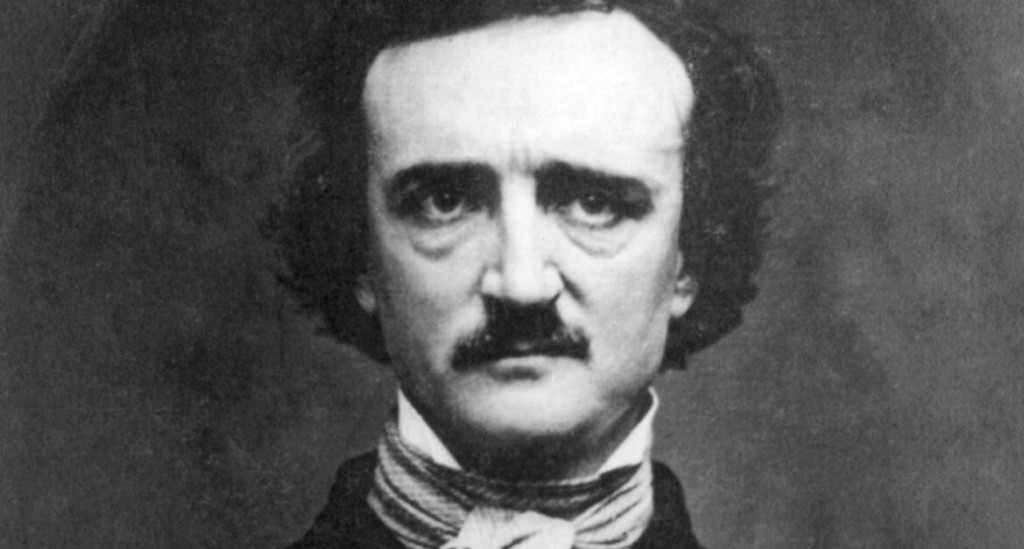 “Constitutionally sensitive,” Edgar Allan Poe arguably suffered from type 2 diabetes. You can see it in his face. I argue as much in this post from early in the blog’s history (April, 2012). And while I am not the first to posit this theory, I may have been among the first to show the progression of the condition in photos. Click here to read post.

3. PRE-CODE HOLLYWOOD: MURDER, PROSTITUTION & WHAT IT’S LIKE TO BE GOD

With sex, violence, and a man who dared defy God, motion pictures of the nineteen-twenties and early nineteen-thirties were not the glory days of wholesome family values. In this post, I examine a number of films that were scandalous in their day, and look at the history of what is now known as “pre-code” cinema. Click here to read post.

4. TATTIE BOGIES, KUEBIKO AND FEATHERTOP: THE SCARECROW OF FOLKLORE AND FICTION 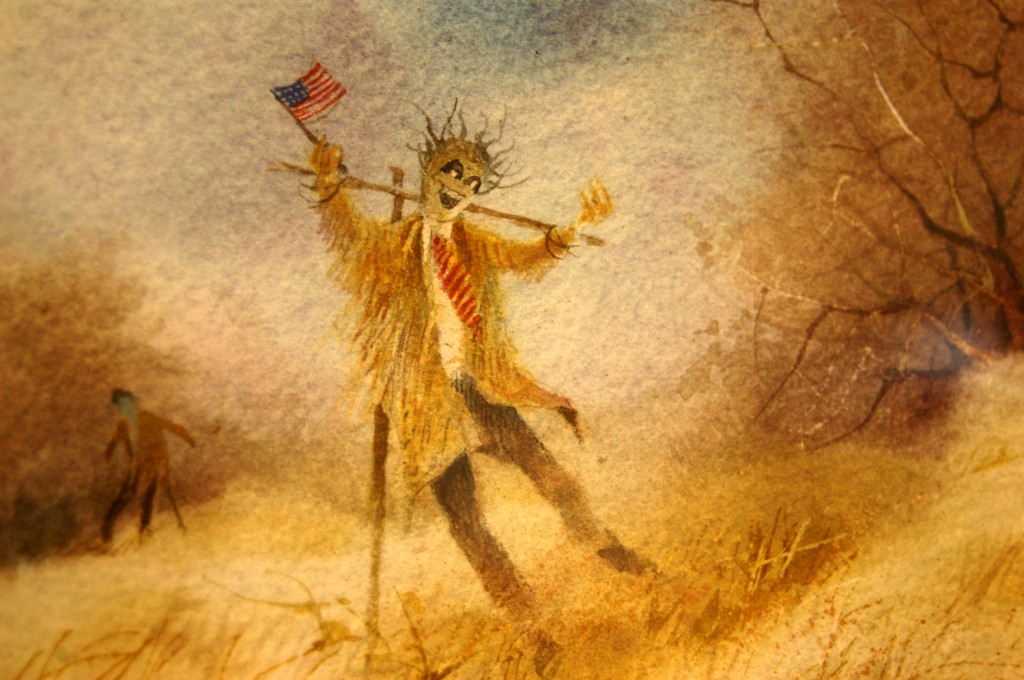 Known as bootzamon to German settlers and Tattie Bogies to the Scots, scarecrows, culturally if not etymologically, have long been tied to the supernatural. This post looks at some scarecrows in fiction, and quotes artist Win Jones, whose painting served as the feature image (it is one of the only feature images on my blog to be kept as color to maintain its integrity). Click here to read post.

5. UNMASKING THE PHANTOM: ROMANTICIZING THE FACE OF HORROR 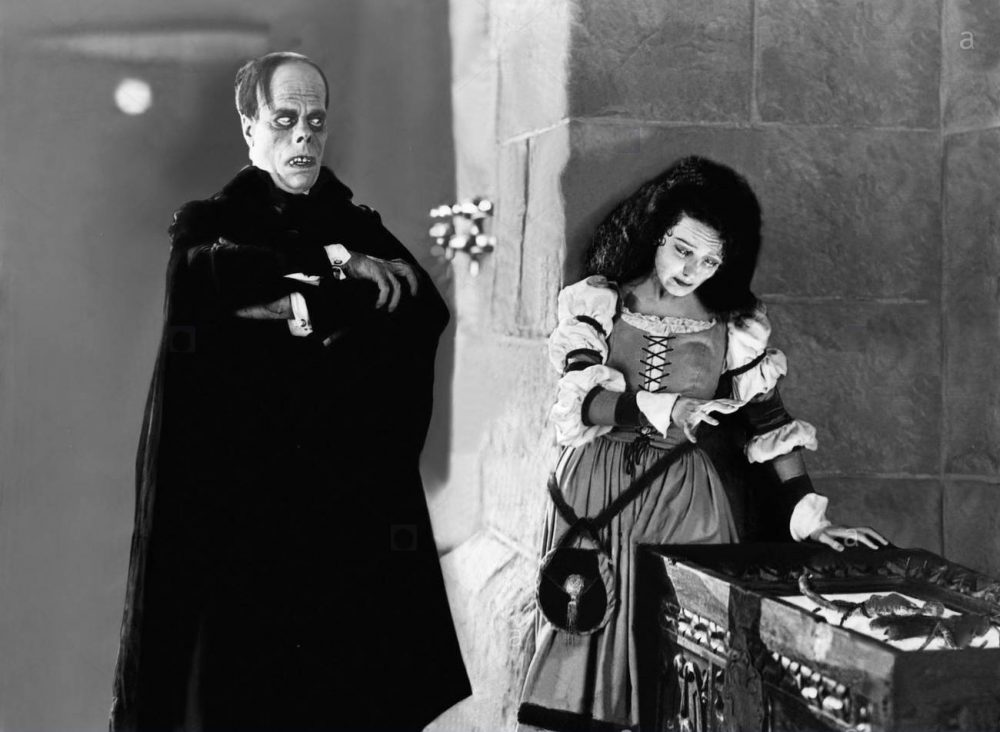 Why do fans of Gaston Leroux’s 1910 novel, The Phantom of the Opera — and its many adaptations from stage to screen — romanticize the sinister? Apparently, more than a few people were interested in my answer in this post that ended up as 5th most popular on my blog over the past ten years. Click here to read post. 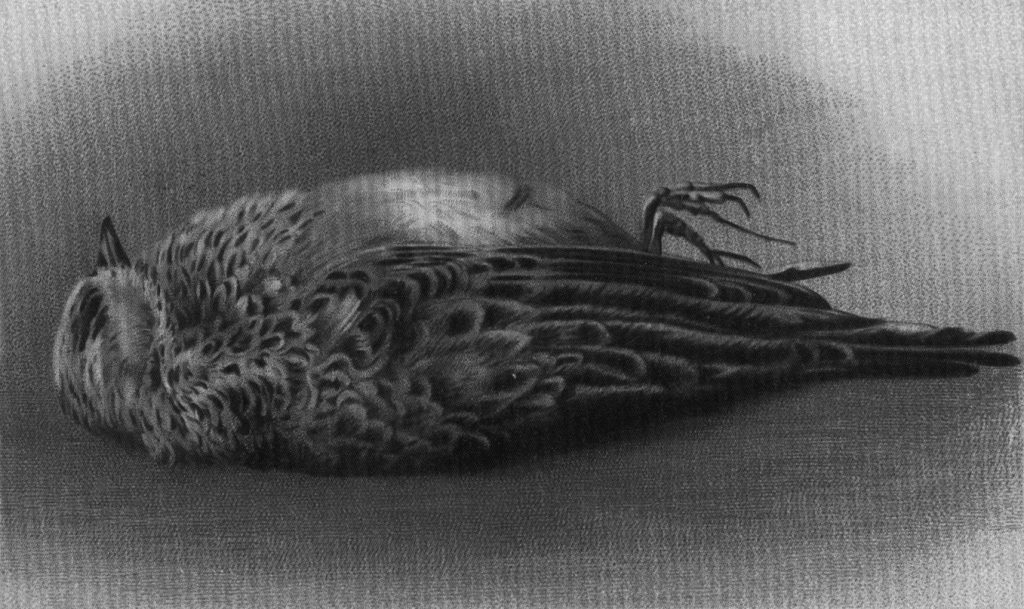 I tend to always write a post at Christmas. And this entry from 2016 was one of the most popular. Check out these Victorian Christmas cards that just SCREAM Merry Christmas! Click here to read post. 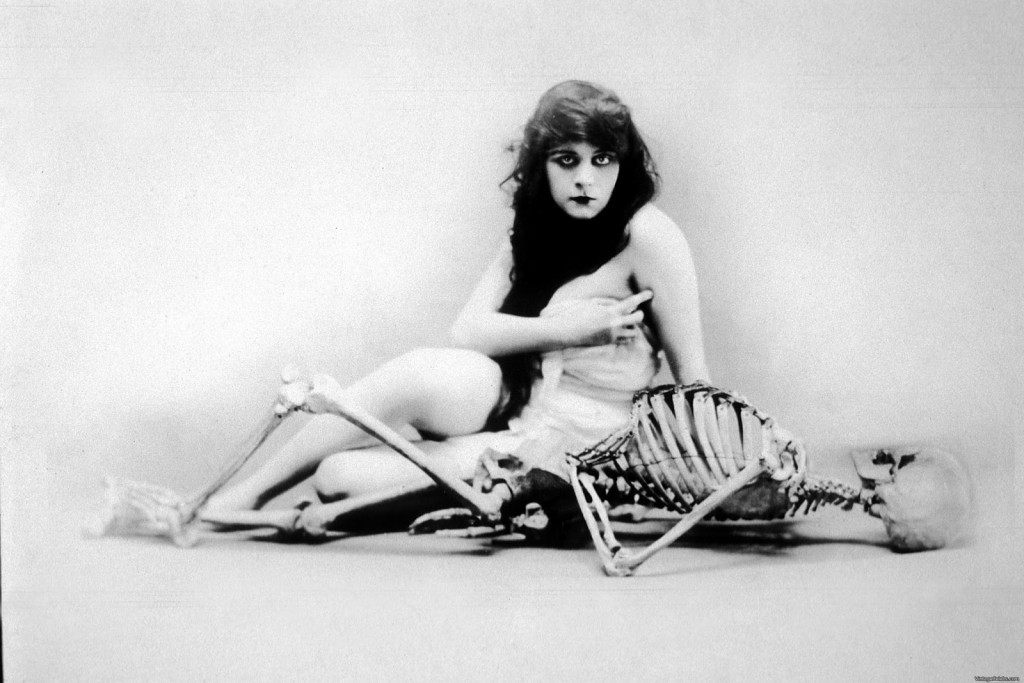 One of my personal favorites that made it to the top ten taps into something quite visceral: the femme fatale — who will always have a place in popular culture. As does the vamp. In this post, I trace a bit of the history of both. Click here to read post.

8. BAD THINGS COME IN THREES: THE WEIRD SISTERS OF DRACULA 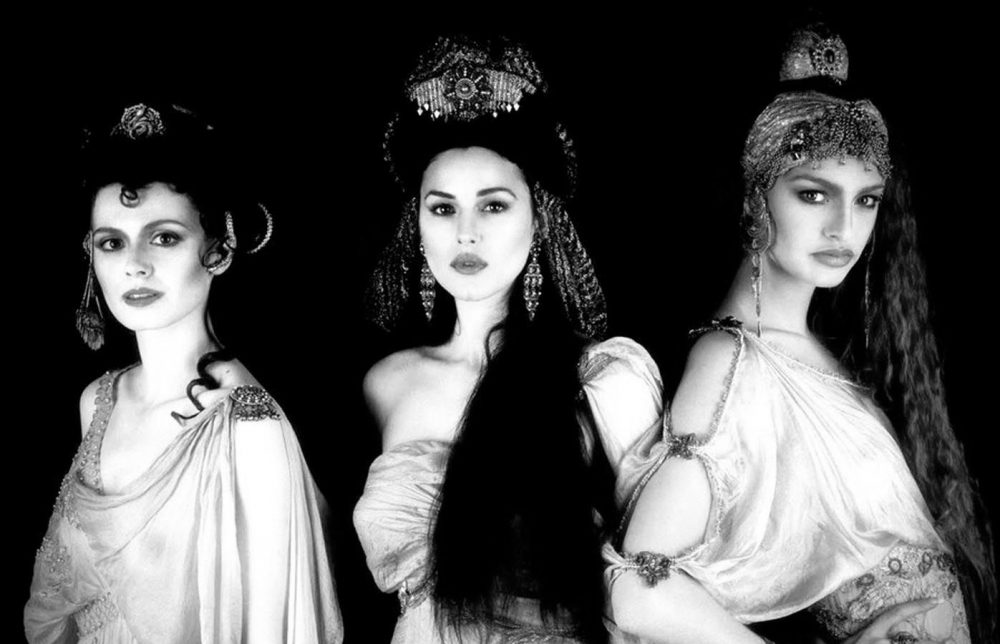 Call them sisters, daughter, wives or brides, there are three vampire women in Bram Stoker’s DRACULA. Is the number significant? I think so. Click here to read post.

9. SINISTER CLAUS: A TRADITION OF TERROR AT CHRISTMAS 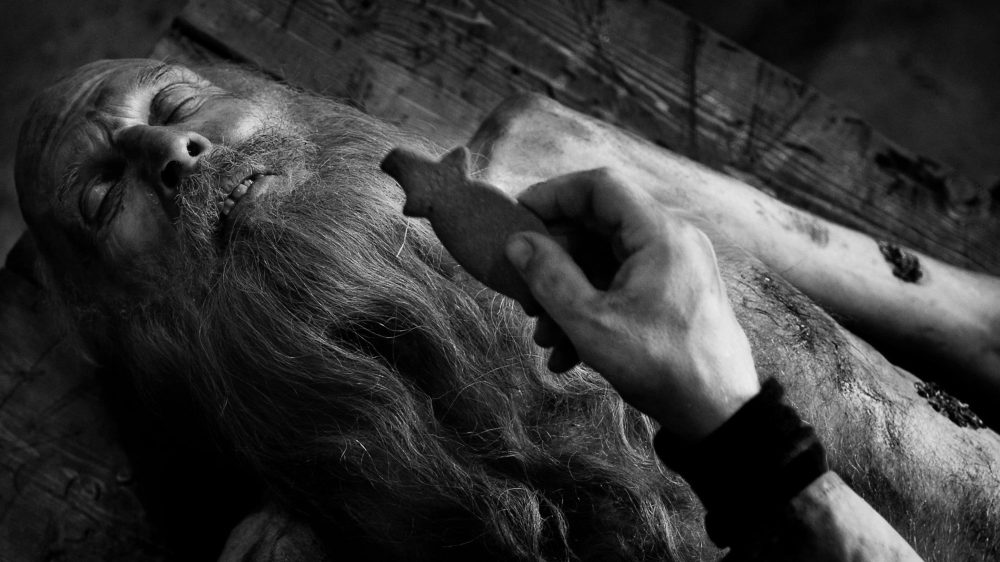 The second of my Christmas-themed posts to make the top ten,  this post explores how the Santa Claus of popular imagination can be downright scary. Click here to read post. 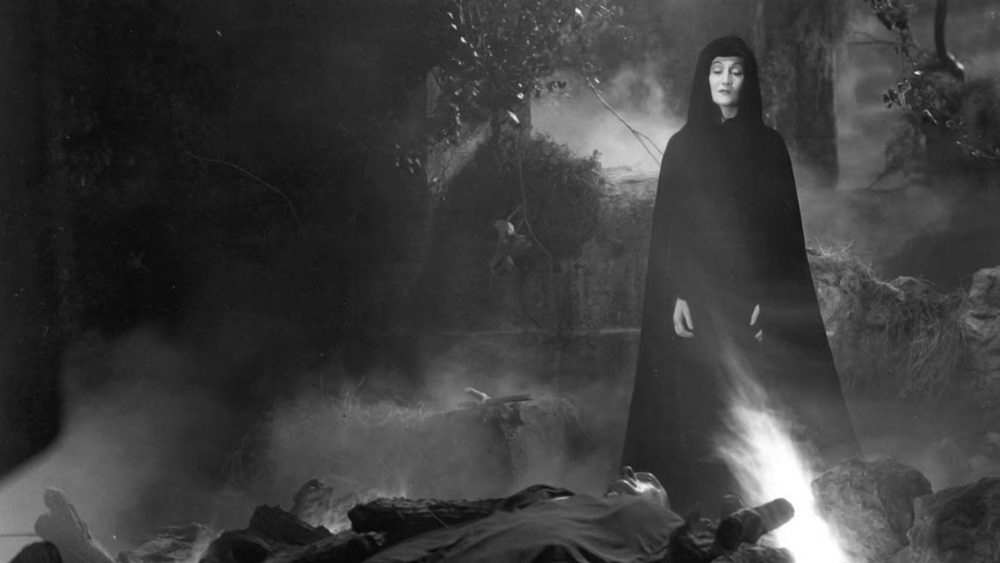 A companion piece to the post dedicated to the women of Hammer horror, this tenth most popular entry acknowledges that while Karloff and Lugosi made for Universal’s better known monsters, the studio created some equally memorable female characters. Click here to read post.

There you have it. Ten years, and the ten most popular posts from The Vault of Thoughts. If you’ve been with me since the beginning, you have my sincere thanks. And if you are new to this blog, start with one of the posts mentioned here. They account for 37% of my site’s traffic. It is my hope that you will find at least one you like.